Covid could cause erectile dysfunction: Study finds coronavirus in the penises of two men SIX MONTHS after they recovered and doctor says it did ‘pretty severe’ damage to sexual performance

Coronavirus can cause erectile dysfunction months after a man has recovered from the illness, according to a study.

Miami University scientists scanned the penis tissue of two recovered Covid patients aged 65 and 71 who were struggling to get erections.

And, in what they claimed was a world-first, they found the virus was still lingering in there more than six months after they had been sick with Covid.

One of the men had been seriously ill and admitted to hospital but the other only had mild Covid, suggesting anyone infected may be at risk.

The virus is known to be able to damage blood vessels and internal organs, and this research suggests it can block blood flow to the genitals, making it difficult to have sex.

It may do this by triggering swelling and dysfunction in the linings of tiny blood vessels that run through the body and into the penis. 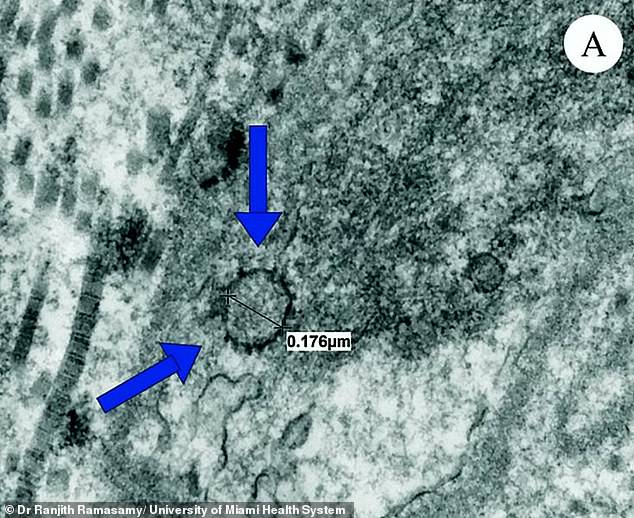 The Covid virus (indicated by the blue arrows) is seen in tissue inside the penis. Scientists zoomed in to 10 nanometers – or 0.000001 of a centimetre – to spot it and said its presence may raise the risk of erectile dysfunction 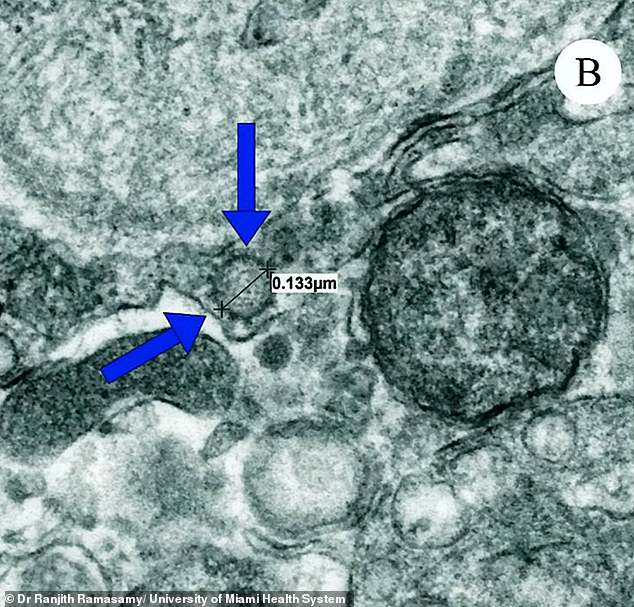 The virus was also spotted in a separate patient. Miami University scientists checked samples from two men with erectile dysfunction who had had Covid for the virus

Dr Ramasamy, a urologist at MU, added: ‘This suggests that men who develop Covid infection should be aware that ED could be an adverse effect of the virus.

‘They should go to a physician if they develop ED symptoms.’

The study was likely too small to prove a link between Covid and erectile dysfunction because it only included two men – it is not clear whether the virus enters the penis every time someone catches it.

And it is also not yet known whether the coronavirus being in the penis was causing the problem or whether it was a side-effect of damage elsewhere in the body.

Both of the men were past middle-age and one had high blood pressure and heart disease, which increase the risk of erection problems.

More than one in five men who catch Covid may be affected by erectile dysfunction afterwards, estimates suggest.

Scientists have suggested several theories to explain why the dysfunction may be happening.

The virus – SARS-CoV-2 – is known to cause inflammation, which restricts blood flow.

Arteries and veins leading to the penis are small and narrow, meaning that any inflammation could impede a man’s ability to get an erection.

Dr Channa Jayasena, a consultant in reproductive endochronology at Hammersmith Hospital in London, has suggested the issues may also be linked to disruption in hormone levels.

The virus can cause levels of testosterone to dip, which in turn could impact a man’s sexual arousal.

Experts say that anyone suffering from ED after a Covid infection should see their doctor.

But their tests were compared against samples from two other men who also had ED but had not been infected with the virus and levels of an enzyme involved in triggering an erection (eNOS) were lower in the Covid patients.

The Covid patients also had evidence of dysfunction in their blood vessel linings – called endothelial dysfunction – while the uninfected men did not.

Scientists zoomed in to 100nanometres – about 0.000001 of a centimetre – on the tissue to search for the virus and also carried out PCR tests to detect Covid, which were positive.

A medical student working on the study, Eliyahu Kresch, added: ‘These latest findings are yet another reason that we should all do our best to avoid Covid-19.

‘We recommend vaccination and to try to stay safe in general.’

The Miami study is not the first one to make the connection between Covid and erectile dysfunction, and research in Italy found it could happen to one in three men who get the virus.

Scientists in Rome asked 100 men who had recovered from Covid, with an average age of 33, whether they were suffering with arousals.

As many as 28 per cent said they were. For comparison, the rate was nine per cent among those who didn’t catch the virus.

Scientists have suggested the virus binding to ACE-2 receptors, which are present in the testes as well as the lungs, could lead to ED.

‘One of the devious ways the virus gets into the body is by its spike protein binding to a receptor found at quite high concentrations not only in the lungs but in the reproductive organs,’ said Dr Channa Jayasena, a consultant in reproductive endocrinology at Hammersmith Hospital, London.

‘When Covid binds to these receptors, they can no longer perform their normal function.’

Experts have also pointed to inflammation restricting blood flow as another possible cause, and to lower testosterone levels in those recovering from an infection.

The Miami University study was published in the World Journal of Men’s Health.