The Ethiopian Airlines plane that crashed on Sunday morning was carrying at least 19 United Nations officials, some of whom were en route to a major UN-sponsored environmental conference in Nairobi, Kenya.

The World Food Program, the UN Refugee Agency and the Food and Agriculture Organisation were among UN agencies reporting personnel losses. The casualty list also included a professor, the chief executive of a restaurant company and a Kenyan soccer official. 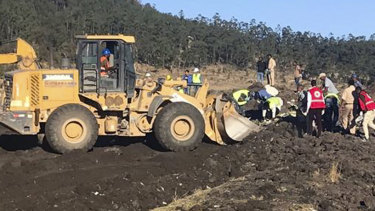 Rescuers use mechanical diggers at the site of an Ethiopian Airlines crash, south of Addis Ababa, in which 157 died.Credit:AP

French President Emmanuel Macron and UN Secretary-General Antonio Guterres are among those expected to attend the UN Environment Assembly set to begin on Monday, along with more than 4700 heads of state, ministers and executives.

Outcomes from the meeting are to set the global environmental agenda and boost chances of success in the Paris Agreement and 2030 Agenda, according to a UN press release on Sunday.

The Boeing 737 Max crashed shortly after take-off from Ethiopia's capital, marking the second deadly accident in five months for the new version of the company's bestselling jet. 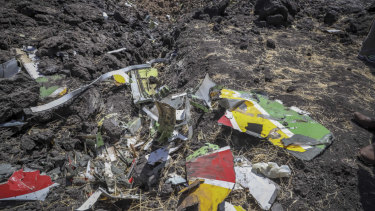 Wreckage lies at the site where an Ethiopian Airlines flight crashed shortly after take-off from Ethiopia’s capital, Addis Ababa, killing all 157 on board.Credit:AP

The passenger list includes 32 Kenyans and 18 Canadians, the largest two groups by nationality.

The crash comes as "devastating news", Canadian Prime Minister Justin Trudeau said in a tweet. He said in a later statement that the nation was offering consular assistance and working with Ethiopian authorities.

Macron extended his condolences to the families of the victims, which the airline said included seven French nationals.