This is the heart-stopping moment a motorist swerved in front of a cyclist to avoid an oncoming lorry.

The terrifying ordeal, shared by Avon and Somerset Police, was captured on camera by the cyclist, who can be heard yelling as he narrowly avoids being knocked off his bike.

Despite solid white road markings in the centre of the single carriageway, the grey BMW 3-series attempts to pass the bike as a huge oncoming HGV approaches. 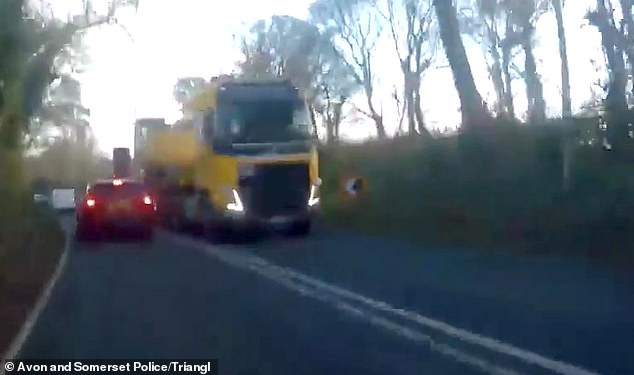 The view from the cyclist’s camera a second before a BMW 3-series squeezed into the rapidly shrinking space between the cyclist and the HGV coming in the opposite direction. Footage published by Avon and Somerset Police

The three vehicles only miss each other with inches to spare on the tiny road in South West England.

Avon and Somerset Police called it one of the worst close pass reports they had ever received.

The footage was shown in court several times this week to obtain a conviction against the motorist.

The driver was convicted, receiving nine penalty points on their licence along with a £660 fine, £66 surcharge and another £110 in costs. 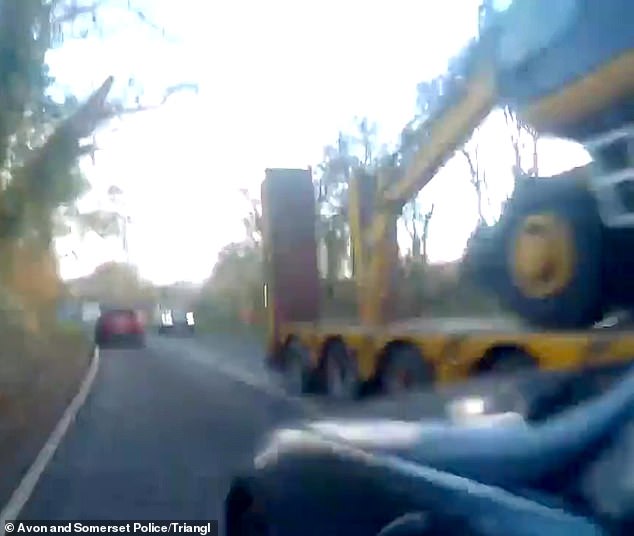 The BMW 3-series narrowly avoids a head-on collision with the HGV by screeching in front of the bike, causing the cyclist to shout out in terror as he is nearly swept away

One stunned viewer commented: ‘They shouldn’t be on the road.’

Another added: ‘So close, and so dangerous.’

Police are asking for anyone involved in such cases to report the incident.

The incident mirrors an episode that occurred on September 9 on the A5189 in Burton upon Trent, Staffordshire, when a driver nearly mowed down crossing pedestrians after having overtaken an HGV at speed.

Despite ‘merge in turn’ markings the car driver overtook the HGV at speed and didn’t see the pedestrians crossing until the last moment.

The car used a right-hand filter lane to speed past the truck before nipping in ahead of the HGV when the driver finally spotted the three pedestrians.

Two of those attempting to cross the road pulled back, one narrowly avoiding being struck by the car which was forced to brake heavily.