The death toll after an unexpected snowstorm trapped a group of Alpine hikers in southwestern Switzerland increased to six, Swiss police said today.

The victims were identified as five Italians and one Bulgarian woman.

The regional Valais police department said one other person remains in critical condition following the sudden blast of snow and high winds in the Pigne d’Arolla region, about six miles west of Switzerland’s famed Matterhorn peak.

The storm left a total of 14 hikers spending the night from Sunday to Monday out in the cold with no shelter. 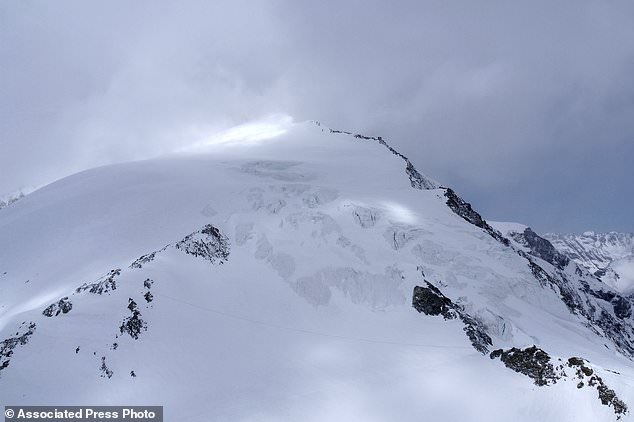 This undated picture provided by the Police Valais, shows Pigne d’Arolla mountain near Arolla, Switzerland. The storm left a total of 14 hikers spending the night from Sunday to Monday out in the cold with no shelter

Two Italian couples – in their mid-40s and mid-50s – also died from hypothermia after being evacuated to the hospital in a rescue operation involving seven helicopters.

The sixth victim was a 59-year-old Italian man, who was guiding a group of 10 hikers and fell to his death at the site.

Police said a 72-year-old Swiss woman, a 56-year-old French woman, and a 43-year-old Italian woman remained in hospital on Tuesday.

The sudden bad weather trapped two groups of hikers who had been trying to reach the Vignettes hikers’ hut at 10,357 feet in the Alps, forcing them to spend the night exposed to the elements amid freezing temperatures.

In a separate incident in Italy, authorities said two Italian skiers fell hundreds of feet to their deaths during while skiing in the Dolomite mountains, in the province of Belluno, Italy’s Ansa news agency said.

The two skiers were described as experienced members of Alpine rescue squads, but who were doing recreational skiing Tuesday when they fell.