Triple-digit highs were felt in Arizona, Utah, Colorado, Nevada as well as in California, where Gov. Gavin Newsom signed an emergency proclamation on Thursday over concerns regarding energy grid capacity.

In Nevada, the NWS and forecaster AccuWeather said Friday high temperatures in Las Vegas would peak at a toasty 114 degrees, challenging records dating back to 1940.

In a release, the WMO noted that the extreme temperatures were part of a trend due to climate change, with heat waves “more frequent and more intense.” 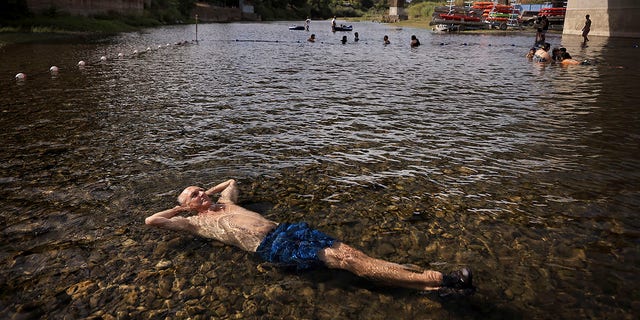 Gerry Huddleston of Santa Rosa, Calf. cools off in the very shallow water of the Russian River, Wednesday, June 16, 2021 at the Veterans Memorial Beach in Healdsburg, Calif. An unusually early and long-lasting heat wave brought more triple-digit temperatures Wednesday to a large swath of the U.S. West, raising concerns that such extreme weather could become the new normal amid a decades-long drought. (Kent Porter/The Press Democrat via AP)

Climatologists and scientists continue to warn that longer duration and more severe heat waves could be “the new normal,” citing dry soil from the region’s “megadrought.”

“When the soil is wet, heat waves aren’t so bad,” the University of California, Los Angeles’ Park Williams, a climate and fire scientist, told The Associated Press on Friday. “But if it’s dry, we are under extreme risk.”

California’s Cal Fire has warned that the state has continued to “experience an increase in wildfires and acres burned” in 2021 “compared to last year.”

In 2020, the state saw more than 4.2 million acres burn – an unprecedented statistic.

Real relief for millions of residents was not expected through early next week, with temperatures forecast to locally shift from the desert Southwest, California and Great Basin to the interior Pacific Northwest.

However, the NWS WPC noted that a cold front was expected east of the Rockies.