Deputy head banned from teaching after sexual relationship with pupil

Assistant head, 49, is banned from teaching after having sexual relationship with 14-year-old female pupil for over a year

An assistant headteacher has been banned from teaching for having a sexual relationship with a 14-year-old pupil.

Spencer Radford, 49, was reported to Cheshire police in 2018 by one of his former pupils, who claimed to have had an ongoing sexual relationship with her teacher for more than a year.

The investigation was dropped by Cheshire police, but a subsequent investigation by the government’s Teacher Regulation Agency found the allegations to be proven.

Radford had the young schoolgirl stay over at his house, and told another pupil that he was in love with the girl.

She told the investigation that outside of school ‘they would be a couple’, but that they were ‘always looking over their shoulders’.

A Cheshire Police spokesman told MailOnline there are no plans to reopen the case, and the victim involved ‘did not support prosecution’.

The teacher of 26 years had worked at Thomas Adams School in Wem, Shropshire, since 2006 and was most recently employed there assistant headteacher. 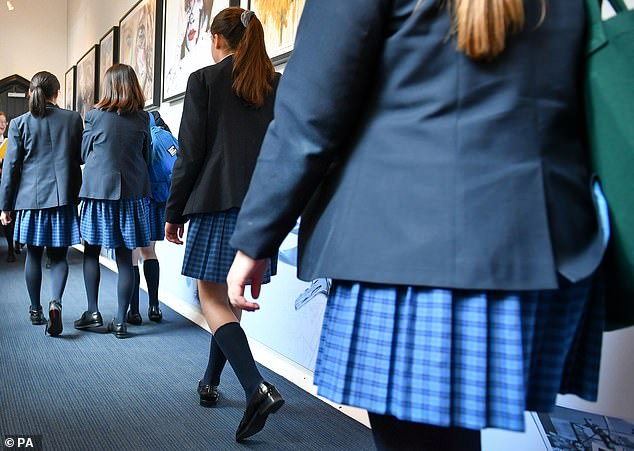 Radford had the young schoolgirl stay over at his house, and told another pupil that he was in love with the girl (stock image)

However, the relationship with the pupil took place while employed at his previous school, believed to be in Cheshire, where he worked between 1995 and 2006.

The relationship had begun in the late 1990s, starting when the girl was 14.

The former pupil, referred to by the Teacher Misconduct Panel as Pupil A, said the relationship ‘fizzled out’ before her 16th birthday.

The report from the panel states: ‘Pupil A in her written evidence said that when she was at Mr Radford’s house she spent time snuggled on the sofa with him watching films. As the relationship progressed Pupil A said that they progressed to kissing.’

They then moved on to sexual activity, the report says.

‘Pupil A told the panel that it ”took a long time, like any normal relationship would, the only thing not normal was the teacher and pupil part and the age gap, everything else was normal everything progressed really slowly – I was young, it was all firsts it probably took a long time”.

‘Pupil A in her evidence said she and Mr Radford thought that when she left school ”they would be a couple”.’

The pupil, who reported Radford three years ago when in her 30s, said at the time as a schoolgirl it ‘felt normal’ but after looking back she ‘realised it wasn’t normal’.

Radford admitted to the allegations of exchanging text messages with the pupil, giving lifts to her and entering the girl’s home with her.

Allegations of sexual activity, staying overnight with the pupil and commenting that he was in love with her were denied by Radford but found proven by the Teaching Regulation Agency misconduct panel.

As a result he has been banned from teaching indefinitely at any school, sixth form, relevant youth accommodation or children’s home in England.