Detectives are searching for a hit-and-run driver who left one person dead and another with life-threatening injuries after striking several workers with a car in Melbourne’s south-east.

Major collision unit investigators are looking for the driver of a red Holden that hit several people near Carrum Downs at about 7.15am on Tuesday. 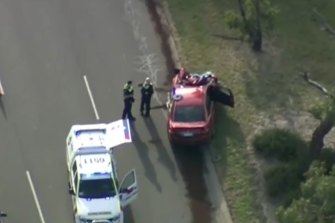 A hit-run car crash has left one man dead and another seriously injured in Carrum Downs.Credit:Nine News

Emergency services attended the scene at the corner of Hall Road and Lats Avenue where one person was killed. A second victim was airlifted to hospital in a stable condition with multiple injuries.

Police have not yet formally identified the dead person.

The driver, who police said appeared to be Caucasian and aged in his 30s, left the scene on foot. Investigators pursued him with help from the air wing.

Witnesses told investigators that after the crash the driver got into a black Hyundai SUV which was then seen travelling east of Ballarto Road, a main road that runs through Carrum Downs, at about 7.45am.

On Tuesday morning the scene was strewn with traffic cones and other materials. About a dozen emergency service personnel were in attendance.

A witness who gave his name as Rick said it appeared two people working on the median strip were struck. “They’d put their cones out and the car had gone through them and into the back of the truck,” he told 3AW.

“Someone … was helping one of the arborists across to the nature strip, and he looked in a pretty bad way, but the other poor fella … he was deceased.”

The Department of Transport said Hall Road was likely to remain closed in both directions between the Frankston-Dandenong Road and McCormicks Road.

Police are urging anyone who witnessed the collision or with dashcam footage is urged to contact Crime Stoppers on 1800 333 000 or submit a confidential crime report at www.crimestoppersvic.com.au