Experts say it’s extremely difficult to work out what effect an overnight curfew had on reducing Melbourne’s case numbers during its second wave, but say it’s likely the reintroduced measure limits overall movement.

The return of 9pm to 5am stay-at-home directions by the Victorian state government on Monday reignited debate about curfews, with the state opposition describing it as an “unnecessary overreach” and the police union and peak civil liberty group Liberty Victoria also opposing. 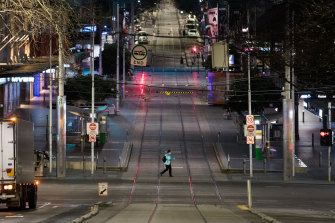 Concerns have also been raised about the disproportionate effect tough enforcement measures such as a curfew could have on groups such as those from non-English-speaking backgrounds, people in insecure work and young people, with many still struggling to pay hefty fines dished out during last year’s lockdown.

Some health experts have backed the tough restrictions, warning they were the only way for Victoria to avoid following NSW into a disastrous coronavirus outbreak, while others have been more sceptical about the efficacy of a curfew in spreading of the virus.

Experts involved in modelling of COVID-19 for the Victorian and federal governments said it was hard to work out what effect the curfew had during the second wave last year because it was introduced in August 2020 as part of a package of measures, which included a five-kilometre travel limit and limits on exercise.

“So it’s difficult to pull apart,” said the University of Melbourne’s Jason Thompson, who worked on the Victorian government’s epidemic modelling.

Rohan Byrne, who has spent much of the last 18 months tracking mobility across Melbourne, said the entire package “certainly did have an emphatic and immediate effect”. “But we didn’t hit rock bottom until the tightening of the ‘essential businesses’ criteria a week later.”

Victoria is the only state or territory that has imposed a curfew as part of lockdown restrictions.

A paper published in Nature Human Behaviour in November, looking across 79 countries, found movement restrictions – which included curfews – had a small but significant effect on limiting the spread of COVID-19.

Research funded by the state government found it was mandatory masking that made the largest difference in controlling Victoria’s second wave. Physical distancing – which includes the effects of curfew – played a lesser role.

“It is very hard – read: impossible – to decouple all the effects and get curfew on its own,” said Dr Michael Lydeamore, a Monash University researcher and co-author of the research.

Despite that, Dr Thompson, Mr Byrne, Dr Lydeamore and Monash University’s Professor James Trauer all told The Age they thought it was likely curfews did cut overall movement.

But Professor Nathan Grills from the School of Population and Global Health at Melbourne University said he had concerns a curfew could be counterproductive due to the risk it could encourage more people to be out in the community at the same time.

“There’s a risk that you actually increase people interacting because it’s less time to shop, less time to exercise,” he told ABC Radio Melbourne. “So it may help with enforcement … but it’s hard to see it from public health point of view really being an effective intervention on top of stage four.”

In general, most studies concluded curfews cut mobility – but how important they were compared to other interventions was impossible to calculate, said Associate Professor Nic Geard, a University of Melbourne researcher who contributes modelling to the federal government.

Last year, Premier Daniel Andrews said the decision to impose a night-time stay-at-home direction was introduced only to make it easier for police to enforce the general lockdown. However, police later said they had not asked for the new rule. Chief Health Officer Brett Sutton at the time also said the curfew decision has not been based on his advice, nor that of health officials.

The messaging around the announcement of a curfew this week has been different. On Monday, Professor Sutton said the evidence for curfews was also hard to tease apart from the suite of interventions imposed at the same time, but emphasised they were necessary to reduce movement.

Chief Commissioner of Victoria Police Shane Patton on Tuesday said he had been told on the weekend that a curfew was being considered and that he was supportive of the measure.

The introduction of a curfew and talk from police of a “crackdown” on rule-breakers has also concerned some within the community legal sector. Megan Pearce, a lawyer at Fitzroy Legal Service, said they were concerned about the use of policing as the primary component of the public health response. 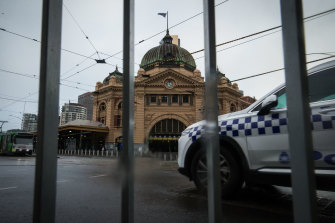 Melburnians woke up to tougher lockdown measures on Tuesday.Credit:Getty Images

“We are generally concerned about all measures that rely on police enforcement, like a curfew, because these will always risk impacting over-policed communities the most,” she said.

Tiffany Overall, advocacy and human rights officer at YouthLaw, said she was concerned about the way the curfew would be enforced, and called on police to continue to apply discretion when it came to young people, particularly those who are homeless or fleeing family violence.

“We are obviously still very, very concerned with the huge volume of older COVID fines which are unaffordable, unpayable for a whole lot of community members, including a large number of young people. That’s causing enormous amounts of stress,” she said. “If it was a really strong police response in the next little while … it’s going to be really, really problematic.”

George Selvanera, the acting chief executive of the Victorian Aboriginal Legal Service, said they did not agree with the implementation of a curfew. “You can’t police your way to zero transmissions,” he said.

“In Aboriginal and Torres Strait Islander communities across Victoria, we see an overwhelming desire to comply with the rules. What is so clearly needed is support and resources for everyone to comply, not a punitive approach the serves only to increase fear and distrust of the government.”