STARTLING footage has emerged of hundreds of elderly people stuck in a huge covid vaccination queue in near-freezing temperatures.

Some of the "fragile" patients were reportedly told they would have to wait in the cold for up to three hours for their jab at a GP surgery in South London. 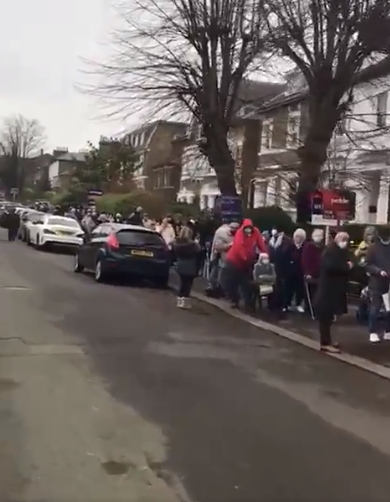 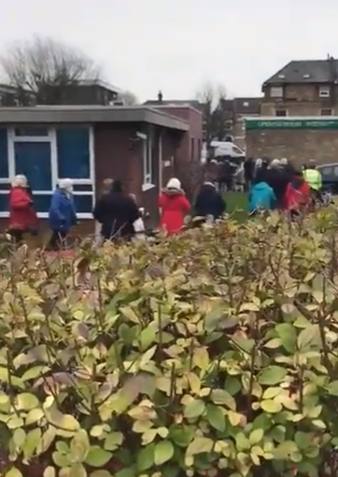 The Jenner Practice, in Forest Hill, opened its doors to those aged 80 and over on Friday – and was quickly deluged with patients.

Those standing in the staggering line, which ran down a road leading up to the clinic, were seen wrapped up in hats and scarves.

Others had brought chairs so they could rest their legs. Many were accompanied by carers and relatives.

Paul Demetrious posted the video on Twitter after his mum and dad attempted to get vaccinated as the temperature dropped to just 2C.

He called the situation a "circus" and said his parents – who had been isolating for almost a year – eventually left without getting their jabs.

He also pointed out that many of those on his startling video had no chance to socially distance.

"We shared this not as a witch hunt – although our mother was extremely upset – but for answers so that lessons can be learned to improve," he told LBC.

"My parents received a call from their doctor who I have to say is an amazing, thoughtful and caring professional who has been a rock for them over many years through tough times."

However, some of those to have seen the clip point out that the vaccination roll-out is still in its early days and there were always going to be teething problems. 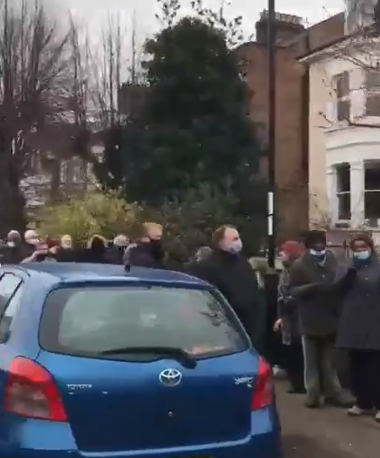 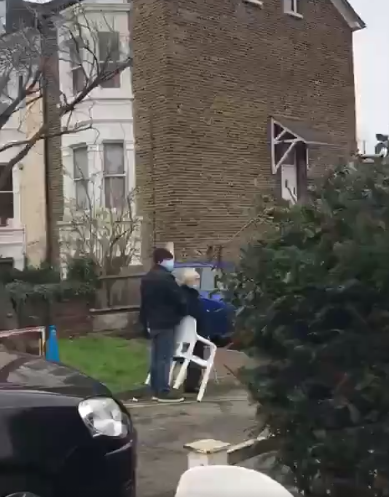 Others were also extremely concerned the worrying images could put the elderly off going for their vaccinations.

One wrote: "My heart goes out to all the hard working surgery staff and the poor patients."

Another added: "I would rather a full vaccine centre than an empty one tbh."

Andrew Richards said he had an appointment for his mother at 1pm on Friday but was told it would be a 3 hour wait outside in the queue.

He told LNO: “They have a tough job there but as soon as my mum heard they were getting a batch, I knew it was going to be busy.

“There must have been between 300 and 400 people in the queue. Some of them looked really fragile and frail, standing around with blankets around them.

“My mum’s appointment was supposed to be 12noon but when we got there they said it was going to be a three-hour wait.

“We had to go straight back home because my mum cannot stand for more than a few minutes.

“The queue was about 150-200 yards long. They looked like refugees standing around in the cold."

After seeing the video, medical chiefs were quick to apologise to Mr Demetrious and insisted changes would be made. 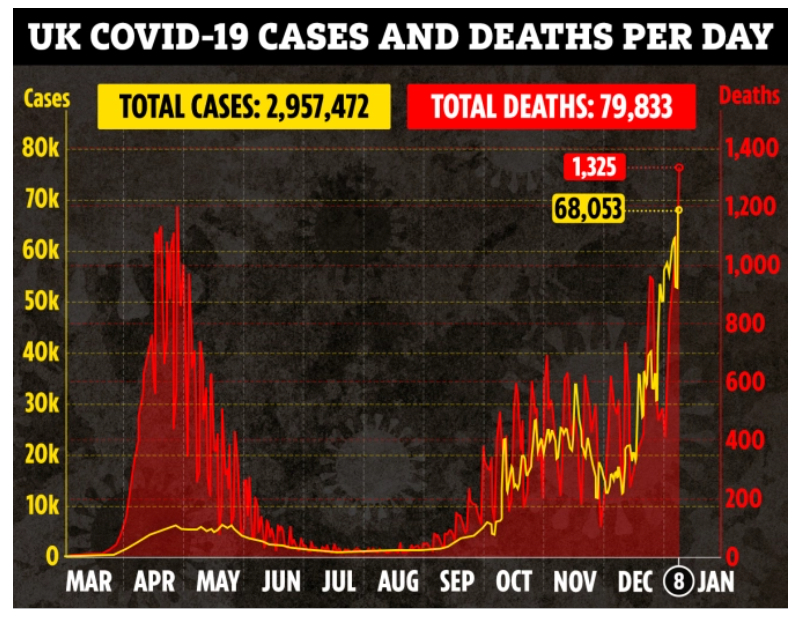 NHS Lewisham CCG tweeted: "We’re sorry your parents faced this situation. This was the first vaccination day for the service, lessons have been learned.

"Vaccinators doubled to reduce waiting time; patients asked to arrive 5 minutes before appt. These will ease queues and hopefully reassure your parents."

The Care Quality Commission (CQC) also thanked Mr Demetrious for raising the issue and said that it has launched a review.

It said: "Thanks for bringing this to our attention. The matter has been raised to the appropriate Inspector for review."

The footage was posted online as a major incident was declared in London with hospitals at breaking point as Covid cases continue to rocket.

Mayor Sadiq Khan urged people to wear masks "routinely" outside their homes as one in 30 Londoners is now infected.

He said the NHS is "on the cusp of being overwhelmed" with more than 7,000 Covid patients in London hospitals — almost 2,000 more than the first peak last April.

The numbers of people on ventilators has almost doubled since Christmas day – with 47 per cent more patients in intensive care, the Mayor said.

And he warned hospitals will run out of beds in "in the next couple of weeks" unless the spread is slowed down "drastically".