As he absently blundered into tables at a food festival, he appeared to be nothing more than a harmless old man.

But the antics of Titus Jelea, 64, were a deliberate ruse to distract people as he swiped their cash, purses and wallets.

The technique was working well for the thief until a former mayor playing amateur sleuth trapped him with his own ingenious trick – persuading the crook to pose with him for a picture.

The photograph placed Jelea at the scene of the crime and would prove decisive in getting a conviction. 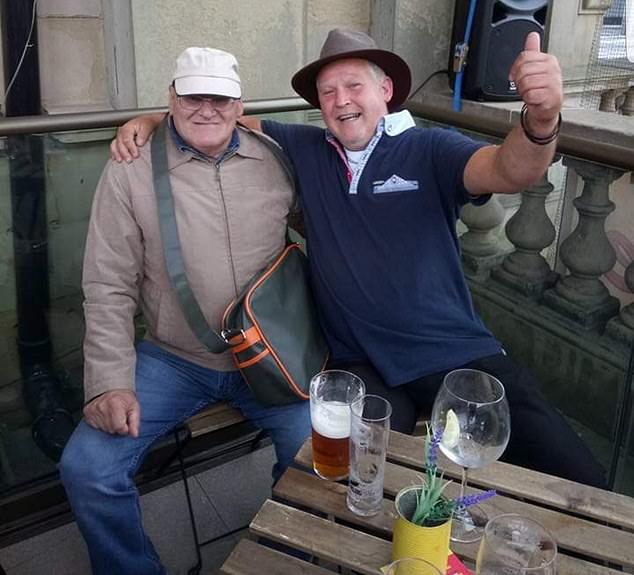 Titus Jelea (pictured right with Paul Barton) played the part of a harmless old man as he swiped cash, purses and wallets at Accrington Food Festival

Ex-mayor Paul Barton had been at Accrington Food Festival with friends when he became suspicious about Jelea.

He had seen police appeals about a distraction thief in the Lancashire town and, after spotting Jelea peering into women’s handbags, he tempted Jelea into approaching him by leaving his wallet on the table.

When the trap was sprung, he persuaded Jelea to have his picture taken.

Mr Barton, 44, mayor of nearby Hyndburn from 2009 to 2010, then asked friends to continue watching Jelea while he went to the police station.

When Jelea was later arrested he denied being at the food festival – until shown Mr Barton’s picture.

The Romanian migrant, who came to the UK in February under EU freedom of movement rules despite serving time for dishonesty and violence in his home country and France, was charged with thefts at the festival and around the town.

Preston Crown Court heard one of his distraction techniques was to squirt tomato ketchup over his victims before going to them telling them they were bleeding and pretending to help them.

Jelea was jailed for two and a half years after pleading guilty to seven thefts and one attempted theft. He will be deported to Romania to serve his sentence.

Mr Barton, now a funeral director in Oswaldtwistle, said: ‘I knew immediately this man was up to something and mentioned it to Town Hall staff but they thought no 60-year-old man would do anything like that.

‘I sat with my friends and never took my eyes off him.

‘He was operating like Paul Daniels doing a magic trick – he was very clever moving things around on tables and stealing while people were distracted.

‘He was putting the cash into a satchel he was wearing. When he came up to our table, I started talking to him then said to a friend, “Take our picture”.

‘Jelea tried to cover his face with his cap but several pictures were taken and we got a good one.’

The court heard Jelea’s victims included a 92-year-old woman robbed of £100 near a cashpoint and a woman, 89, robbed of £500 after he followed her home from a bank.

He had stolen cash and a silver chain from a market stallholder, and admitted stealing £70 from two sisters at the food festival.