Face masks could be made mandatory inside

Will face masks NOW be compulsory in all shops? Matt Hancock says they are an ‘important part of our armoury’ – after top scientist warned that Britain is lagging behind other Western countries in its use of the coverings

Face masks could become compulsory in shops after the Health Secretary acknowledged they are an ‘important part of our armoury’.

Matt Hancock confirmed that he would be reviewing the evidence particularly as the virus is so transmissible in crowded places indoors.

His comments came after a leading scientist warned that Britain was lagging far behind other Western countries in the use of face masks.

Professor Sir Venki Ramakrishnan, president of the Royal Society, the UK’s national academy of science, claimed many remained overly sceptical about the coverings. 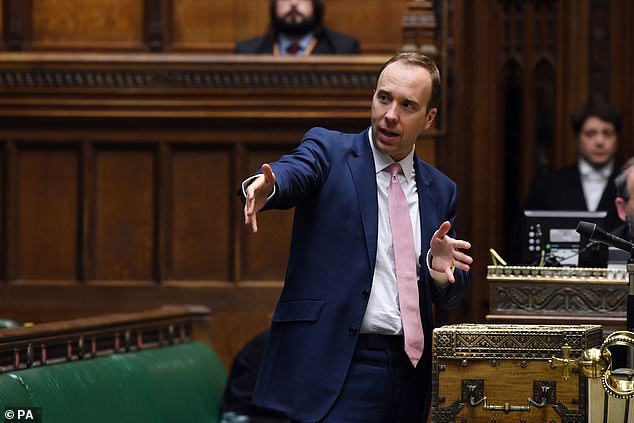 UK Health Secretary Matt Hancock is pictured answering a question related to coronavirus in the House of Commons, London yesterday.  Hancock confirmed yesterday that he would be reviewing the evidence on whether face masks should be made mandatory indoors

Scotland will make face masks mandatory in shops from Friday although First Minister Nicola Sturgeon has urged customers to get into the habit of using them sooner. In the Commons yesterday Mr Hancock was asked by Labour MP Clive Betts whether he would reconsider the guidance for England.

Mr Betts said: ‘Will he look again at the lack of any advice on wearing face masks in supermarkets and other shops, as surely it’s just as easy to catch the virus in a supermarket queue as in a bus?’

The Health Secretary replied very simply ‘yes’ he would. He also confirmed he would be looking into whether people who didn’t have to wear coverings on public transport for medical reasons, for example, should be forced to display badges.

Later, when discussing the wearing of face masks more generally, he added: ‘The use of face coverings that are not formal face masks is valuable especially in some circumstances and therefore it’s mandated on public transport and it has been long recommended in some shops.

‘Face coverings are an incredibly important part of our armoury.’ 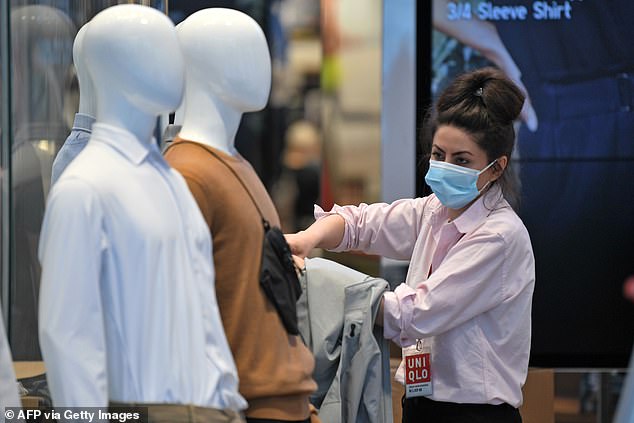 A Retail worker wearing PPE (personal protective equipment), including a face mask as a precautionary measure against COVID-19, works in the window display of a UNIQLO store on Oxford Street in London on June 12, 2020

A Department of Health source said that while Mr Hancock was not planning on issuing any immediate guidelines on wearing face masks in shops, the issue was being kept under constant review.

And a Downing Street spokesman said: ‘Face coverings can help us protect others and reduce the spread of the virus if people are infected but not showing symptoms.’

Yesterday Professor Ramakrishnan said not wearing face masks should be considered anti-social, akin to drink driving or not wearing a seatbelt.

His own research found just 25 per cent of Britons had used a face mask as of April compared with 83 per cent in Italy and 66 per cent in the US.

He said: ‘The public have taken to handwashing and distancing but remain sceptical about face coverings.

‘You only need to go on public transport, where they are supposed to be mandatory, to see how many people are ignoring this new rule.’