High-street fashion chains Oasis and Warehouse have collapsed into administration, putting 2,000 workers at risk across 92 branches and 437 concessions.

The chains are expected to appoint auditor Deloitte to run their administration after coronavirus lockdown forced them to shut their 90 UK stores.

The brands, which are owned by the failed Icelandic bank Kaupthing, also have 437 concessions in department stores including Debenhams and Selfridges.

And thousands of jobs at Debenhams may be at risk after the High Court ruled its administrators could be liable for furloughed staff’s full wages.

Debenhams appointed administrators last week for the second time in the past 12 months.

The retailer’s 142 UK stores remain closed in line with Government guidance and the company has said it will work to ‘re-open and trade as many stores as possible’ when restrictions are lifted. 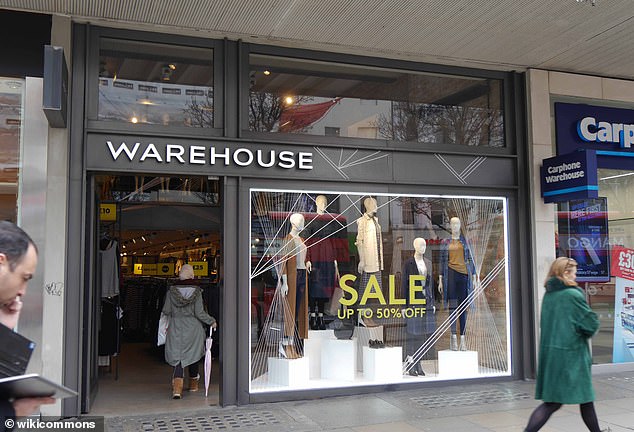 The collapse of Oasis and Warehouse today comes three weeks after they started discussions with prospective buyers following an approach from an unnamed company.

The businesses have been struggling along with many of the UK’s high street retailers which have been forced to close all their stores due to the virus outbreak.

Deal talks with prospective buyers fell through with the uncertainty caused by the pandemic thought to have made a sale impossible to conclude, reported Sky News.

The administrators are expected to furlough most of the employees soon after talks began with potential buyers.

Around 13,000 of its employees in the UK are currently being paid under the Government’s job retention scheme (JRS), which covers 80 per cent of the salaries of furloughed staff up to £2,500 a month.

Administrator FRP says ‘it is necessary to ‘mothball’ the business during the Covid-19 pandemic in order to seek to rescue it in the months to come’, and that it wants to continue paying furloughed staff under the JRS.

However, lawyers representing FRP said it may be forced to make ‘a large part of the significant number of employees of Debenhams’ redundant if it is responsible for staff wage liabilities.

The administrators applied to the High Court for a declaration that the contracts of staff who had been furloughed prior to their appointment would not be ‘adopted’ by FRP.

Under insolvency law, if an employee’s contract is ‘adopted’ wage liabilities enjoy ‘super-priority status’, meaning they are payable before the expenses of the administration and the claims of creditors.

So, FRP applied for a declaration that any potential wage liability should be limited to the 80% of wages which will be reimbursed by the Government under the JRS. 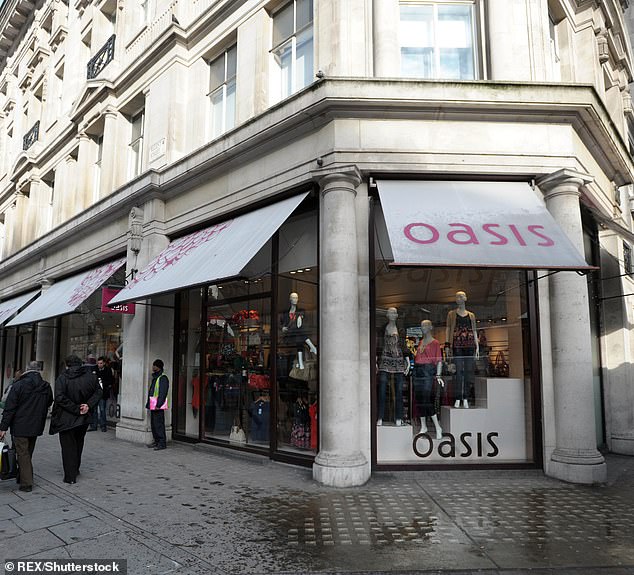 But, following a remote hearing on Wednesday, Mr Justice Trower refused to make a declaration, saying: ‘I think it is likely that the participation by companies in administration in the JRS and the payment of equivalent amounts to furloughed employees … means that the contracts of employment … will have been adopted by the administrators.’

During the hearing, FRP’s barrister Tom Smith QC said that, if the contracts were considered to have been adopted, the administrators would have to decide ‘whether they are able to adopt the employment contracts of all or some of the furloughed employees, or – as seems more likely – will be compelled to make the majority of them redundant’.

Just 4,200 companies have been able to get the Government’s emergency bailout loans – out of 300,000 applicants.

The worrying figures emerged despite the scheme already being overhauled once earlier this month when firms complained they could not access the cash. Business owners have warned the failure means they could go bust.

Around £800million has been handed out under the package – a figure which pales in comparison with £146billion provided to 725,000 firms in the US.

Lord Mervyn King, former governor of the Bank of England, said: ‘Something has gone wrong. The economy will only recover if we can keep businesses running and able to pick up the reins when this crisis is over.’

Banks have been overwhelmed by demand since the launch of the Coronavirus Business Interruption Loans Scheme last month.

They have been accused of refusing loans due to complex eligibility criteria. More than two-thirds of the loans, 2,500 in total, have been approved by state-owned bank RBS.

Business Secretary Alok Sharma said: ‘We have set this up at pace and everyone is working around the clock.’

He added that such a decision would have to be made before the end of the ’14-day grace period’ from the appointment of administrators on April 9.

Mr Smith said that ‘unsurprisingly’ Debenhams’ business has been ‘very severely impacted by the Government-required closure of its retail estate’.

He added that ‘some limited trading currently continues online’, amounting to just under 20% of Debenhams’ usual trading revenues, but ‘even that trading is threatened with closure as a result of the Covid-19 measures’.

Mr Smith submitted: ‘There is significant uncertainty as to when this will change and when an exit from administration can be achieved.’

He said Debenhams’ workforce ‘will have an important role in ensuring the viability of the future business and continued trading in the future’.

But he added that FRP are ‘unlikely to be able to justify continuing to employ the furloughed employees … if there is exposure to liabilities for wages or salary – enjoying super-priority over other claims – over and above those that will be reimbursed under the JRS’.

The court heard that the total cost of Debenhams’ salary and benefits payments to employees was approximately £18 million a month prior to employees being put on furlough, and that the company has ‘sufficient cash available to make the required payments for a period of at least the next payroll period, and possibly further periods’.

Meanwhile, Next returned to selling clothes online after the retailer put extra safety measures in place to ensure warehouse staff can work safely.

But by 9am the website had closed again, saying it had already received all the orders it could process for the day, but it would return tomorrow.

The retail giant closed its online operations in late March amid the coronavirus crisis, following criticism from staff who felt unsafe at work. 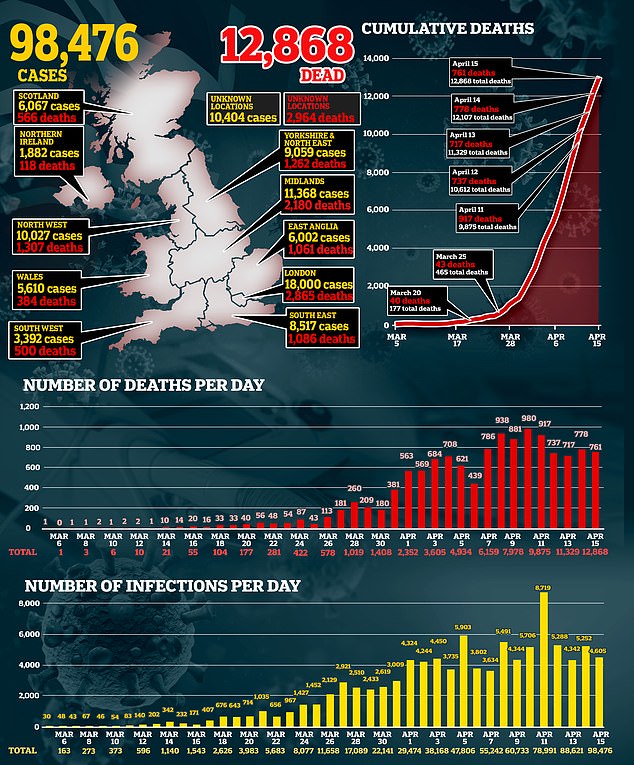 Behind the scenes, bosses have been upgrading warehouse space and limiting workers to accommodate the Government’s distancing measures.

The coronavirus pandemic is expected to change the look of high streets for ever, with famous names like Laura Ashley having already gone.

Yotam Ottolenghi, in May 2018 in London

Top chef Yotam Ottolenghi has warned that restaurants are being threatened by landlords with eviction for unpaid rent during the coronavirus lockdown.

Mr Ottolenghi told BBC Radio 4’s programme today: ‘The biggest worry that we have is rent. When corona started and we were asked to close our doors, which is totally understandable because of safety, nobody really addressed the issue of the rents.

‘Many, many have not been paying rents. Others have got into arrangements with their landlords, but this has not been solved.

‘Some landlords have been threatening to prosecute and other legal actions against the tenants at restaurants in such a time because they are not paying their rents, and landlords, many of them, rely on the rent to pay their own debts.’

He is calling on the Government to give restaurants a ‘litigation ceasefire’ with a debt enforcement moratorium for six months in which credit action is banned.

Mr Ottolenghi said this would mean business owners cannot be litigated against to pay rent – and the same for landlords who can’t pay their mortgages.

He has also suggested a ‘national timeout’ of nine months rent free from April to December in which landlords would also be compensated.

Many national chains are unlikely to re-open hundreds of stores which were already struggling as a result of a shift to online shopping.

Many town centres will have to switch their focus towards leisure, entertainment and housing, with shopping streets turned to residential use.

The number of visits to high streets, shopping malls, parks and other leisure resorts dropped by 85 per cent as the lockdown cut in the second half of last month.

Debenahms  said its Irish business, which runs 11 stores with around 1,400 staff, will cease trading. It will continue to trade online in Ireland, the UK and Denmark.

Construction too is suffering, while consumer confidence has dropped at the most rapid rate since the darkest days of the 1970s.

The Centre for Economics and Business Research has predicted that the lockdown is costing the economy £2.4billion a day, equivalent to 31 per cent of national output.

Elsewhere on the high street footwear chain Clark’s said last week a small number of its 347 stores may never open again once the lockdown is over.

The crisis on the high street has already claimed the likes of restaurant chain Carluccio’s and homeware store BrightHouse.

Figures last week also showed how the rot caused by widespread closures and social distancing measures was spreading into manufacturing and construction.

The sales of new cars fell 44 per cent in the last month, according to figures from the Society of Motor Manufacturers and Traders.

There were 203,000 fewer new cars registered in March compared to the same month 2019 after coronavirus forced the closure of showrooms.

This marked the most dramatic decline for the key month of March – when new number plates are released – since the late 1990s.

The UK’s automotive industry was already struggling from falling sales blamed on weak consumer confidence and confusion over what fuel technology to buy.

Car manufacturers including Nissan, Jaguar LandRover, and Vauxhall have mothballed their factories in the UK and across the world.

At the same time confidence among UK consumers, already low due to political uncertainty over Brexit, plunged at the most rapid rate since records began in 1974.

The numbers reflect the concerns of economists who have said the economy may be shrinking at a faster rate than the Great Depression of the 1930s.

Nearly 3,000 gyms and leisure centres face closure with loss of 100,000 jobs as landlords use loophole to threaten eviction for unpaid rent during lockdown

Nearly 3,000 gyms and leisure centres face the threat of closure after landlords threatened them with eviction for unpaid rent during the coronavirus lockdown.

Up to 100,000 jobs could now be at risk with trade body UKActive calling for urgent action to protect places of exercise which remain shut as the pandemic continues.

Fresh legislation to protect commercial tenants was brought in last month, but it does not stop landlords forcing them to pay rent withheld due to the lockdown. 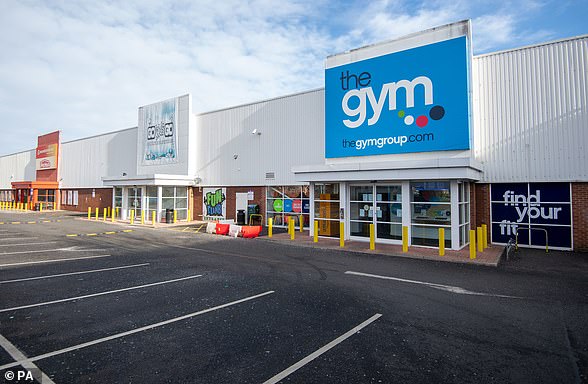 He said yesterday: ‘A worrying number have decided to pursue statutory demand notices or winding up orders.

‘We need the Government to act now to direct within the Act that landlords cannot do this. With 2,800 gyms at risk of permanent closure, and 100,000 jobs at stake, time is of the essence.’

Section 82 of the Coronavirus Act 2020 introduced on March 25 intends to help protect commercial tenants by banning the forfeiture of commercial leases until June 30 – or longer if the Government deems necessary – for non-payment of rent.

But it does not stop landlords taking action such as rent arrears recovery, making a debt claim, issuing a statutory demand, or starting winding-up proceedings. 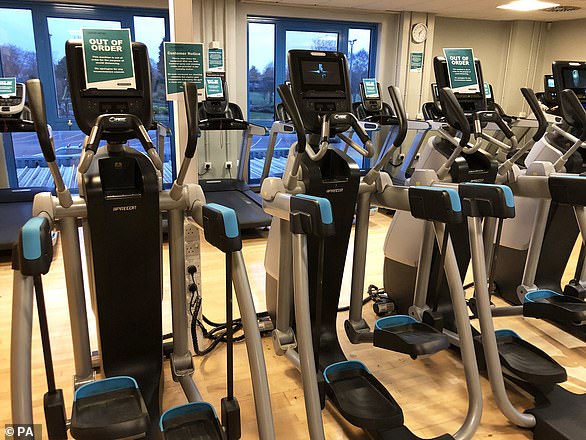 Notices on exercise equipment at a gym in Long Eaton, Derbyshire, notifying customers of social distancing measures on March 20, the day that all gyms in Britain were closed down

UKActive therefore wants the Government to amend the Act so landlords cannot purse legal action, and introduce financial support for them for a rent holiday.

In one case, David Lloyd Leisure asked a landlord for a waiver of rent due on March 25 until it can reopen its clubs, but the landlord replied by threating legal action.

The chain’s chief executive Glenn Earlham told BBC News : ‘This situation is unfortunately entirely outside of our control.

‘We want to work together with landlords to ensure we can survive this pandemic and emerge with businesses able to continue to pay rent and other costs in the future.’

And PureGym chief executive Humphrey Cobbold said: ‘Time is of the absolute essence, given that proceedings such as statutory demands and winding up orders threaten to force companies into insolvency within days of being issued.’