Father, 34, is jailed for 16 months after breaking lockdown rules and restraining order to accuse mother of his two children of dating other men

A father who broke lockdown rules to harass the long suffering mother of his two children has been locked up for 16 months.

Stuart Edge, 34, was arrested after he clambered through an upstairs bedroom window in the dead of night to ambush Nicola Skidmore as she was sat in bed with their eight-year-old daughter.

As the little girl looked on, Edge, from Stalybridge, who also has a younger child with Miss Skidmore, grabbed the victim’s mobile phone and falsely accused her of dating multiple men before pushing her into a chest of drawers. 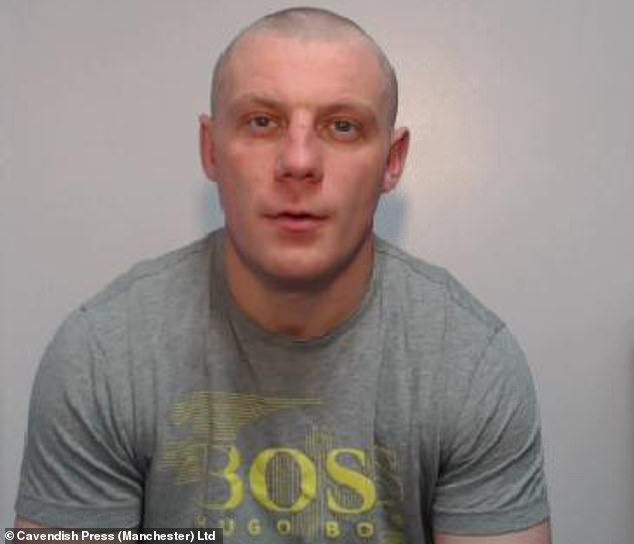 Stuart Edge, 34, was sentenced to 16 months in jail for breaking a restraining order and lockdown rules to harass the mother of his two children

He then fled her home with the device before agreeing to return it later via Miss Skidmore’s mother.

The incident last month was the third time Edge had ignored a two-year restraining order which had banned him from contacting her.

At Minshull Street Crown Court, Manchester, Edge admitted affray, battery, and breach of the order. He was also banned from contacting Miss Skidmore for a further five years under the terms of a new restraining order. 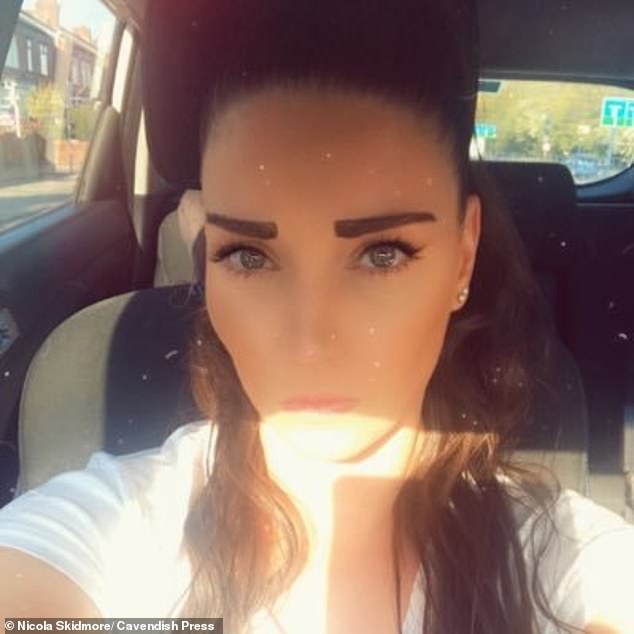 Nicola Skidmore, 33, was ambushed by her former partner while in bed with her daughter

The court heard the couple had been in a seven-year relationship but split in 2018 following a series of rows.

In that same year local JPs imposed the restraining order against Edge after he was convicted of battery against Miss Skidmore having kicked down her front door, grabbed her and accused her of seeing other men.

He was then jailed in May 2018 for 18 weeks for breaching the order by phoning her and going to her home.

In April 2019 he went back to prison for a further 18 weeks for a second breach.

The latest incident occurred at 11pm on April 20 after 33-year old Miss Skidmore was in bed with her daughter watching TV and looking at a mobile phone.

David Lees prosecuting said: ‘Edge suddenly appeared at the bedroom window having climbed up onto a flat garage roof accessed from the back garden.

‘Miss Skidmore was startled and screamed his name but he snatched her mobile phone and when she tried to retrieve it, he lapped her across the face. He began ranting about her seeing other men, then pushed her causing to fall into a chest of drawers.

‘Her daughter was present throughout. Miss Skidmore said she was shocked and scared and didn’t know what he was going to do next.’ 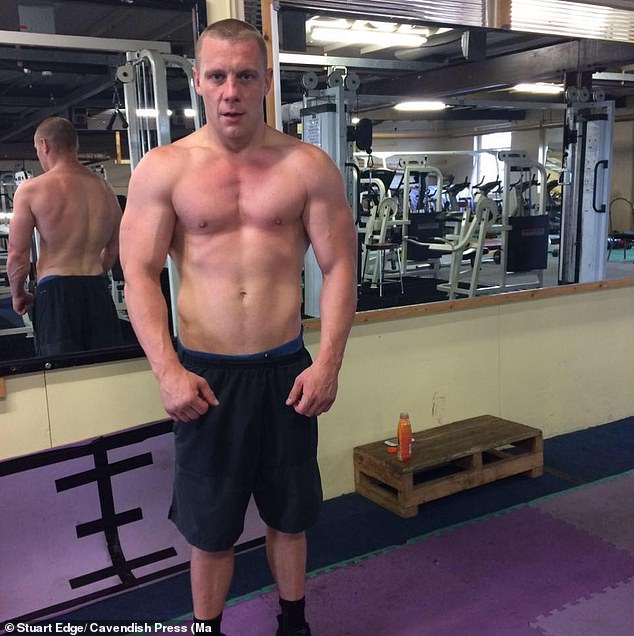 Edge fled the house whilst Miss Skidmore went to a neighbour’s house to ring police. The victim’s mother then rang her daughter’s phone, Edge answered and they agreed to meet up so he could hand back the device. He was arrested later but refused to answer questions in police interview.

In a statement Miss Skidmore said: ‘This has left me really shaken up. I am scared of Stuart and what he might do. He’s had a massively negative influence on my life over the years and I don’t want him ruining my daughters’ lives too.

‘He has had nothing to do with them and has never made an effort to be a proper father to them. The fact he has breached the restraining order for the third time obviously shows he has no regard for it or for me and my daughters.

‘I just feel every time he does something like this I am put back to square one wondering when he will do it all again and I’m scared of what he will do next. Just when I think he’s out of my life he starts up again. All we want is for him to leave us alone and stay away from us.

‘Whilst I am aware he has been locked up, I am already scared about what might happen when he is released. That’s always in my mind when he is arrested because in the past he just starts kicking off again.

‘He’s unpredictable and violent and when uses cocaine it make things even worse. For him to come round out of the blue and burst into my bedroom window is just mad and frightening and shows how out of control he can be.’

Edge had 34 offences on his record including robbery, theft, burglary and wounding.

In mitigation defence counsel Miss Nicola Gatto said: ‘He has struggled to come to terms with the end of the relationship. When he is under the influence of drink and drugs, his paranoia about what she is doing is significantly exacerbated.’

Sentencing Judge John Potter told Edge: ‘Not surprisingly Miss Skidmore was terrified at what you were doing. She screamed and I have no doubt your child was also caused considerable alarm as well.

‘But you were angry once more and snatched the mobile phone and made completely groundless allegations against Miss Skidmore. She went to remonstrate with you but you slapped her across the face and pushed into as chest of drawers.

‘It was an upsetting incident for Miss Skidmore and her child and she is terrified of your behaviour towards her and remains scared as to her future wellbeing should you be at liberty.

‘This was yet another incident of violent bullying and controlling behaviour by you and this is not the first time you have sought to control her behaviour in the sanctity of her own home.’