Flytipping has hit a record high – up 16 per cent on last year to 1.13 million cases – which threatens to ‘turn Britain into a giant rubbish dump,’ Government figures have revealed.

But authorities have failed to use their legal powers to stop the desecration of towns, cities and countryside as the number of fines fell by half, to 1,313, from 2,672 the previous year.

London was the dirtiest area with 43 fly-tipping incidents per 1,000 people, followed by the North East at 31. The South West was the cleanest with ten.

Allison Ogden-Newton, of Keep Britain Tidy, said the figures were ‘disappointing’ and called for more to be done to stop flytippers ‘trying to turn our country into one giant rubbish dump’. 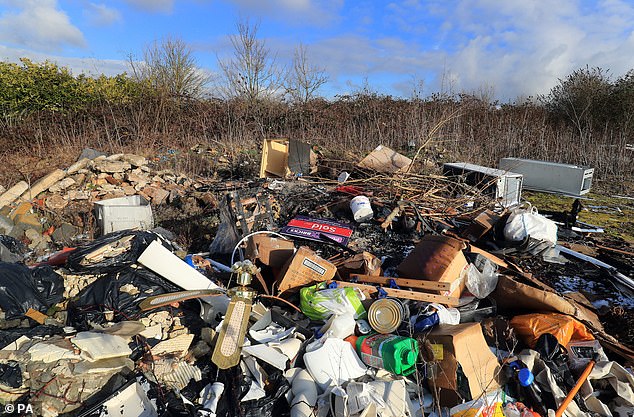 The number of fly-tipping incidents in England surged by 16% last year, but the number of fines dished out by courts to offenders fell by more than half, according to Government figures

Enforcement actions carried out by councils fell by 4 per cent to 456,000.

The most common quantity of rubbish to be dumped was equivalent to a small van load, accounting for just over a third (34 per cent) of total cases, followed by a car boot load at 26 per cent.

Around 39,000 cases of dumped waste were classed as enough to fill a tipper lorry.

Clearing up the large fly-tipping incidents cost councils in England £11.6 million, up from £10.9 million the previous year. 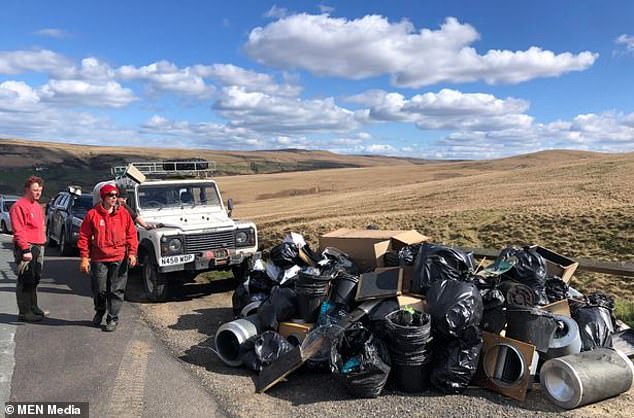 The Country Land and Business Association (CLA), which represents rural businesses in England and Wales, believes the figures probably only tell half the story, as they only cover fly-tipping on public land.

Mark Tufnell, president of the CLA, said: ‘Local authorities tend not to get involved with clearing incidences of fly-tipped waste from private land, leaving the landowner to clean up and foot what is often an extortionate bill.’

He added: ‘It’s not just the odd bin bag but large household items, from unwanted sofas to broken washing machines, building materials and even asbestos being dumped across our countryside.’