Two hikers got terrifyingly close to a sheer drop while climbing across a thin ridge more than 11,000 feet up a French mountain.

Elin Skyttedal, who lives in Swedish capital Stockholm, and her partner bravely climbed the exposed Aiguilles d’Entrèves in the Mont Blanc massif of the Alps in France.

Heart-stopping 360 camera footage shows Ms Skyttedal using her hands and feet to climb across the top of the narrow rocky ridge.

The experienced climber fearlessly moves across the thin ridge despite the terrifying drop of 11,800 feet on either side. 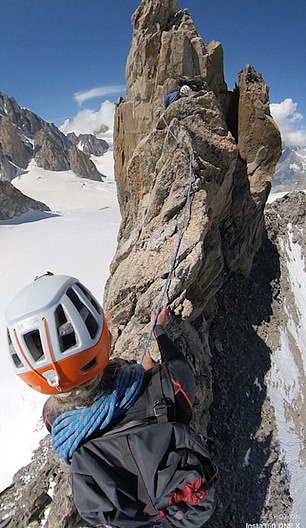 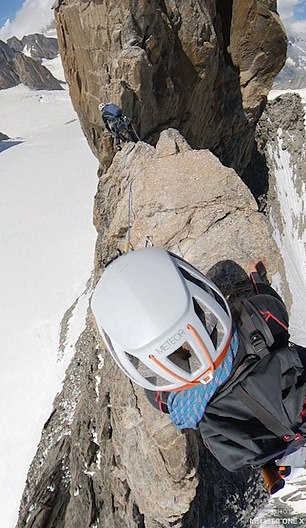 Elin Skyttedal, from Swedish capital Stockholm, climbed across the 11,800ft high ridge of the exposed Aiguilles d’Entrèves in the Mont Blanc massif of the Alps in France

Her partner is seen climbing further ahead on the traverse, with the mountaineers being joined together by a blue safety rope, the video shows.

Ms Skyttedal shared her jaw-dropping adventure on Instagram, where she regularly posts other nail-bailing snaps of her daredevil rock climbing.

She is also an avid skier and hopes to complete some more of the Alps’s 13,000 foot peaks, having already climbed across the Breithorn traverse.

Ms Skyttedal has also braved the popular Cosmique Arete climb, which is known for being an aesthetic ridge due to its orange granite.

But the climb demands a range of skills, including mixed climbing, rock climbing, route finding and abseiling. 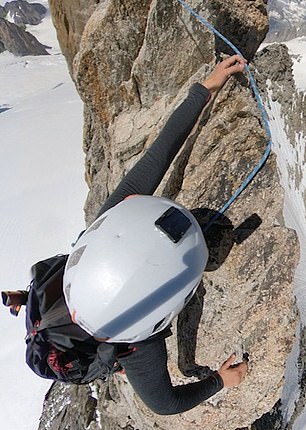 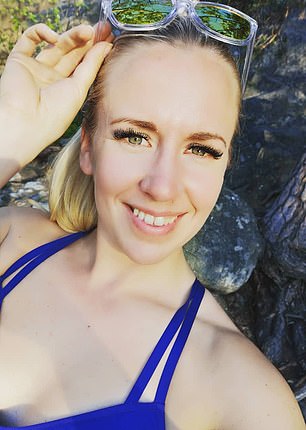 The jaw-dropping footage was filmed using a 360 camera, showing Ms Skyttedal (left and right) and her partner climbing across the narrow ridge with a terrifying drop on either side

The rocky summit of the Aiguilles d’Entrèves forms part of the frontier straddling between France and Italy.

The easiest way to ascend the mountain is using its north-east ridge from Col du Toule, which is a popular day-outing for many climbers.

The initial stage of the ridge is easier for climbers, with plenty of scrambling and opportunities to enjoy views of Mont Blanc.

But the ridge leading up to the summit is considerably more nail-biting as it runs along a knife-edge – not one to be recommended for those scared of heights.

The jaw-dropping footage was filmed on July 23 this year.