Footage shows culled badgers being dumped into buckets in barn

This disturbing footage shows piles of culled badgers being dumped each week in a barn before being loaded into a van to be incinerated.

Hidden cameras set up by campaign group Derbyshire Against the Cull caught badger killers using the barn, located in a sheep farm in Alport, in the Peak District.

Every day, ‘cull contractors’ would arrive to unload their kills, ‘casually dumping’ the dead animals into buckets which were then loaded into a van.

Then, a ‘body collector’ would arrive every weekday morning to taken the carcasses to be incinerated.

Ben Edward, spokesperson for the campaign group, said: ‘We are witnessing people who are getting away with murder.

‘I’m angry it is happening – I’m angry at the disdain and callousness shown to these animals. 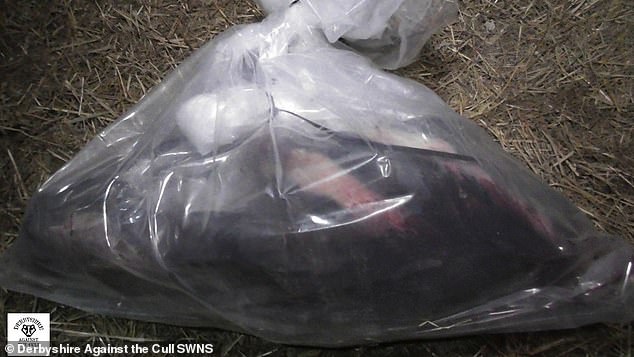 Dead badgers tied up and dumped in a barn in Alport, in the Peak District. The carcasses are thrown into buckets 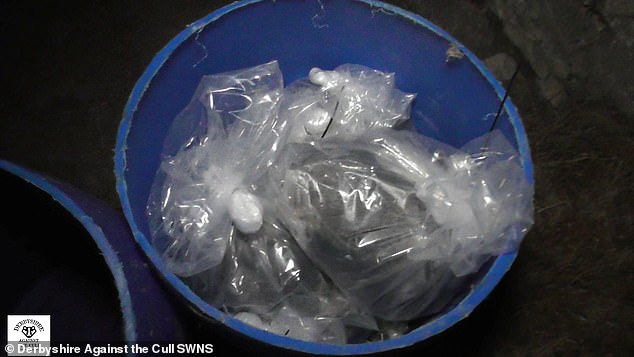 ‘They are killing a protected species who are iconic to the area.

‘If you watch the video it’s incredibly disheartening to see them casually dump these badgers on the ground, in these buckets, and then into the vans.’

Culling is a controversial method used in parts of the UK to reduce the number of badgers and thereby reduce the incidence and spread of TB.

The culling programme – involving a mix of shooting and trapping – was first trialled in 2013 in the south west then rolled out across other parts of the country.

Last month the Government announced it would be extended to Derbyshire.

Culled badgers are considered ‘hazardous waste’ by the Department for Environment, Food and Rural Affairs (DEFRA).

Sharing the footage, the campaign groups claim the barn violates European law which doesn’t permit for culled badgers to be disposed of in farms as they pose a risk to wildlife.

Mr Edward said: ‘Badgers killed in the cull are classed as hazardous waste and efforts must be made to ensure any disease will not be spread when carcasses are transported. 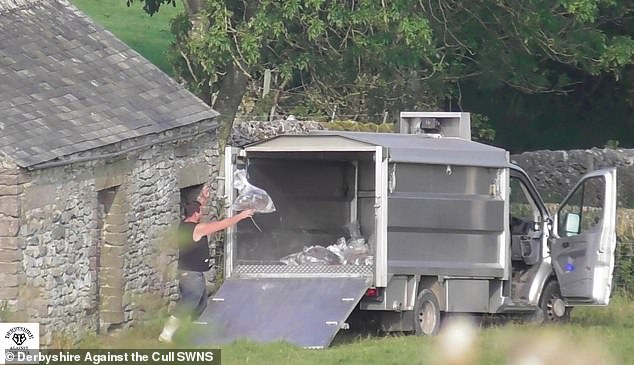 They are they transferred to a waiting van. A ‘body collector’ would then arrive every morning to take them to be incinerated 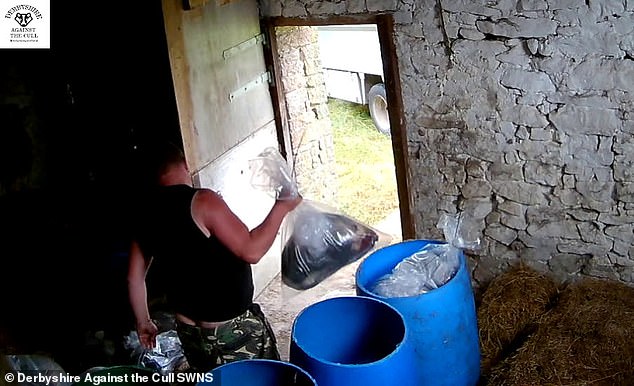 ‘Consider the large, open window to the barn, which is situated in a sheep field, surely this barn is in breach of both of these regulations?

‘Badger bodies, in plastic bags are collected daily, thrown in the back of a van, and taken for incineration.

‘This is the brutal reality that DEFRA and the NFU have tried so hard to hide from us, the British public.’

He added added: ‘Badgers, an iconic, native species, are being killed in their hundreds each day across England. Derbyshire hosts the country’s flagship badger vaccination programme, yet this atrocity is still happening.’

However Keith Harrop, owner of New Farm and the barn where the video was shot, said he was willing to ‘take stick’ by allowing his barn to be used because badgers were ‘massively out of control’.

He added: ‘I love wildlife as much as anyone and don’t kill anything without a reason We test our cattle for TB every six months but as soon as they’re out to graze again in the summer they pick it up from badgers. 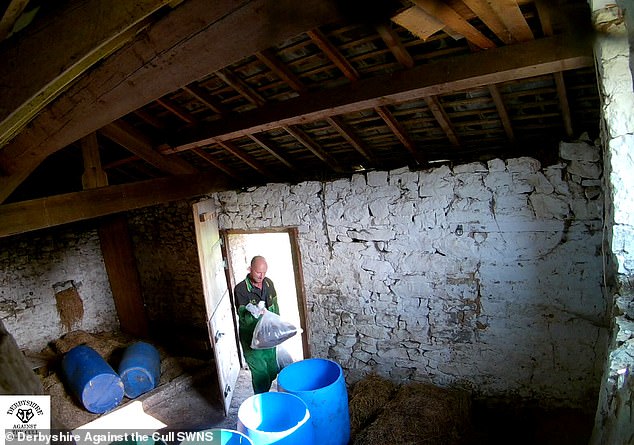 Keith Harrop, owner of New Farm and the barn where the video was shot, said he was willing to ‘take stick’ by allowing his barn to be used because badgers were ‘massively out of control’

‘Ever since they became a protected species it’s been a problem – if you have 20 rabbits in a field it’s fine but if you have 100 you have myxomatosis.

‘I’ve been affected by this as have most farmers around here and I’m so sick of losing cattle I’m willing to put up with a bit of stick.’

The cull in Derbyshire began in September and is expected to continue for at least two more weeks, with many other zones in the country continuing for longer.

Why are badgers culled in the UK?

Culling is a controversial method used in parts of the UK to reduce the number of badgers and thereby reduce the incidence and spread of TB.

It was first trialled in 2013 in the south west then rolled out across other parts of the country.

The programme uses a mix of shooting and trapping to cull the badgers.

Bovine tuberculosis is a disease of cattle that can also infect badgers, deer, goats, pigs, dogs and cats.

The disease is caused by the bacteria Mycobacterium bovis.

This is related to the microbe that causes tuberculosis in humans.

Bovine tuberculosis is typically transmitted aerially through coughs and sneezes.

Badgers are the most significant wildlife reservoir for the bacterium.

In the United Kingdom, most bovine tuberculosis outbreaks occur in the South West and the West Midlands.

There are now over fifty cull zones in England, despite the government announcing they would phase out the policy in March 2020.

Dominic Dyer, CEO of the Badger Trust, was appalled by the images which he says ‘lift the lid’ on the ‘brutal reality’ of the badger cull.

He labelled it the ‘biggest destruction of a protected species ever seen in Britain’.

He said: ‘These images from Derbyshire Against the Cull lift the lid on the brutal reality of the badger cull which is taking place across 11 counties of England stretching from Cornwall to Cumbria, in the biggest destruction of a protected species ever seen in Britain.

‘Boris Johnson intervened to stop culling in Derbyshire last year, but as he proudly boasts of protecting more habitats and species in Britain at a global UN summit this week, the reality is his Government are now pushing badgers to the verge of local extinction in areas of England which they have inhabited since the Ice Age.

‘The barn where badgers are being left has open windows which could easily be accessed by foxes who could get access to the carcasses.

‘It is also situated in a sheep field in contravention of hazardous waste rules, which state storage must take place away from livestock.

‘Some of the dead badgers being dumped in the barn, could have previously been vaccinated by the Derbyshire Wildlife Trust, under a publicly funded badger vaccination programme.

‘Vast majority of the badgers killed in the cull policy are not being tested for TB and over 90 percent are likely to be free of the disease.

‘The government could kill every badger in England, but bovine TB will remain in cattle herds due to unreliable TB cattle testing, bio security and cattle movement controls’

By November over 165,000 badgers could have been slaughtered in England as a result of the cull policy since 2013, at an estimated public cost of over £70 million.

WHY DID A PREVIOUS STUDY CONCLUDE THAT BADGER CULLS WERE BACKFIRING?

Researchers from the Zoological Society of London (ZSL) and Imperial College London tracked 67 badgers in different areas of Cornwall with different culling policies.

Published in the Journal of Applied Ecology, the research found that badgers visited 45 per cent more fields each month.

The odds of a badger visiting a neighbouring territory after a cull increased 20-fold, potentially increasing the risk of TB transmission to both cattle and other badgers.

The scientists said the changes were witnessed as soon as culling began, meaning even badgers that were killed may have first spread the infection over wider areas while management was being implemented.

However, the animals spent less time outside of their setts in culled areas – spending on average 91 minutes less per night out and about.

Researchers believe this could be linked to reduced competition and increased food availability as badgers are removed from the population.

Lead author of the study, PhD researcher Cally Ham, explained: ‘Badgers spend a large proportion of the night foraging for food above ground, and as culling reduces the size of the population, competition for food will also be reduced.

‘We believe this accounts for the reduced activity levels, as well as bold individuals becoming obvious targets for culling and being quickly removed from the population.

‘Because culling partly relies on shooting badgers moving around at night, the fact that badgers were active for fewer hours per night could actually be undermining culling efforts to further control badger numbers.’

Professor Rosie Woodroffe, at ZSL’s Institute of Zoology, added: ‘In contrast, studies have shown that vaccination prompts no changes in badgers’ ranging behaviour.’