France and Germany to propose sanctions on Russia after Navalny poisoning

Berlin: France and Germany will propose sanctions on individuals they deem responsible for the poisoning of Russian opposition leader Alexei Navalny, their governments said on Wednesday, local time, reiterating that they suspect a Kremlin involvement.

Proposals forwarded to European Union partners will also target an entity involved in the Novichok program, a joint statement from the French and German foreign ministries said. Navalny has been recovering in Berlin after falling ill from the nerve agent in Russia on August 20, spending weeks in a coma. 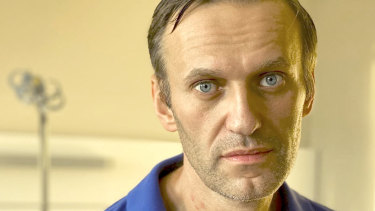 Russian opposition leader Alexei Navalny has been discharged from hospital after treatment for poisoning.Credit:Instagram/AP

The statement did not give further specifics on the possible targets for sanctions.

Moscow has dismissed claims of its involvement as "baseless" and has declined to investigate the incident, citing a lack of evidence.

"A murder attempt has been made on Russian soil, against a Russian opposition figure, using a military-grade nerve agent developed by Russia," the statement from France and Germany said.

"No credible explanation has been provided by Russia so far," it continued. "In this context, we consider that there is no other plausible explanation for Mr Navalny's poisoning than a Russian involvement and responsibility." 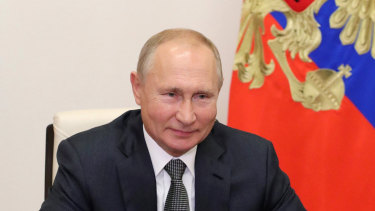 On Tuesday, the Organisation for the Prohibition of Chemical Weapons (OPCW) confirmed findings of German, French and Swedish laboratories that Navalny had been poisoned by a nerve agent in the same family as Novichok, a chemical weapon developed by the Soviet Union.

Traces in Navalny's blood and urine "have similar structural characteristics" as the toxic chemicals in the Novichok family, the OPCW said.

Novichok was also used in the poisoning of former Russian double agent Sergei Skripal and his daughter two years ago in Salisbury, Britain.

After Western intelligence linked that attack to Russian state security agents, the European Union sanctioned two Russian military intelligence chiefs and the two men Britain suspected of being responsible for carrying out the poisoning. The Trump administration imposed sanctions on a wide range of exports.

In his first media interviews, Navalny has directly blamed Russian President Vladimir Putin for the attack. "I assert that Putin was behind the crime," he told the German magazine Der Spiegel. "I have no other explanation for what happened.

Proposing individual sanctions indicates that the Nord Stream 2 pipeline may be spared.

The project, which will bring Russian gas to Germany under the Baltic Sea, has faced increasing scrutiny amid worsening relations between Berlin and Moscow.

But Navalny himself advocated for individual sanctions targeting oligarchs and other members of Putin's inner circle rather than punitive economic measures that could hurt everyday Russians.

"The most important thing is to impose entry bans on profiteers of the regime and freeze their assets," Navalny told the German daily Bild. "They embezzle money, steal billions and at the weekend they fly to Berlin or London, buy expensive apartments and sit in cafés."

In the interview, Navalny singled out Valery Gergiev, chief conductor of the Munich Philharmonic who supported Putin in the last election, and former German Chancellor Gerhard Schroeder, who now works for Russian energy firms.

Berlin has also accused Russia of being behind the brazen daylight assassination of Zelimkhan Khangoshvili, a Georgian citizen of Chechen descent, in a Berlin park last year. He had previously fought with Chechen rebels against Russia.

The 55-year-old Russian accused of carrying out the murder, named by prosecutors as Vadim K., went on trial in Berlin on Wednesday. "Our findings show this was a contract murder by Russian state authorities," prosecutor Ronald Georg told reporters.