So who wins Le Crunch? French chef JEAN-CHRISTOPHE NOVELLI compares Continental food and wine with British cuisine (and his verdict is more brutal than Brexit!)

Whether it’s a glass of crisp Chablis, a slice of spicy chorizo or a sliver of creamy brie, there are many European foods that have become part of the British culinary landscape.

So as the UK moves away from the EU, there’s never been a better time to check out the European favourites that many might be surprised to discover are made here, too.

And who better to wave the flag for British food than Michelin-starred French chef Jean-Christophe Novelli, who has lived here for 40 years. He insists the UK now produces high-quality versions of many European delicacies.

‘When I first came here trying to make a name for myself, I used to import 70 per cent of my produce. I had vans coming from Paris twice a week,’ he says. ‘Now I probably only need to bring in Italian olive oil, some smoked Spanish paprika and some vanilla. That’s it. It’s extraordinary!’ 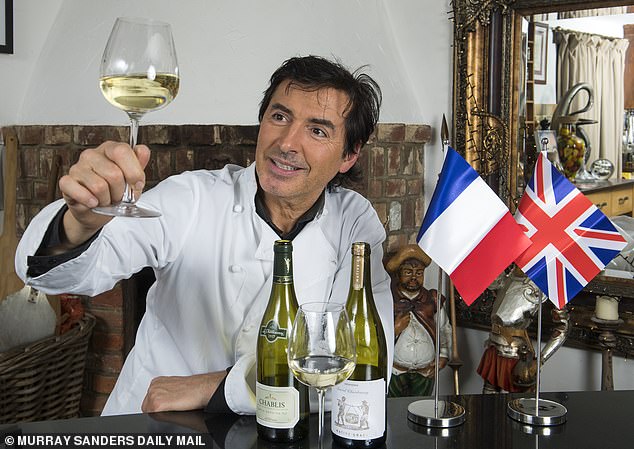 ‘There is no limit to what you can do here.’

So Libby Galvin challenged Jean-Christophe to pit the European classics against the best of Britain’s deli offerings in a blind taste test. But could he recognise which was which — and judge whether the UK can beat the European favourites at their own game?

jean-christophe’s blind-tasting verdict on French Chablis: ‘That would be ironic, a Frenchman who cannot recognise a Chablis, they will shoot me!’ he jokes. ‘But this is definitely a Chablis. Straightaway, this one is more fruity, more of the chardonnay grapes, you can smell it clearly. This is what a Chablis is supposed to be.’ 8.5/10

English Chardonnay: ‘Ah, this is not the same. This one is a little sharp, the other one is very fruity. In France because of the weather, the sunshine, the grapes have a little more time to sweeten. You can see it clearly in the richer colours, too. But well done, to produce a chardonnay in this cooler climate is impressive.’ 7/10 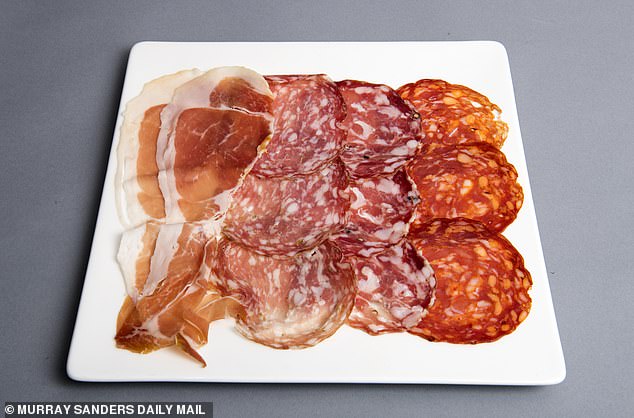 Charcuterie is the French word for cold cuts of meat. Classics include Parma ham, salami and coppa

MEAT THAT IS A CUT ABOVE

Italian charcuterie (from £1.95 to £4.25/100g, buongiornoitalia.co.uk) including Parma ham, Stoffolotto salami and ventricina vs a selection of British charcuterie, including spiced coppa, salami and ham (from £5.50/75g, tempusfoods.com)

Charcuterie is the French word for cold cuts of meat. Classics include Parma ham, salami and coppa.

Italian charcuterie: ‘These types of meat started around the Mediterranean, and it’s all about the spice, the pimento, the chilli. There is a touch of the sun in these. You’ve got Parma ham sliced so thinly it’s transparent, but some of the meat is quite greasy.’ 6/10

British charcuterie: ‘In terms of flavours, this is superior, although quite different with chestnut, cloves and pepper. I think this is the British plate, and it smells fantastic. The only problem is the thickness. If I was serving it I would cut it thinner.

Spanish chorizo: ‘This one has more colouring, the smell is impeccable. That is somebody trying to do better than something that already exists — so I think this is British, and it is superior to the other. The spicy kick is right there, bang!’ 9/10

‘In my restaurant in Belfast we have charcuterie from Corndale Farm just an hour away and, the first time I arrived, my chef said to me: ‘What do you think?’ I said: ‘You must have spent a lot of money to get it over from Spain.’ He said: ‘No, it’s Irish!’ It was the biggest lesson.’ 9.5/10

PASTA THAT’S THE PEAK OF PERFECTION

Tortelloni is a medium-sized pasta stuffed with cheese such as ricotta — a good one should not be too thick.

Italian pasta: ‘This is good, it’s consistent, the pasta is not chewy. I actually feel nostalgic, my grandmother used to make them, the same smell, the same expectation. This is obviously Italian like her. But this is not the best pasta in the world as it is ready made, it has to last on the shelf.’ 5.5/10

British pasta: ‘This looks plasticky. If this is Italian my grandmother will be screaming in her grave. But it has a good smell of spinach [tastes it] and ricotta — mmm, mmm! Mmmm mmm mmm! [Swears] Excuse the language, this is lovely. I thought the other one was Italian but now I don’t know . . . if this is the British product it is quite surprising.’ 6.5/10

CHEESES you can get a kick out of 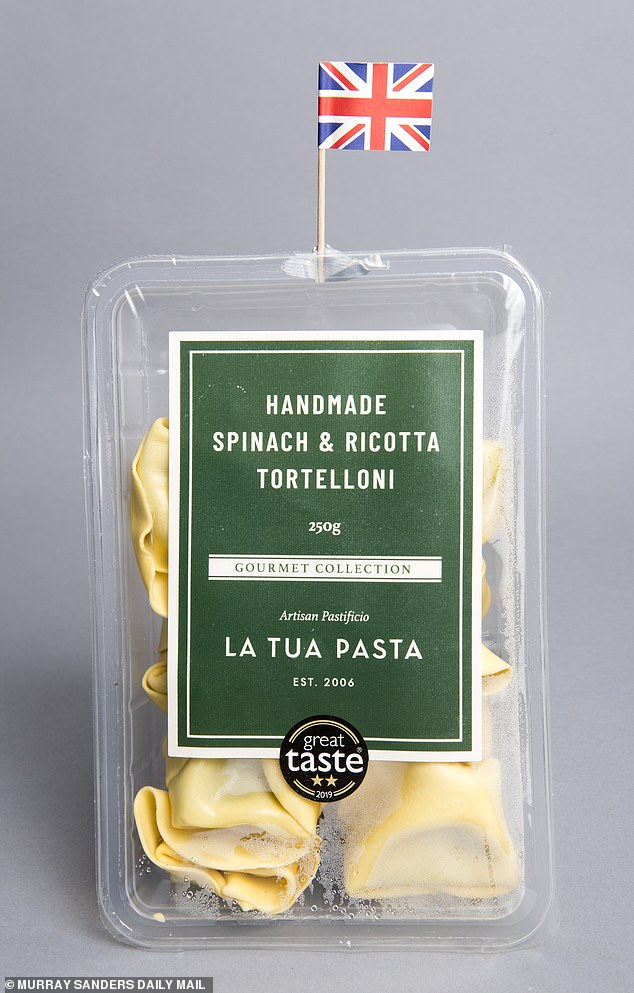 Vacherin Mont d’Or is a seasonal cheese made with fatty milk from Alpine cows. It is rich, with piney tones from the strip of spruce it’s packaged in. Winslade cheese is made in a similar way, but with milk from local cows.

English Winslade: ‘When you would go to a restaurant in the Seventies and Eighties only French cheeses were on the trolley. Maybe occasionally you would have a bit of Stilton. Now, that’s changed. This one is so creamy, it’s French, it must be. Lovely.’ 10/10 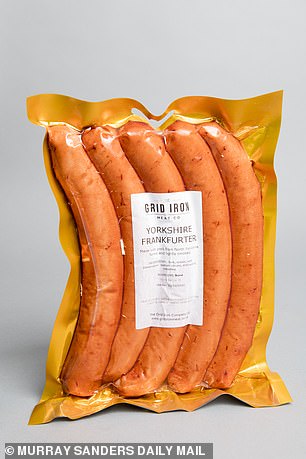 A traditional frankfurter is cured, then smoked, and typically heated in boiling water rather than grilled, to serve.

German frankfurter: ‘Nobody does it like the Germans. I used to go through Germany four times a year and my kids are crazy about frankfurters. The smell stays for about six hours! It’s a very specific wood they use, that you find when you go to Baden Baden.’ 8.5/10

British frankfurters: ‘Neither of these are right. One is pork [The Grid Iron], it is what you expect from a Frankfurter style sausage but it’s missing that smell, it doesn’t have the wood. The other sausage [F&Co] is not pork, it is gamey — but extremely salty, I can’t tell what it is.’ 6.5/10 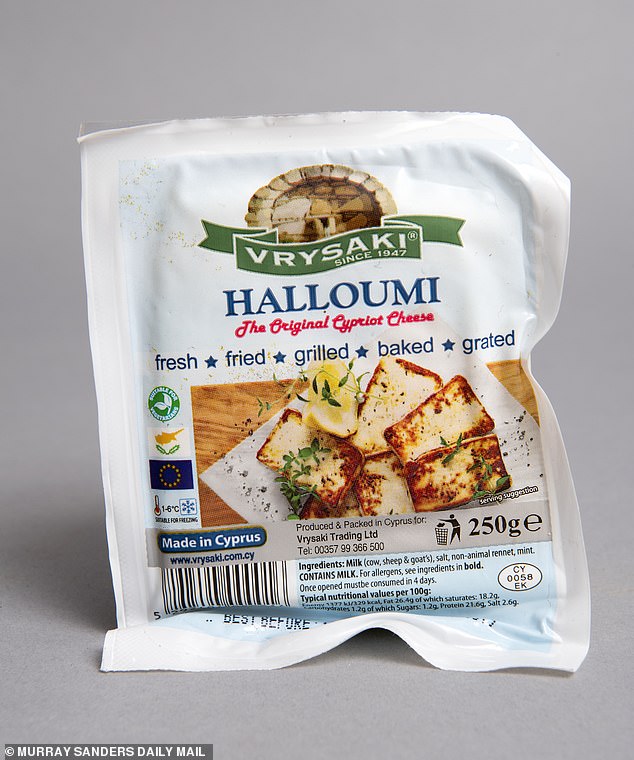 BUTTERING UP THE OPPOSITION

A good butter is made from good cream, from cows that have grazed on good pastures. Lurpak has a reputation for consistency.

Lurpak: ‘Straight away I’m going to tell you this is Lurpak! Is it? It’s fine, it’s what you expect, simple and consistent.’ 7/10

Netherend: ‘This is very yellow for an unsalted butter. Mmmm, that’s brilliant. I can identify the good strong milk, the churning, the delivery of the flavour is superb. It is a treat — I would buy this one. I believe this one is the English one.’ 9/10 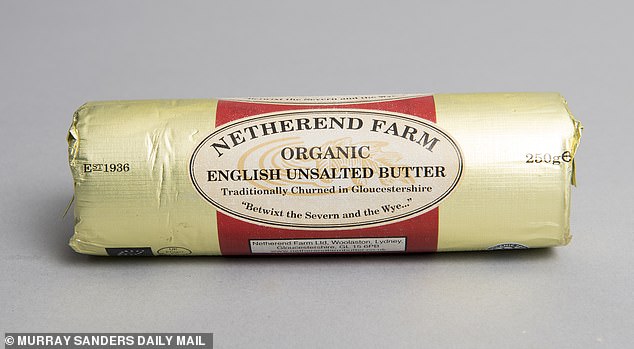 WHICH HALLOUMI SQUEAKS IT?

WHICH IS THE BRIE’S KNEES?

A good Brie (named for the region in which it originated) is made of rennet and raw milk, soft in the middle and firm at the rind, with plenty of flavour.

French Brie: ‘That’s French, I guarantee, one million per cent. This is beautifully creamy Brie de Meaux, or I will kick my own backside. It’s very good.’ 9/10

English Baron Bigod: ‘This has a fantastic aroma — superb. Now I’ve got a problem — they’re both so good it’s going to have to go to a penalty decision! But if I forget about my nostalgic smell and flavours, this is phenomenal.’ 9.5/10

Cypriot halloumi: ‘The only you thing you can do with that is grill it. It’s very salty. I’m not an expert in this type of cheese, but I have no pleasure eating this, it’s like eating rubber — is it supposed to be? This is the British.’ 6/10

English Halloumi: ‘In terms of appearance this one is better. But taste and texture, it’s worse, it’s like eating the sole of your foot. That’s terrible.’ 4/10

QUIDS IN WITH THE QUINCE

Spanish quince paste is traditionally served with manchego cheese, or eaten as a sweet. Quinces are harder to grow in the UK but England Preserves uses UK quinces for its jelly.

Spanish membrillo: ‘At first you think it’s very sweet but it’s not too sweet. There’s nothing synthetic, you can smell the quince, it’s authentic. It looks like a natural colour.’ 7.5/10

English quince jelly: ‘That’s very fruity, it’s more aromatic, it smells better and it tastes two or three times better. This recipe is there to make a mark — in which case I think this one is the English. In the flavour, the smell and what I could use it with, this one is more my cup of tea.’ 8/10

HARD CHEESE for the italians?

Pecorino (Italian for ‘of sheep’) is a hard, sharp and salty sheep’s milk cheese, often eaten sliced, or grated over pasta. 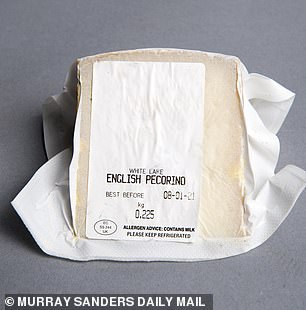 Italian pecorino: ‘This is not my type of cheese, but I think this one is rather weak in flavour. I don’t like the texture.’ 6/10

English pecorino: ‘This one is more powerful. There’s sweetness, a bit of sourness, a good texture. Wherever it’s come from it’s the winner.’ 8.5/10

WHICH FETA’S IN THE FINEST FETTLE?

Feta simply means ‘slice’ in Greek — it’s a curd cheese made of sheep and/or goat milk. A good one is soft and tangy. The description feta can only be used by versions that are made in Greece.

Greek feta: ‘This is a bit more acidic but it has more flavours. It’s the better one. Is it British?’ 8/10

‘Today, Great Britain is at the top of the table for creating some of the most refined produce, there are so many fantastic items out there — and this is only the beginning for British food.’

AND THE WINNER IS…