From the Archives, 1959: Famed Southern Cross Hotel approved in Melbourne

The City Council yesterday approved a proposal by Pan American Airways to build a £5 Million Hotel on the Eastern market site. 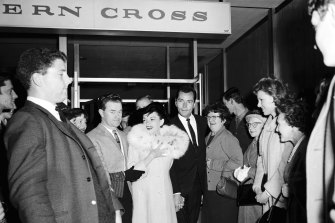 The hotel, to be named the Southern Cross, will be 18 or 19 stories high.

After the council decision the Lord Mayor (Cr. Bernard Evans) said: “This is the greatest Christmas present we could have.“

“In one year we have negotiated successfully on two sites that have been a great worry to us – the Eastern and Western markets,” Cr. Evans said.

The council agreed by 19 votes to six on five modifications to the original proposals made by P.A.A. One variation gives the controlling company a 99-year lease.

The negotiator for P.A.A. (Mr Charles Trippe) said later, “I am delighted that the council has taken this attitude. The new hotel will be a great thing for Melbourne. 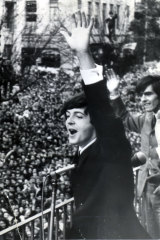 The Beatles wave to the fans from the first-floor balcony of the Southern Cross Hotel in Melbourne.Credit:Staff Photographer

“The hotel, plus air fares from overseas, should bring revenue between four and eight million dollars a year.“

A feature of the hotel plan will be a large public plaza, planted with shrubs and flowers in the centre of the block.

“The hotel will virtually be a city within itself,” he said.

Explaining that the architectural scheme was still under study, Mr Trippe said preliminary plans included 445 studio-type guest rooms and facilities for accommodating 2000 to 3000 people at conventions and balls.

Space would be available for shops and at least 300 cars would be parked below ground level.

An Australian company, Southern Cross Pty. Ltd., would own the hotel with P.A.A. subscribing about 30 per cent of the share capital.

The hotel would be operated by the Intercontinental Hotel Corporation, a wholly owned P.A.A. subsidiary, which operates 14 hotels in 11 countries. 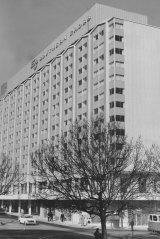 The amendments to the original agreement approved by the City Council were: –

Under the proposed beautification plan, parking meters would be removed from the centre of Exhibition Street in front of the hotel and trees planted there. Trees would also be planted on the pavement.