At Caulfield South’s North Road Medical, the phones were “ringing off the hook” all day.

Practice manager Rebecca Laver said 800 patients had called trying to book their appointment for a COVID-19 vaccination. The clinic was among the 1104 the federal government named that will start delivering AstraZeneca jabs to 6 million of the most at-risk Australians from next Monday. 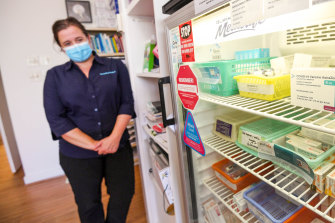 North Road Medical nurse Linda Gore, who will be giving the vaccine.Credit:Joe Armao

It was the same for other GP clinics on that list – all swamped with demand from patients keen to be vaccinated. Some clinics refused to take bookings until the doses arrived.

North Road Medical initially told callers it would delay taking bookings until next week while it waited for the vaccine to be delivered later this week, but the first 80 doses then arrived on Wednesday afternoon.

“We are now just in the process of trying to work out the best form of dispensing it,” Ms Laver said.

“We are worried about the onslaught of the next lot of phone calls.” 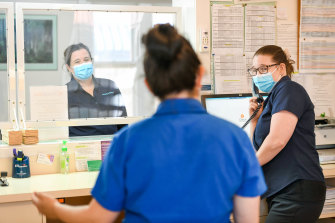 She said the clinic had further training to do this week before it activated an online booking system.

“We just need to work out the best way to give everybody the best chance, and to understand this will be a rollout process, it won’t be happening all in the first week,” Ms Laver said.

Yoel Eisenberg, a GP at Wynlorel General Practice in Malvern, said the clinic expected to receive 100 doses a week and had already booked out appointments until June.

“We have left a few days of buffer in case we are delayed,” Dr Eisenberg said. “At the moment we are hopeful we are going to get them and are just keen to get going.”

Adam Parker, a 54-year-old with type 2 diabetes, called news of the rollout a “bureaucratic fantasy”.

None of the six GP clinics he rang in Melbourne’s south-east on Wednesday morning, including North Road Medical, could book him in for a jab. Most of the clinics admitted they didn’t yet have the vaccine and didn’t know when they would be receiving it.

“[I was] disappointed, because you hear on the news that … the rollout is happening and ‘call now and make a booking’,” Mr Parker said.

“You get a sense of optimism that everything’s going to be OK and then you’re basically left with … a complete mess-up.”

Mr Parker, who got the clinics’ numbers from a list on the government’s website, said the clinics he phoned were just as confused as the public about the rollout. 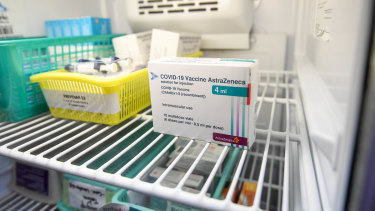 Nick Roberts, a 53-year-old diabetic, said he was unable to make a booking at Delta Medical in Shepparton.

The Age has called each clinic Mr Parker and Mr Roberts phoned and each confirmed they were not taking bookings. Some were frustrated at being inundated with calls without being informed when they would receive doses.

“Everybody just needs to understand that this is going to take a little while,” he said. “Don’t view it like a Taylor Swift concert where the tickets are gonna run out, right, there’ll be plenty of vaccine in the end, but what we don’t need is people sitting online trying to get the vaccine on day one because there is no rush. We need to do this calmly and in an orderly way.”

He said people were understandably apprehensive about the vaccine rollout because it was all so new and unlike the annual influenza vaccine, which was delivered to GPs in much larger quantities.

“There is going to be a period at the start where people are going to be stressed, particularly our receptionists.”

He said GP clinics were ideally placed to administer the shots because people had already established relationships with their doctors.

Dr John Dyson-Berry from Lime Medical Clinic in Mildura said the first shipment of 80 COVID-19 vaccinations arrived at his clinic on Wednesday morning and the phone had been running hot. Almost three-quarters of vaccination bookings for next week were already full, he said.

“While it’s a bit daunting because it is so new, from a COVID and global perspective it’s very exciting,” he said.

He said patients would be assessed for their suitability prior to receiving the shot and taken through a detailed consent process.