He runs one amateur football game per year. He makes more than $1 million

Tampa, Florida: In the rural, lake-pocked exurbs north of Tampa, there are a series of gated communities of waterfront mansions, populated by some of the region's wealthiest.

The founder of a nationwide chain of spine surgery centres lives here, not far from the chief executive of the Tampa Bay Lightning, and a few streets over from former NFL star turned broadcaster Ronde Barber.

A few doors down from Barber, there's a particularly impressive home, with a 600-bottle wine cellar, a wraparound shower with massage jets and a soaking tub, and a sizeable pool with a waterfall and jacuzzi overlooking the lake. It belongs to Jim McVay, a sports executive who has built his wealth over the past 30 years by running the Outback Bowl, a second-tier college football postseason game featuring third-place teams and sponsored by Australian-themed restaurant chain Outback Steakhouse. 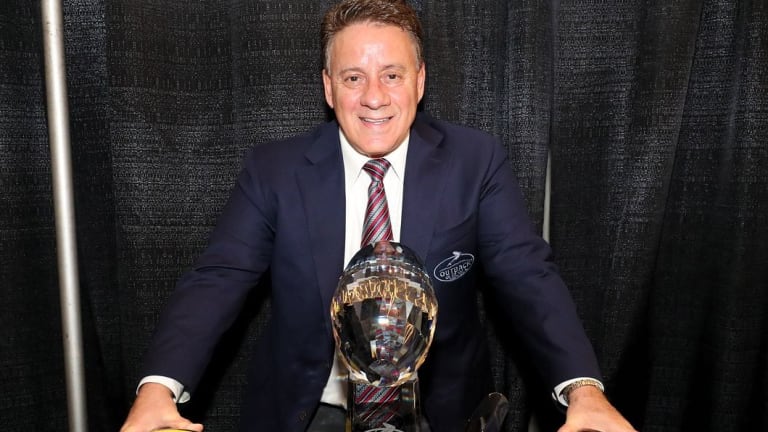 The hefty pay cheques enjoyed by bowl bosses long have been viewed by economists as a sign of exploitation in a sport played by amateurs. But even among this coterie of well-paid executives, McVay's compensation – $US1,045,000 ($1,478,000) in 2017, according to the bowl's most recent tax filing – ranks as extreme, according to a review of bowl financial records and interviews with industry experts.

McVay, a former Buccaneers marketing executive and uncle to Los Angeles Rams coach Sean McVay, is the highest-paid bowl executive in the country, even though his organisation's revenue – $US11.9 million in 2017 – ranked 10th among bowl organisations. While several bowl bosses manage other games or major events, McVay's core duties remain as focused as they were when he took the job in 1988: negotiate contracts and sell sponsorships and tickets for one football game each year.

The decision by the Outback Bowl's board – a volunteer group of local businesspeople and dignitaries – to pay McVay, year after year, more than many of his peers further stands out because their bowl, historically, is among the stingiest when it comes to giving to charity.

Among the 10 wealthiest bowl games in terms of revenue, the Outback Bowl ranks eighth in charitable giving since 2000, according to financial records and interviews, with $US500,000 donated, all in the last two years.

The Peach Bowl, meantime, has given more than $US32 million to charities in that time frame. The Fiesta Bowl has given more than $US12.5 million. And the Rose, Orange, Alamo and Citrus Bowls have all spent millions in their communities, on college scholarships for lower-income students, affordable housing, and restoring city parks in poor neighbourhoods, among other causes.

McVay, who has defended his pay in news reports as recently as last year, declined an interview request for this story, and a bowl spokesman cited a new policy that forbids Outback Bowl officials from publicly discussing compensation. A former Outback board chairman, in a phone interview, defended McVay's pay as "a bargain", pointing to his ability to keep Outback, the SEC and the Big Ten locked into contracts, and the economic impact of tens of thousands of visitors each December.

"We don't just throw money away… Jim's very well-compensated, yes, but he's worth every penny," said Steve Schember, a board member since 1990.

In a follow-up email, in response to questions about the bowl's charitable spending, Schember wrote: "We're not the United Way. While we're happy to give to local charities that's not our purpose. Come down to Tampa New Year's Eve… see the thousands of Miss St and Iowa fans at the parade who are staying at our hotels eating in our restaurants and drinking at our bars. If you come I'll buy you a beer!"

When informed of McVay's pay and the Outback Bowl's revenue, one expert on the economy of college sports laughed.

"You really can't justify this salary," said Richard Southall, professor and director of the College Sport Research Institute at the University of South Carolina. Southall said McVay benefits from working in a niche industry with unique market factors beneficial to executives, such as cheap entertainment (the players in bowl games each get $US550 of souvenir gifts, the maximum permitted under NCAA rules), and lax oversight.

Outback Steakhouse to the rescue

Football has always figured prominently in McVay's life. A native of Lancaster, Ohio, he is the son of John McVay, the former San Francisco 49ers executive who helped build the rosters of five Super Bowl winning teams in the 1980s and 90s. 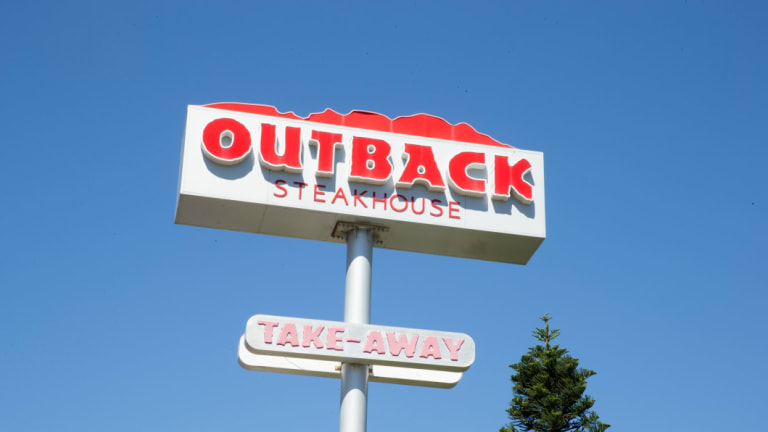 McVay went to college at the University of Dayton, where he was a backup quarterback and graduated in 1976 with a bachelor's in mass communications. After a few years as a sales director for the Cincinnati Stingers of the World Hockey Association, McVay moved to Tampa for a job as marketing director for the Tampa Bay Bandits of the United States Football League.

In 1987, he took a similar job with the Tampa Bay Buccaneers, where he came up with idea to fire off a cannon in the stadium after scores by the home team, a tradition that continues today. After 10 months with the Bucs, McVay quit to become chief executive of the game then known as the Hall of Fame Bowl.

When McVay took over, he has said in interviews, the game was deeply in debt, and though he was able to stabilise the finances, a few years later there was another ominous development. In 1992, Outback Steakhouse – one of the few large corporations headquartered in Tampa – signed a sponsorship agreement with the Gator Bowl, played in Jacksonville.

In a seven-month period in 1994 and 1995, however, McVay executed a series of deals that his supporters credit as master strokes.

First, he improved the quality of the game, locking in the Big Ten and SEC for their third-place teams (previously, the game had pitted fourth-place teams from the Big Ten and ACC). Then, McVay negotiated a contract with ESPN that secured prime broadcast real estate on New Year's Day.

And finally, McVay lured Outback away from the Gator Bowl by agreeing to a then-novel concession: The game would be re-named the Outback Bowl – not the Outback Hall of Fame Bowl – preventing media outlets from dropping the sponsor's name when discussing the game.

By 1998 – the oldest year for which records are available – McVay was earning the equivalent of $US300,000 in today's dollars, adjusted for inflation. The Outback Bowl generated $US7.8 million that year, most of which was split up and paid out to the competing teams.

In the ensuing 20 years, as the bowl's income increased about 50 per cent, McVay's compensation jumped about 240 per cent.

In defending McVay's soaring pay, former board chair Schember cited his negotiating prowess. While other bowls hire consultants to hammer out major contracts, McVay handles all negotiations with ESPN, Outback, the Big Ten and SEC himself, saving the bowl hundreds of thousands of dollars in fees.

Those contracts are up for negotiation just every four or six years, however, raising questions about McVay's major duties in the intervening years.

"It's not a situation where he sits on his thumbs for three years," Schember said. "He goes up to Chicago a lot [Big Ten headquarters]… he goes up the SEC offices… it's an important job, maintaining those relationships."

Another main reason the Outback board has more than tripled McVay's pay over the last 20 years, according to Schember, is because McVay routinely tells them NFL teams are trying to pry him out of the bowl world.

"At least every other year… he'll come to a board meeting and say an NFL team has contacted me, and they've got a job in their front office, and they want to know if I'm interested… part of the reason he is so well-compensated is so he isn't tempted to leave," Schember said.

Schember declined to disclose which NFL teams have expressed interest in hiring McVay, who hasn't worked in professional football since 1987. Outback Bowl spokesman Mike Schulze, in an interview, said he believed his boss "really ought to be a GM [general manager] of an NFL team… or something higher than that." Schulze declined, however, to answer questions about the job offers McVay has told the Outback board he's received over the years.

A spokesman for the Los Angeles Rams declined to pass along a question to Sean McVay about knowledge he has of the NFL offers his uncle has turned down.

'He runs the whole show'

McVay is one of only five full-time employees of the Outback Bowl, and Schember, his former board boss, cited that figure when defending McVay's pay.

"He runs the whole show with a very small staff. Our employee expenses are a fraction of what the other bowls are," he said.

While it is true that the Outback Bowl has a relatively small number of employees compared to other major bowls, its payroll is actually in middle of the pack, proportionally: The bowl spends 16 per cent of its revenue on employees, fifth among the 10 wealthiest bowls. In Tampa, a city where median income is $US48,000, the lowest-paid Outback Bowl employee earned $US138,000 last year.

Economist Andy Schwarz, an outspoken critic of NCAA amateurism rules, has observed this phenomenon in major college athletic departments as well. As more money from television contracts, sponsorships and donors have flowed in over the past two decades – with the compensation for college athletes capped at the value of a full scholarship – athletic directors have gone on hiring sprees, and doled out sizeable raises.

"The dynamic is basically the same," Schwarz said. "These bowls generate a tonne of revenue, and some of it is unclaimed, and it has to go somewhere."

In an interview at Outback Bowl headquarters earlier this month, bowl spokesman Schulze – who also serves as director of sponsorships, and earned $US205,000 in 2017 – said it's a common misconception that he and his colleagues are busy only one month per year. There are about 25 promotional events throughout the year, Schulze said, and selling sponsorships for the game is also a year-round endeavour.

"People don't understand the bowl world. It's very unique," Schulze said. "People are always going to say, 'Gosh, I didn't even know that was a job'. But we all work hard. We're here every single day."