Health Minister Brad Hazzard is urging the public to keep the rising number of Omicron variant cases in perspective, following a Regents Park student becoming the ninth case in NSW.

The student attends the Regents Park Christian School in western Sydney, and health authorities are concerned that the COVID-19 variant may have been locally acquired and two fellow students also infected. 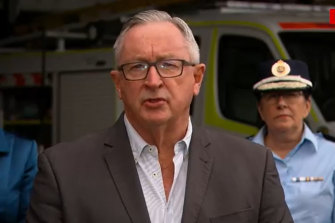 Mr Hazzard said other students in the same cohort were also undergoing testing, while further test results are expected late on Friday afternoon.

The minister urged the community to maintain “perspective” over the latest cases.

“I think transmission is always a concern, but we also need to just keep it in perspective at the moment, that worldwide there’s not clarity around whether or not this particular variant is going to cause us anywhere near the problems that the earlier variants caused,” he said.

“We’re not seeing people suddenly being rushed to hospital. What we’re seeing is people who are either asymptomatic or have very mild symptoms, generally”.

Mr Hazzard said the confirmed student case was concerning because it was the first case in the state that did not have any travel history.

“It would appear that the case could well be a [transmission] on NSW soil,” he said.

The western Sydney student is the fourth of NSW’s nine Omicron cases who were in the community before testing positive.

Premier Dominic Perrottet said NSW would continue to take a balanced approach to the pandemic.

Mr Perrottet said he always expected case numbers to be higher once the state started opening up. However, he said the government remained committed to further easing of restrictions under the road map on December 15.

“I think what is most important is that [we] focus more, as the health minister has said, on hospitalisations and ICU presentations. They are the numbers that matter. Case numbers in of themselves are only one measurement,” he said.

A passenger travelling on Sunday’s Singapore Airlines flight SQ231, who had recently been in southern Africa, became the state’s eighth case on Thursday. Anyone who was on either flight is considered a close contact and must get a PCR test and self-isolate while waiting for further health advice.

A child who has been living in Chatswood for the past week has also been confirmed as a case of the Omicron variant. NSW Health said it was “concerned” transmission of the variant may have occurred on board flight QR908 from Doha on Tuesday, November 23, as the child, whose parents are also COVID-positive, had not spent time in southern Africa.

Under new rules introduced by the federal government over the weekend, people arriving in Australia who have been in South Africa, Lesotho, Botswana, Zimbabwe, Mozambique, Namibia, Eswatini or Malawi in the previous fortnight must enter hotel quarantine for 14 days.

NSW Health Pathology continues to genomically sequence thousands of recent positive swabs collected in the state, in an attempt to ensure no cases of the variant have been missed.

There are 140 coronavirus patients in hospital with the virus. Of those, 25 are in intensive care.

Across NSW, 92.6 per cent of NSW residents aged 16 and up are fully vaccinated against COVID-19.