A heterosexual couple have taken their civil partnership fight to the Supreme Court, saying they want a legal union which does not carry any ‘patriarchal baggage’.

Rebecca Steinfeld, 37, and Charles Keidan, 41, want a legal union through that route but are prevented because the Civil Partnership Act 2004 says only same-sex couples are eligible.

The academics, who live in Hammersmith, west London, suffered defeat at the Court of Appeal in February last year, but were given the go-ahead in August for a Supreme Court hearing.

The couple have demanded the Government to ‘stop making excuses’ and make civil partnership available for everyone. 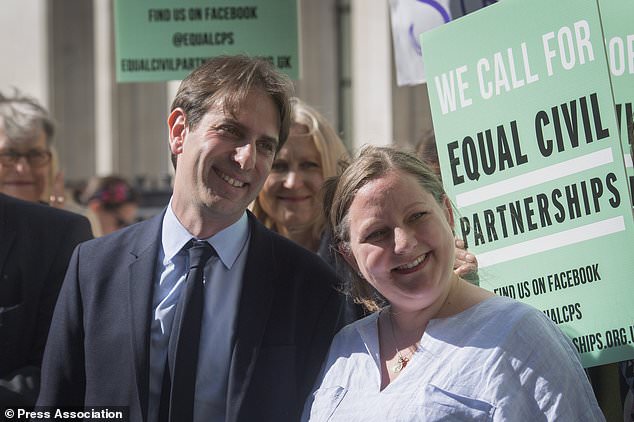 Rebecca Steinfeld, 37, and Charles Keidan, 41, (pictured today) want a legal union through that route but are prevented because the Civil Partnership Act 2004 says only same-sex couples are eligible

A panel of five Supreme Court justices, including the court’s president Lady Hale, began considering the couple’s appeal on Monday.

Ms Steinfeld and Mr Keidan, who have two daughters aged two and eight months, claim the Government’s position is ‘incompatible with equality law’.

In a statement outside court ahead of the hearing, Ms Steinfeld and Mr Keidan said: ‘Throughout our campaign we have met hundreds of couples like us who love each other and want a civil partnership so they can celebrate their commitment and strengthen the security of their family unit.

‘Their reasons for not wanting to marry vary from bad personal experiences to expense to conscience – but that doesn’t matter.

‘All they want is the choice of marriage or a civil partnership to suit them, which is currently available only to same-sex couples.

‘We have a new Equalities Minister and she should take this opportunity to look afresh at the Government’s position.

‘It’s time for the Government to stop making excuses which play with people’s lives, and give choice to all now.’ 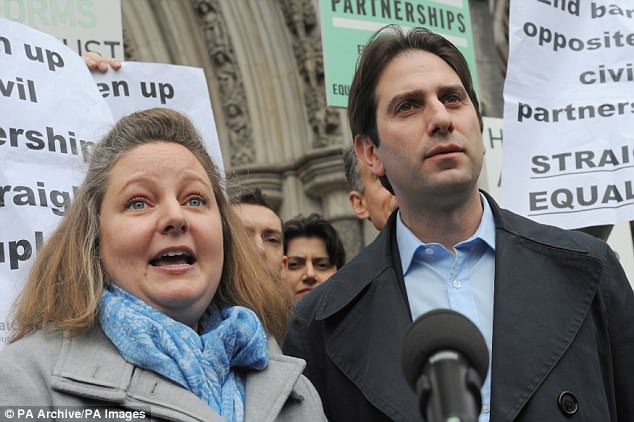 Rebecca Steinfeld and Charles Keidan, a couple with two young children, are fighting for the right to enter a civil partnership instead of getting married 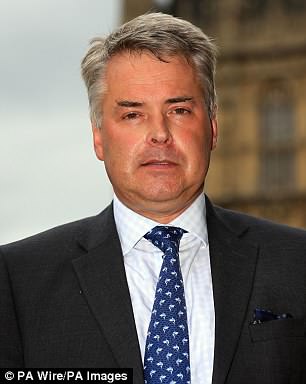 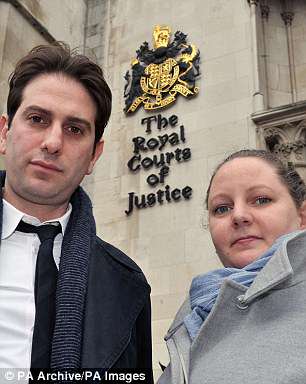 Steinfeld and Keidan (right) said they favour the union over marriage. Tim Loughton (left), the MP who looked to extend civil partnerships to heterosexuals, said: ‘There is absolutely no excuse why the government is not getting on with it and equalising civil partnerships’

The Court of Appeal agreed the couple had established a potential violation of Article 14 of the European Convention on Human Rights, which relates to discrimination, taken with Article 8, which refers to respect for private and family life.

But, by a majority of two to one, the judges said the interference was justified by the Government’s policy of ‘wait and evaluate’. 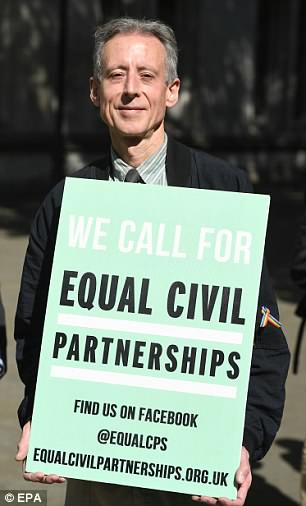 Human right campaigner, Peter Tatchell shows his support for the couple’s cause

They heard the couple have deep-rooted and genuine ideological objections to marriage and wish to enter into a legally regulated relationship which does not carry ‘patriarchal baggage’.

The Government said it was decided, after public consultations and debate in Parliament, not to extend civil partnerships to opposite-sex couples, abolish them or phase them out at that stage.

The aim was to see how extending marriage to same-sex couples impacted on civil partnerships before making a final decision which, if reversed in a few years’ time, would be disruptive, unnecessary and extremely expensive.

The couple are expected to make a direct appeal to the Government to support the extension of civil partnerships to all.

‘The ban on opposite-sex civil partnerships is discrimination and a violation of human rights.

‘It is outrageous that the Government is unwilling to legislate equality and that this couple are forced to go to court to get a basic human right – the right to be treated equally in law.

‘It cannot be fair that same-sex couples now have two options, civil partnerships and civil marriages, whereas opposite-sex partners have only one option, marriage.’

The hearing is expected to last two days.