History has its eyes on you, Melbourne

The best news this week was that the musical Hamilton is coming to Melbourne next year. (The Age had the scoop on that, by the way).

I am not a huge musical fan, but there’s something so splendid about Hamilton, so smart and glorious and improbable – a rappy musical about one of the leaders of the American Revolution and the first US secretary of the treasury, for goodness’ sake, who was possibly not quite the hip paragon of enlightened democracy as the show portrays him. 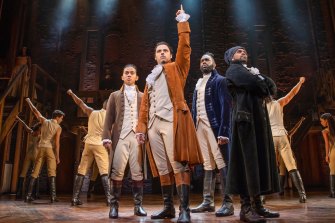 Hamilton will call Melbourne’s Her Majesty’s Theatre home from as early as March next year. Credit:Daniel Boud

Over the years, musicals have become formulaic – all Phantom of the Opera fizz – but this one is nerdy and ambitious. The cultural impact of Lin Manuel Miranda’s creation is matched only by Andrew Lloyd Webber’s 1970s rock opera, Jesus Christ Superstar.

I travelled up to Sydney a few weeks ago to see it, meeting my brother who flew from Brisbane. I know this is parochial, but I couldn’t help feeling it was a pity that Sydney rather than Melbourne had won the rights to the show after the personal intervention by NSW Premier Gladys Berejiklian, who offered superior financial support.

With Melbourne in the doldrums, what a fillip it would have been to our hotels and restaurants, to our local tourism operators, as well as to locals who could see such a soaring show without having to wear a mask. The Lyric Theatre in Sydney was a serviceable venue, and the show was great, but to have Hamilton produced in the superior Her Majesty’s Theatre from March next year will do it justice.

We can’t have a Hamilton-led recovery, of course. Melbourne’s CBD was devastated by the harsh lockdown last year, and is far from being back to “normal”, even if foot traffic around the city is slowly improving. The interesting discussion is about how the city can be reinvented now the era of masses of people coming to the CBD five days a week seems to be over.

There are lots of ideas to coax people back. The federal government’s half-priced airfares skipped Tullamarine and have done nothing to help Melbourne, the most seriously impacted city in the country. There are voucher schemes – the state government’s $200 offering to help offset the cost of accommodation for visitors to Melbourne sold out within minutes.

The City of Melbourne’s FOMO Fridays will run until June 4, offering giveaways like free cocktails, doughnuts and movie tickets to encourage office workers to hang around in the city.

All these little things are appealing, but what comes next? We are unlikely to have international students in large numbers for years. What if more people came to live in the city? Or perhaps we become a CBD for socialising, rather than mostly for work?

The fears of city business owners flared this week when it became known that a second safe injecting room would be located at the former Yooralla building at 244-248 Flinders Street, near Flinders Street Station and the popular Degraves Street. As a public health measure, this makes sense – about a quarter of overdoses in the CBD take place within 250 metres of the intersection of Flinders and Elizabeth streets.

The Age supports the principle of medically supervised safe injecting rooms because they save lives, but there have been problems at the North Richmond venue, nestled between a primary school and a public housing estate. In March, a man’s body was found near the grounds of the school and another man allegedly entered the site with a knife.

We reported this week that planners for the second site had learned from the Richmond experience and that the CBD facility would be more discreet, offering drug and alcohol services, allied health services for the broader community and homelessness outreach programs.

That sounds smart, but I do feel for nearby traders, who have suffered through COVID and will now worry about further disruptions to their businesses.

The debate highlighted the complexity of a big city. The needs of people are different. There will always be disagreements and competing pressures, and our challenge is to forge some common purpose for our city to flourish again. It will not look the same as pre-COVID, but it’s up to us what Melbourne could look like in the future. It’s not the American Revolution, of course, but history has its eyes on us.