Homeowner, 63, is ‘unable to get in his house’ as builders dump 8ft-high pile of ‘stinking’ rubbish outside his front door – from a neighbouring property

A fed-up homeowner claims an 8ft high pile of ‘stinking’ rubbish next to his front door is so dangerous it is preventing him from entering his own home.

Charity worker Paul Stephenson, 63, says he has had to clear a safe passage to his £160,000 two-bedroom terraced house in Harbone, Birmingham, because of the pile of beds, bricks, plaster and furniture stacking up next door.

He said the debris has come from major refurbishment work taking place at an empty, neighbouring property and has been piling up for over a month. 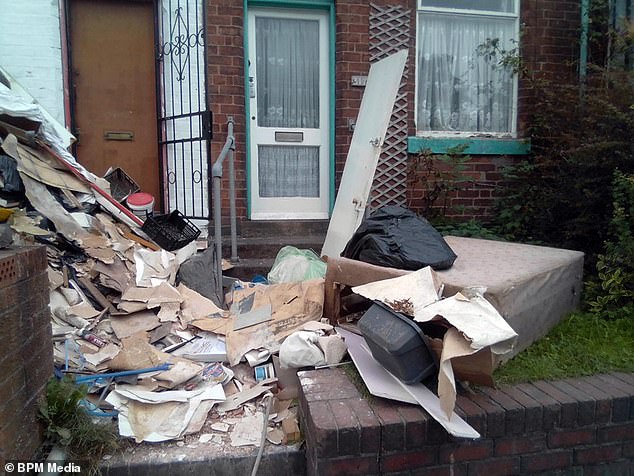 Paul Stephenson says he an 8ft high pile of ‘stinking’ rubbish outside his front door, in Harbone, Birmingham, is so dangerous it is preventing him from entering his home

Paul claimed workmen have been flinging items onto the ground floor below while gutting the interior of the house next door to his.

As well as gathering at the side of his home, the rubbish is scattered on the pavement along his street.

Paul said: ‘Thursday was the final straw. It just cascaded down. I actually had to move items to get into my own house.

‘I had to move a heavy door, bed and other stuff. Thankfully, I’m able bodied. If I wasn’t, I’d be in big trouble.

‘It stinks as well and there’s the constant problem of walking it through the house.’

Paul, who has lived in the house all his life, has complained to Birmingham City Council over fly-tipping and potential vermin problems.

A spokesman for the city council confirmed the incident is ‘currently under investigation’.

Paul has also contacted the fire service over concerns the pile could become a ‘public hazard’, but was told nothing could be done as the pile is on private property. 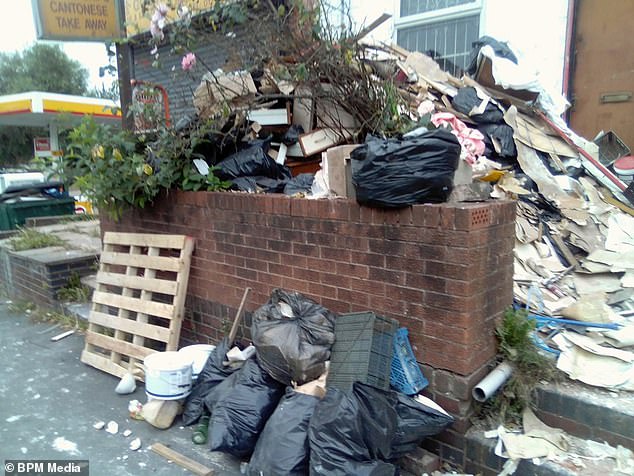 The huge pile of rubbish, which includes beds, bricks, plaster and furniture, has been piling up for a month while major refurbishment takes place in a neighbouring property

He added: ‘That’s one of my big fears. Late at night, you get people sitting on the wall and smoking cigarettes. I worry the whole lot could go up.

‘It’s a public hazard. It’s a godsend the rain has dampened it down.

‘There’s no skip. The workmen come and go at odd hours.

‘I find it totally disrespectful and the problem is I can’t find anyone who can do something about it. The stuff on the pavement is a safety issue.

‘The fire service say they can’t do anything because it’s a private property. It’s nonsensical.

‘The irony is I’ve spent years taking part in voluntary litter-picks and I’ve got this on my doorstep.’

A Birmingham City Council spokesperson today told the MailOnline: ‘This matter is currently under investigation in an attempt to resolve the issues as soon as possible.’