HONG KONG (Reuters) – Hong Kong’s airport resumed operations on Wednesday, rescheduling hundreds of flights that had been disrupted over the past two days as protesters clashed with riot police in a deepening crisis in the Chinese-controlled city. 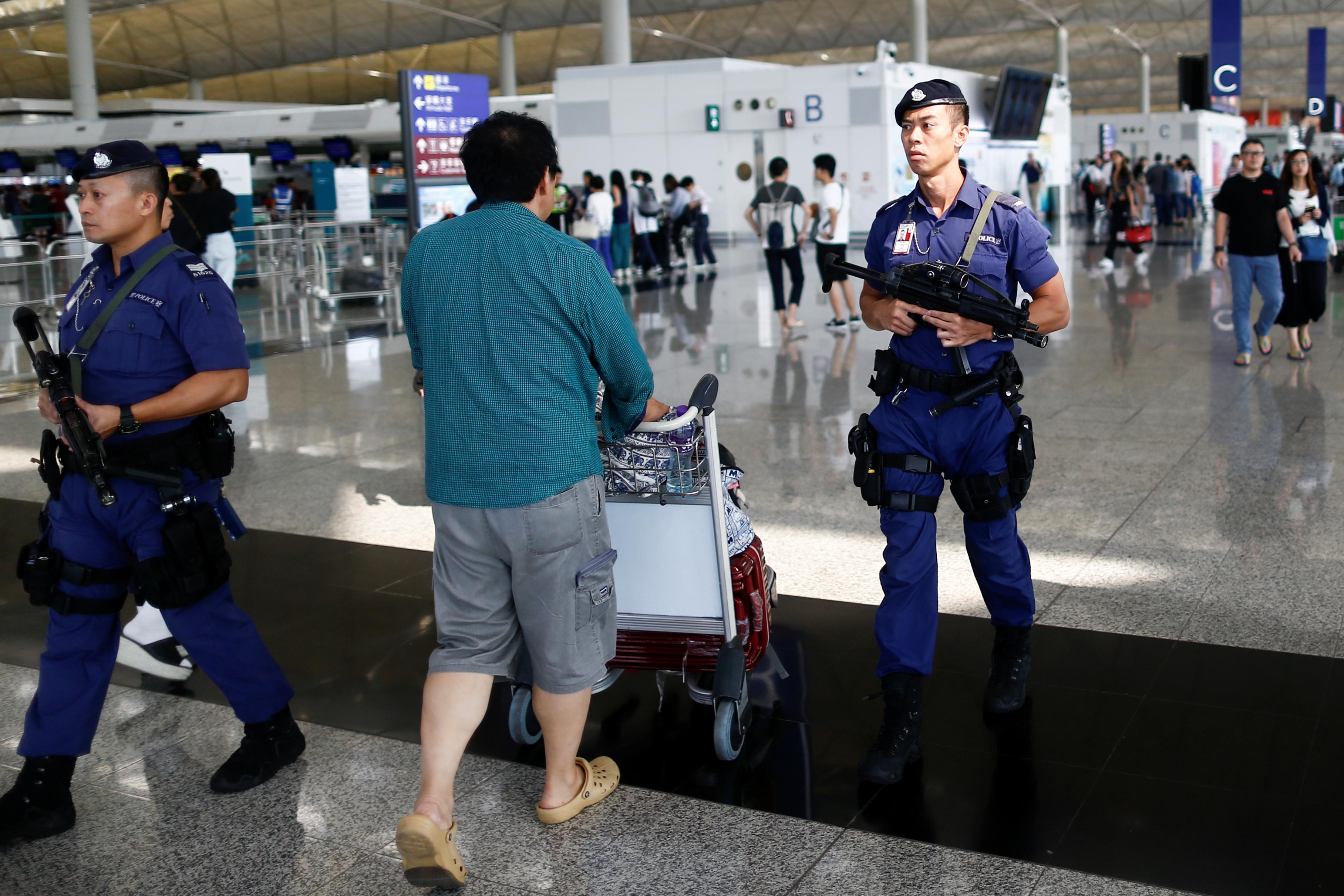 Ten weeks of increasingly violent clashes between police and pro-democracy protesters, angered by a perceived erosion of freedoms, have plunged the Asian financial hub into its worst crisis since it reverted from British to Chinese rule in 1997.

About 30 protesters remained at the airport early on Wednesday while workers scrubbed it clean of blood and debris from overnight. Check-in counters reopened to queues of hundreds of weary travelers who had waited overnight for their flights.

Police condemned violent acts by protesters overnight and said on Wednesday a large group had “harassed and assaulted a visitor and a journalist”. Some protesters said they believed one of those men was an undercover Chinese agent and that another was a reporter from China’s Global Times newspaper.

Five people were detained in the latest disturbances, police said, bringing the number of those arrested since the protests began in June to more than 600.

In Washington, U.S. President Donald Trump said the Chinese government was moving troops to the border with Hong Kong and urged calm.

Trump described events in Hong Kong as tricky but hoped it would work out for everybody, including China, and “for liberty” without anyone getting hurt or killed.

The Hang Seng stock index fell to a seven-month low on Tuesday and embattled Hong Kong leader Carrie Lam said the city had been pushed into a state of “panic and chaos”.

China condemned some protesters for using dangerous tools to attack police, saying the clashes showed “sprouts of terrorism”. The protests represent one of the biggest challenges for Chinese President Xi Jinping since he came to power in 2012.

In another potentially ominous warning, China’s official People’s Daily said in a front-page commentary on Wednesday that using the “sword of the law to stop violence and restore order is overwhelmingly the most important and urgent task for Hong Kong”.

Demonstrators say they are fighting the erosion of the “one country, two systems” arrangement that enshrined some autonomy for Hong Kong when it returned to China in 1997.

The protests began in opposition to a now-suspended bill that would have allowed the extradition of suspects for trial in mainland China but have swelled into wider calls for democracy.

Hong Kong’s Airport Authority said on Wednesday it had obtained an interim injunction to stop people from obstructing airport operations. It said protesters could only demonstrate in designated areas.

Flag carrier Cathay Pacific Airways published a half-page advertisement in the Hong Kong Economic Journal on Wednesday pledging its support for the government and calling for the resumption of the rule of law and social order.

“Rule of law is the cornerstone of prosperity and for people to live and work in peace. We have to act now to oppose violence, to resume the peace, and to maintain the prosperity and stability of Hong Kong,” it said.

Swire Pacific also said in an advertisement in the same paper that, as Cathay’s largest shareholder, it supported the carrier’s “zero tolerance on illegal activity”.

Some tourists stopped to look at posters put up by protesters in the airport’s arrival hall.

“To do a protest you have to get people’s attention. Protests at the airport can let the whole world know what is happening in Hong Kong,” said Canadian tourist Jason Grafstrom.

Check-in operations at the airport were suspended late on Tuesday afternoon, a day after an unprecedented shutdown. Thousands of peaceful protesters had swarmed the arrivals and departures halls earlier on Tuesday, chanting, singing and waving banners.

Some protesters used luggage trolleys to blockade the doors to customs checkpoints. Protesters scuffled with police and several police vehicles were blocked amid heated scenes later on Tuesday night, according to Reuters witnesses.

A policeman was seen drawing his gun at one point.

China responded by saying her comments sent the wrong signal to what it described as violent criminal offenders. 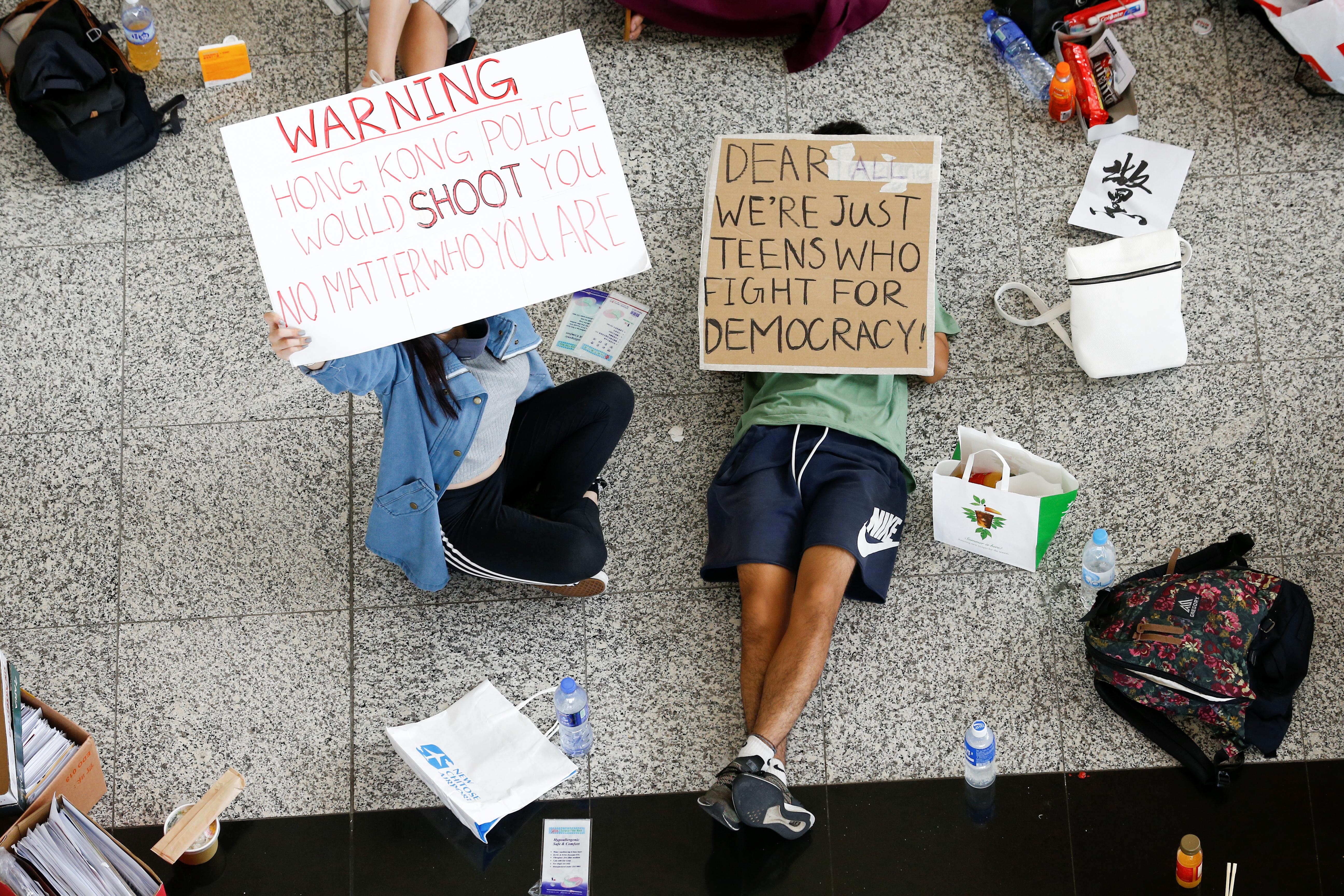 Forward Keys, a flight data company, said the recent wave of pro-democracy protests in Hong Kong had deterred people from making plans to visit the city.

“The situation in Hong Kong has deteriorated substantially in the past eight weeks, and particularly so in the past four weeks,” said spokesman David Tarsh.

Long-haul bookings to Hong Kong between June 16 and Aug. 9 were down 4.7 percent from the same period last year, he said.