HONG KONG (Reuters) – Flights leaving Hong Kong were disrupted for a second day on Tuesday, plunging the former British colony deeper into turmoil as its stockmarket fell to a seven-month low, and its leader said it had been pushed into a state of “panic and chaos”.

Ten weeks of increasingly violent protests have roiled the Asian financial hub as thousands chafe at a perceived erosion of freedoms and autonomy under Chinese rule.

The protests, which China this week likened to terrorism, present President Xi Jinping with one of his biggest challenges since he came to power in 2012.

Check-in operations were suspended at 4.30 p.m. on Tuesday, a day after an unprecedented airport shutdown, as thousands of black-clad protesters jammed the terminal, chanting, singing and waving banners.

“Take a minute to look at our city, our home,” Chief Executive Carrie Lam said, her voice cracking, at a news conference in the government headquarters complex, which is fortified behind 6-foot (1.8m) -high water-filled barricades.

“Can we bear to push it into the abyss and see it smashed to pieces?”

The protests began as opposition to a now-suspended bill that would have allowed suspects’ extradition to mainland China, but have swelled into wider calls for democracy.

“Sorry for the inconvenience, we are fighting for the future of our home,” read one protest banner at the airport.

Demonstrators say they are fighting the erosion of the “one country, two systems” arrangement that enshrined some autonomy for Hong Kong since China took it back from Britain in 1997.

They want Lam to resign. She said she would stay.

“My responsibility goes beyond this particular range of protest,” she said, adding that violence had pushed the territory into a state of “panic and chaos”.

“I, as the chief executive, will be responsible to rebuild the Hong Kong economy, to engage as widely as possible, listen as attentively as possible to my people’s grievances and try to help Hong Kong to move on.”

As she spoke, the benchmark Hang Seng index .HSI hit a seven-month low. It shed more than 2%, dragging down markets across Asia.

Lam did not respond to repeated requests to clarify if she had the power to withdraw the extradition bill and satisfy a key demand made by the protesters, or if she needed Beijing’s approval. 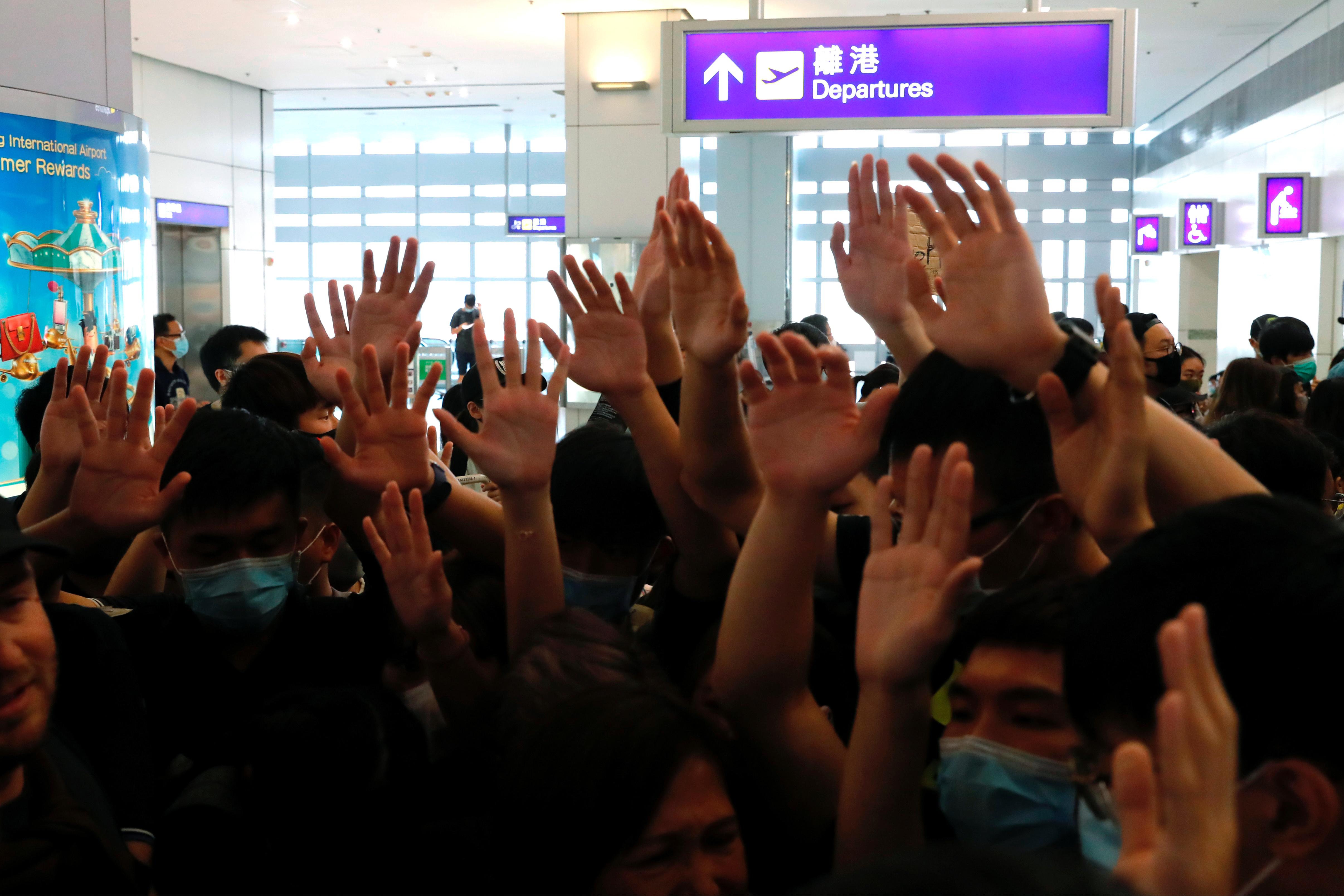 “Terminal operations at Hong Kong International Airport have been seriously disrupted as a result of the public assembly at the airport,” the airport authority said.

Some passengers challenged protesters over the delays as tempers began to fray, while the demonstrators, using a Chinese term of encouragement, chanted, “Hong Kong people – add oil!”

The airline, whose British heritage makes it a symbol of Hong Kong’s colonial past, is also in a political bind.

China’s civil aviation regulator demanded it suspend staff who joined or backed the protests from flights in its airspace, pushing the airline’s shares past Monday’s 10-year low.

Other Chinese airlines have offered passengers wanting to avoid Hong Kong a free switch to nearby destinations, such as Guangzhou, Macau, Shenzhen or Zhuhai, with the disruption sending shares in Shenzhen Airport Co Ltd (000089.SZ) surging. 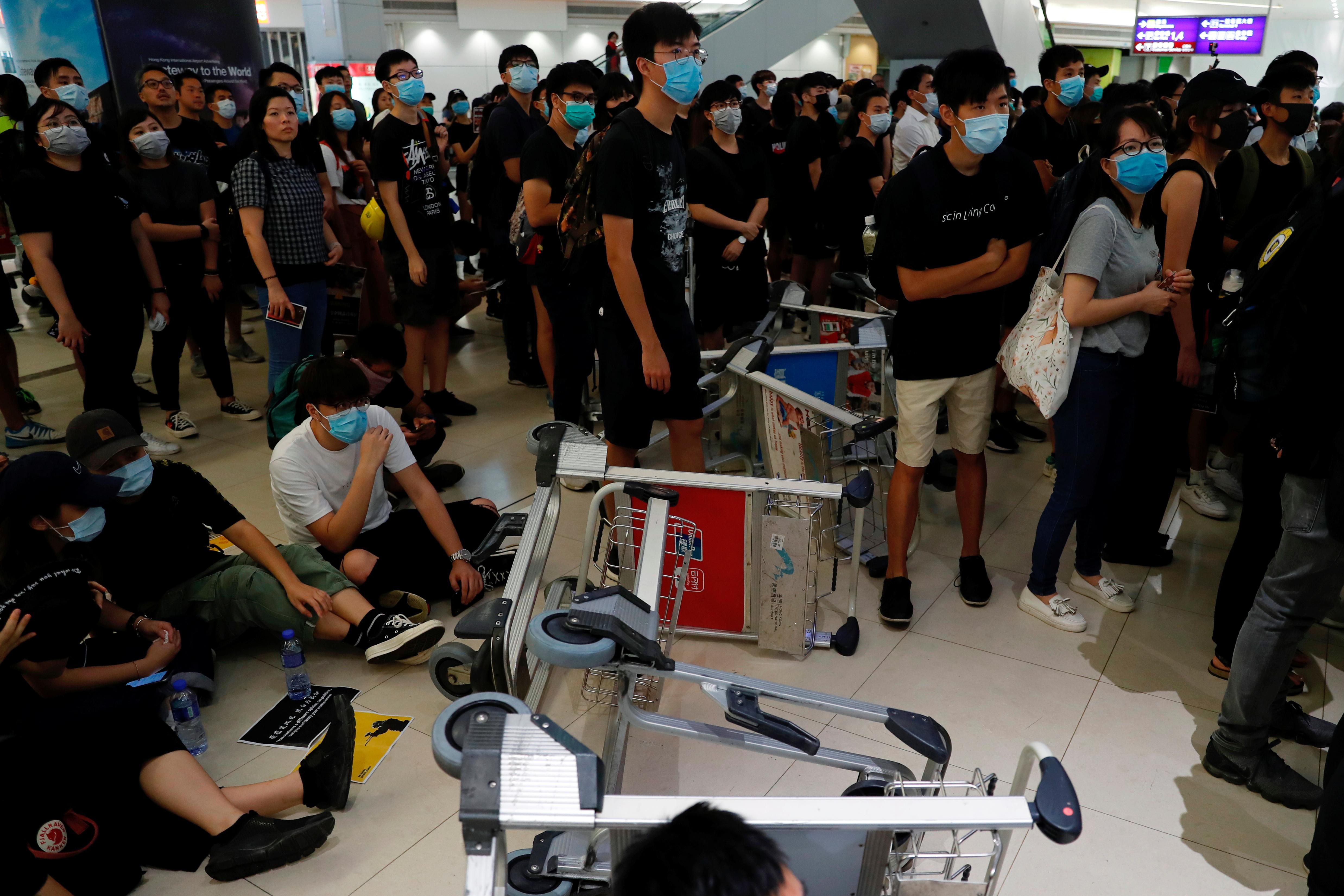 On Monday China said the protests had reached a critical juncture, after a weekend of street clashes in which both police and protesters appeared to toughen their resolve.

Police fired tear gas at the blackshirted crowds in districts on Hong Kong island, Kowloon and the New Territories.

A senior Chinese official said “sprouts of terrorism” were emerging in Hong Kong, given instances of violent attacks against police officers.

Hong Kong legal experts say Beijing might be paving the way to use anti-terror laws to restrain the protesters.