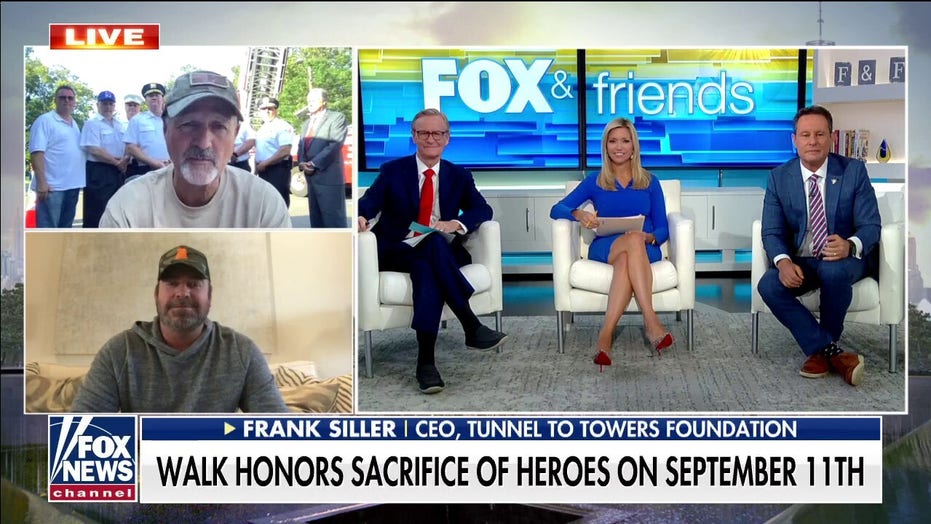 Frank Siller, CEO of Tunnel to Towers Foundation, and country music singer Lee Brice discuss plans to honor the heroes who sacrificed their lives on 9/11

A group of retired firefighters who responded to the World Trade Center during 9/11 will unveil a refurbished truck that they plan to use as a memorial to fallen firefighters, police officers and other first responders.

The firefighters who survived 9/11 have struggled in the years since, and the retiree group – many of whom are 9/11 survivors and rescuers who spent time on the pile at the twin towers – wanted to come up with a way to pay their respects.

“I know a few people who have older, antique firetrucks, and I mentioned that I was interested in getting one,” said Paul Iannizzotto, who lives in South Florida and serves as the vice president of the FDNY Retirees Broward Division.

“They said, ‘Y’know, it would be great to use one of these older rigs as a case-on or a memorial truck that we can take to these things,” he told Fox News.

The group initially acquired the truck in 2019, when a member from a sister organization in Naples, Florida turned over a truck someone offered them. The 1974 Mack CF 600 pumper would undergo a slow transformation over the following two years to become a memorial truck.

The initial goal was to add – in gold leaf – the names of all 343 firefighters who perished on Sept. 11, giving the truck its symbolic label as Engine 343.

“We started going around to get estimates to do some of the repairs, such the rust – there was a lot of rust on it – so getting some of that done, and seeing what the costs would be to get this transformed,” Iannizzotto explained.

The group got a big helping hand when the Mack dealership in Fort Lauderdale offered to assist in refurbishment, partially out of enthusiasm to see such a classic model still in operation. The dealership made sure the truck would be able to run well.

“They were very generous in donating their manpower hours,” Iannizzotto said.

The pandemic slowed down the group’s ability to fundraise for further repairs and changes to make the truck a memorial. With a lack of funds, the group struggled to address some of the bigger goals, such as repainting the truck.

The group reprioritized the project: The original gold leaf names had started to fade, so the group wanted to make them readable again, but it would have meant dealing with the same issue in another year or two and more costs. A member offered the group a better alternative.

“One of our members, Sol Moglen, runs the Brooklyn Wall of Remembrance at Coney Island Cyclone Park, and that’s a beautiful memorial,” Iannizzotto said. “That wall has all 343 firefighters, but also an additional 70-odd names of all the NYPD, Port Authority police officers, three court officers, two FBI agents and others … He allowed us to copy that, and we were able to get a company who was able to create a raft that we hang over the existing ladders of the engine.”

“Those panels now show and truly honor all those lost from the first responder and law enforcement community on 9/11.”

The Broward retirees plan to drive the memorial truck around to a number of memorial events on Saturday, to place flowers at locations that have memorials and to allow people a place and time to remember what happened.

In the incoming years the group will try to add more pieces that will allow them to honor the more than 250 additional first responders and law enforcement officers who have died since that day as a result of 9/11-related illnesses.

Iannizzotto himself suffers from such injuries: After 22 years of service, he was retired in 2012 due to World Trade Center-related issues, including problems with his lungs, his sinuses and his digestive track.

He served as a member of Engine 55 in Little Italy. On Sept. 11, 2001 he arrived on the scene before the second plane hit the South Tower, and he was in the North Tower as the South Tower collapsed.

“I was able to find and lead a group of people out of the North Tower to a little space where we operated from, and we were able to get them far enough away before the North Tower collapsed,” Iannizzotto recounted. “We were at the command post in front of the Winter Garden. We were tasked with getting into the World Trade Center command post so we could have some communication with the central command post, and that’s when the tower collapsed.”

Iannizzotto said it was “a long day at the office, and we would do it all again.”

“The one thing I try to convey, and that we advocate for, is that we never forget.”