How I Confronted Imposter Syndrome and Ran For Office 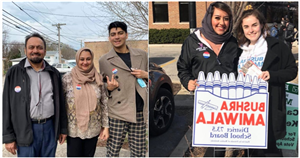 Bushra Amiwala made history as the youngest Muslim elected official in the United States.

In 2017, I was a college freshman who made history as one of the “firsts” to run for public office in my hometown, considering my age, background, and religion. One of the most commonly asked questions that comes up for me in interviews, podcasts, and speaking engagements is: how did you know you were ready to run for public office? Truth is, I didn’t know I was ready. I definitely did not feel ready. The main thing I thought about every step of the way was my insecurity and all the reasons why I was not ready. It is incredibly difficult to imagine yourself in a space where there isn’t someone who already looks like you represented. That’s the funny thing about imposter syndrome: when it creeps up on you, not only does it taint the perception of your abilities, but it makes you hyper-focus on your inabilities, too.

The Science Behind Imposter Syndrome

Imposter syndrome is loosely defined as constantly doubting your abilities and sometimes feeling not deserving of status or accolades. This phenomenon disproportionately affects high-achieving people who, oftentimes, will hold themselves back from greatness due to this mindset. Something that I found super fascinating when doing my research on imposter syndrome was that it is equally experienced among men and women. However, the way it is experienced differs depending on an individual’s race and gender.

As women, we already have the patriarchy stacked against us, and as women of color, we have an additive layer of racism on top of that. With all of that in mind, the last thing we need is to doubt ourselves. But these external factors actually play a role in the way imposter syndrome manifests itself. Research finds that imposter syndrome affects women who are of an ethnic minority both mentally and academically, whether it be the fear that they do not belong in academia, or via hideous forms of racism and sexism.

For me, imposter syndrome manifested itself as constant focus on my insecurities (along with the underlying fear of not being good enough). How did I overcome this? I didn’t. One of the most powerful things you can do is to act in spite of your insecurities. When I first ran for public office, I already questioned myself and my abilities, and I knew the world was ready to question me, too. The reality is, I gave off a persona as someone who was confident in her ability, and people did not question what I brought to the table. The moment you begin to doubt yourself is when you give others an invitation to do so as well. For some, imposter syndrome does not go away, but the goal is to live in conjunction with these doubts and fears and act in spite of them — not to let them hold you back.

The Facts Behind What It Takes to Run For Office

Simply put: if you have the thought or inclination to want to run for public office, then you are already in a greater position to run than the average person. I tell people all the time, it is not a “normal” thought or desire to want to run for public office; it takes a specific kind of person with a certain work style and mentality to have this desire. Growing up, I always wanted to be involved in government somehow. There was an ongoing joke in my family that I could be president one day, as I am the first person in my family born in the United States.

Apart from the desire to run for public office, you need passion. Passion for the issues, the people, the potential to make change and the responsibility. There will always be people who know more than you, maybe have more experience than you do, but something someone should never be able to question is the passion you hold. Passion can’t be faked, it can’t be taught, and it cannot be bought. Passion is innate and is absolutely necessary to run for public office.

What can be taught, on the bright side, is how to run a campaign. Campaigning is not as daunting as it seems, and if you have the inclination to want to run, coupled with the passion, your campaign can and will turn out to be quite successful. I ran for public office twice before getting elected and learned a ton from both campaigns. My first campaign garnered me quite a bit of exciting national media attention, and even had me gracing the cover of Time magazine. As awesome as all of that was, none of it translated to votes in the community. Despite us being in the era of social media and digital consumption, campaigns are still won the traditional way; by knocking on doors, meeting people at events, and by participating in public forums. It was an important and humbling lesson — but without it, I don’t think I would have won my future campaign.

Things You Can Proactively Do to Prepare to Run

This may sound bold, but there was nothing I did that prepared me to run for public office the first time, because I had no idea what I was getting into. The second time around, I knew which type of person I wanted to connect with, what types of policies I wanted to be a part of my platform, and how to strategically fundraise. With all of that in mind, I met with 50 people before deciding to run for office the second time, which is why the best thing you can do to prepare for a run is network, network, network. Meet as many people as you possibly can; from current to former elected officials, to people who live in your district and community, to people who have worked on campaigns. The best thing you can invest in when preparing a campaign is the people behind it. Never turn help away, and don’t shy away from asking for things.

Don’t let imposter syndrome hold you back from running for public office. If you’ve read this op-ed, you actually already have everything it takes to run. Want to learn more? Check out Vote Run Lead to get even more tools to stage your own run for office. I’ll be cheering you on!