The number of Victorian motorists issued with speeding fines detected by mobile cameras has almost doubled in the past year, with more than one million infringement notices handed out between January and November 2021.

The latest data obtained by The Age revealed that the introduction of the state’s T-Series mobile cameras and a 75 per cent increase in their hours of operation had contributed to a massive surge in fines from 613,315 in 2020. 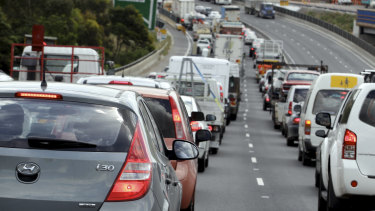 Fines from mobile speed cameras has surged in Victoria.Credit:Paul Rovere

The fleet of about 150 new cameras, which can detect speed across six lanes and book multiple drivers at once, were purchased as part of a $120 million Andrews government program to significantly expand the state’s speed monitoring network.

Despite the dramatic increase in enforcement action, Victoria has recorded 235 deaths so far in 2021, which is up more than 10 per cent on 2020, when 211 motorists died.

Assistant Commissioner Glenn Weir, who is responsible for road policing in Victoria, said a reduction in traffic during lockdown had contributed to an alarming number of motorists driving at dangerously high speeds.

“Unfortunately, many motorists think that it’s ok to drive a little bit over the speed limit,” Assistant Commissioner Weir said.

“Speeding remains the number one cause of fatal and serious injury collisions on Victorian roads. While we don’t want to issue infringements, our role is to prevent people from becoming seriously injured or dying on our road.”

Opposition police and community safety spokesman Brad Battin claimed that some new cameras were being used to generate revenue rather than improve safety.

“At the same time as road camera revenue has spiked, road policing has been cut and highways and local roads continue to fall apart,” Mr Battin said.

“Daniel Andrews must stop using camera revenue to prop up his broken budget and get serious about keeping Victorians safe on the road.”

A Victorian Government spokeswoman said it had boosted road camera hours by 75 per cent in 2019 on the advice of the Monash University Accident Research Centre, which was responding to a spike in the rate of road deaths.

“Increased enforcement and more people travelling on our roads this year has led to an increase in the number of people caught breaking the law, and an increase in infringements detected.”

The T-series cameras are manufactured by Swedish-based Sensys Gatso Group and operated by Serco Asia Pacific on behalf of the Department of Justice and Community and Community Safety.

Victoria Police is responsible for the enforcement of the fines, while also approving about 2000 locations across the state where the cameras can be deployed.

Professor Stuart Newstead from the Monash University Accident Research Centre defended the new cameras and their increased use.

“The research we’ve done on the mobile camera program shows it’s extremely effective … We’ve looked at it in other jurisdictions, in Queensland and Western Australia, and each time we find that mobile cameras are a highly efficient way of enforcing speed limits, and they contribute to significant trauma reduction,” Professor Newstead said.

He dismissed criticism that the expansion of the program was motivated by a need to repair the state’s beleaguered budget.

“People obviously complain a lot and refer to it as revenue raising, but if you don’t have a penalty associated with an infringement then what is the deterrence value?” Professor Newstead asked.