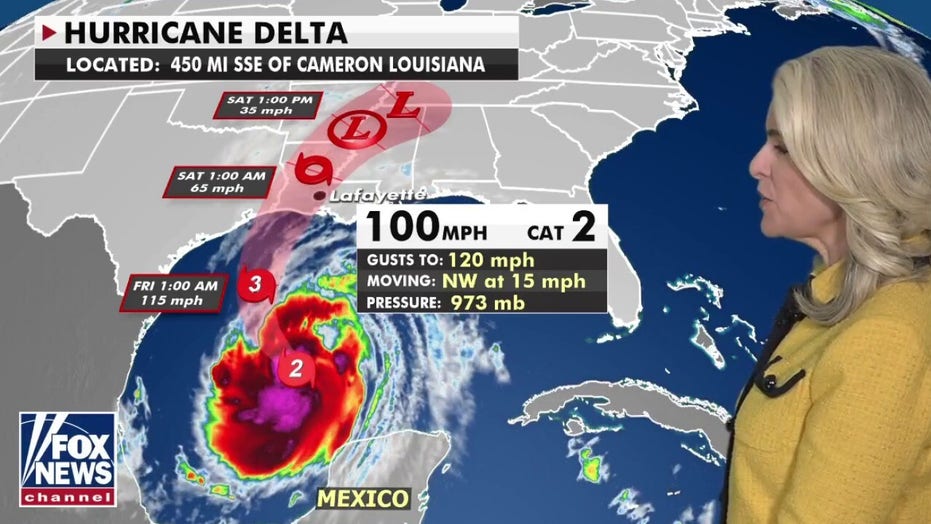 A recharged Hurricane Delta has Louisiana in the crosshairs for a sixth time during this year's busy hurricane season as officials have ordered evacuations for vulnerable coastal areas.

Delta is back into the Gulf of Mexico after making landfall over Mexico on Wednesday, which allowed it to weaken while it was over land.

But now that it's back over the warm waters of the southern Gulf of Mexico, forecasters from the National Hurricane Center (NHC) said that Delta is once again gaining strength as it nears the U.S. Gulf Coast.

As of early Wednesday, Delta is a Category 2 hurricane with maximum sustained winds of 100 mph as it moves northwest at 15 mph. The storm is located about 450 miles south-southeast of Cameron, La. 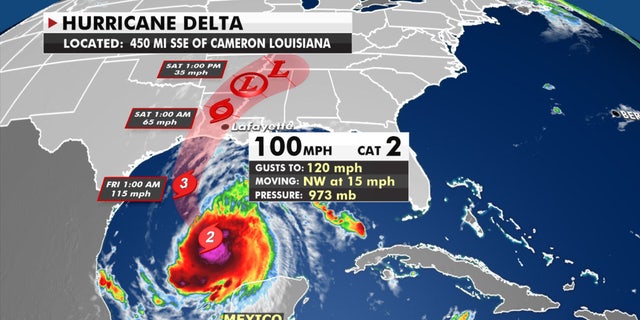 Delta has a chance to strengthen to a major hurricane –­­ Category 3 or higher –­­ once again before making landfall across Louisiana on Friday with hurricane-force winds, life-threatening storm surge, heavy rain, and flooding. 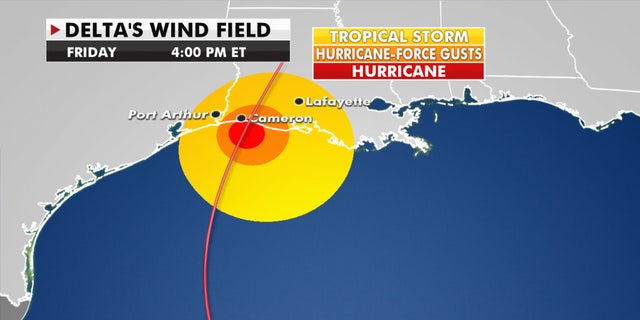 Some tornadoes will also be possible, especially east of where the center of the system comes ashore. The greatest threat of tornadoes is in southern parts of Louisiana and Mississippi starting late Wednesday night. 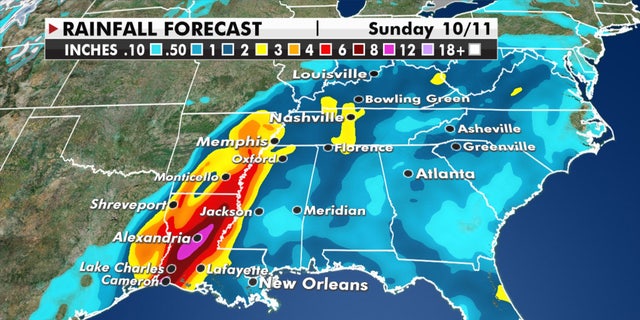 Rainfall of 5-10 inches will be possible with some isolated spots receiving over a foot. 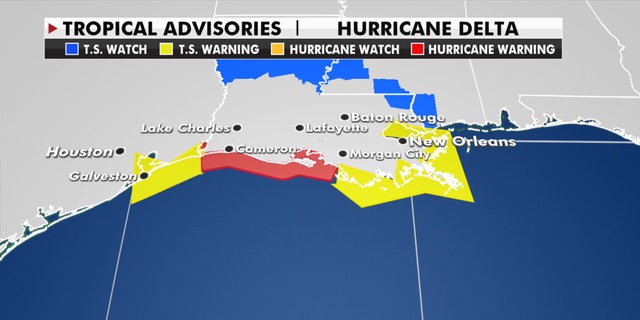 Hurricane and tropical storm warnings have been posted along the Gulf Coast as Hurricane Delta approaches.
(Fox News)

BEST WAY TO PREPARE FOR A STORM SURGE

Storm surge and hurricane warnings are now up along the Gulf Coast, where the NHC warns that a "life-threatening" storm surge of up to 11 feet is possible from Pecan Island to Port Fourchon, La. 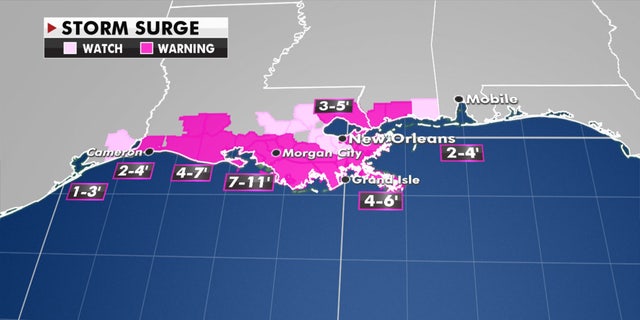 Residents need to pay close attention to the forecast and their local officials for guidance. 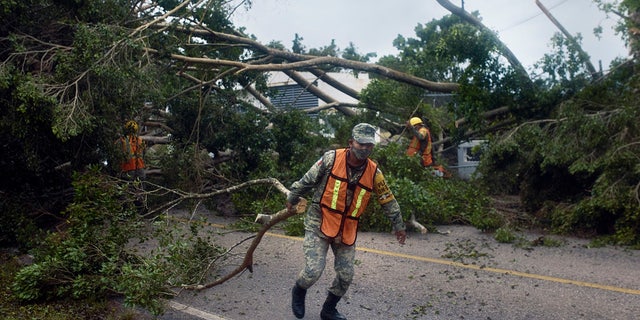 There were no reports of any deaths or injuries, according to Carlos Joaquín González, the governor of the state of Quintana Roo.

"This season has been relentless" 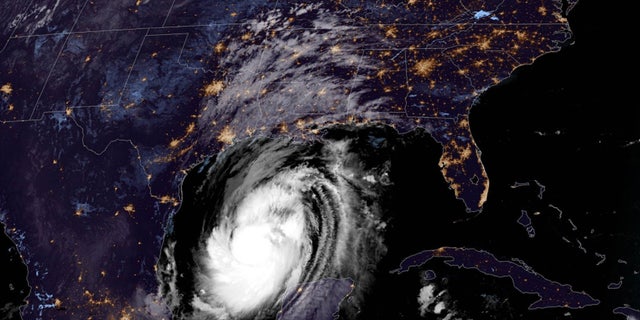 The latest storm on a path towards the Gulf Coast puts Louisiana in the crosshairs of the dreaded cone of uncertainty yet again for a sixth time this season.

The state of Louisiana has had its share of near-misses with Hurricane Sally skirting to the east and Marco dissipating but the state also bore the brunt with Hurricane Laura blasting into the Lake Charles area as a Category 4 storm and was flooded by Tropical Storm Cristobal back in June. 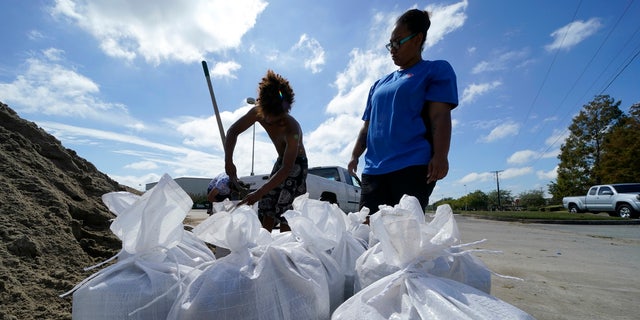 "This season has been relentless,” Louisiana Gov. John Bel Edwards said during a news conference on Wednesday. “Prepare for the worst. Pray for the best.”

Edwards said he was concerned about the impacts if the storm goes directly over the Lake Charles region, where homes still have blue tarps covering damage from Laura.

Officials are now working to try to clear as much debris as they can before Delta arrives.

“In terms of debris flying, anything that’s sharp or that’s light that can be picked up […] things like metal, tin, some of that construction debris I think we all need to be really cognizant of that and if you can secure it, do so," she told KLPC-TV.

Edwards said that more than 7,500 utility workers are standing by in Louisiana with more than 8,000 waiting outside the state, but power restoration in the Lake Charles region could take even longer due to infrastructure still being fixed from Laura. 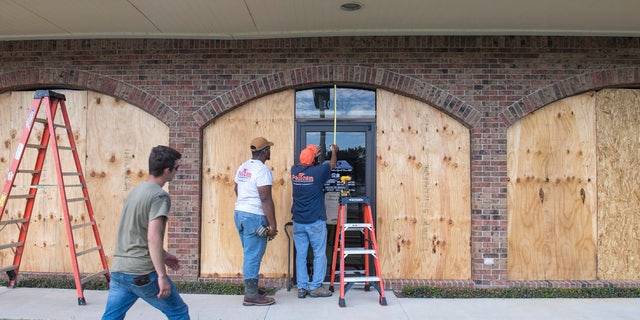 Bernie Arnould, center, gets help from Kaden Ashley and D.J. Hebert, left, all with Pelican Companies, as they board up the windows to the front of MC Bank in Amelia, La., Wednesday, Oct., 7, 2020, in In preparation for Hurricane Delta.
(Chris Granger/The Times-Picayune/The New Orleans Advocate via AP)

Nearly six weeks later, some 5,600 people remain in New Orleans hotels because their homes are too damaged to occupy.

Edwards said late Wednesday President Trump has agreed to sign a federal emergency declaration in advance for the state.

Mandatory evacuations have been issued for Calcasieu Parish, Jefferson Davis Parish, and most of Cameron Parish ahead of Hurricane Delta. A voluntary evacuation has been issued in Beauregard Parish.

On Grand Isle, dozens of contractors were working around the clock to repair a damaged levee before Delta's storm surge arrived. The Louisiana National Guard was working to bring in 350 super sandbags to protect the island.

“Our mission is to replace sandbags washed out by previous storms,” Capt. Justin Bryson with La. National Guard told FOX8.

Storm-battered residents spent Wednesday doing what they could do prepare for the storm, with plywood flying off the shelves at area stores and fishing boats being taken to safe harbor. 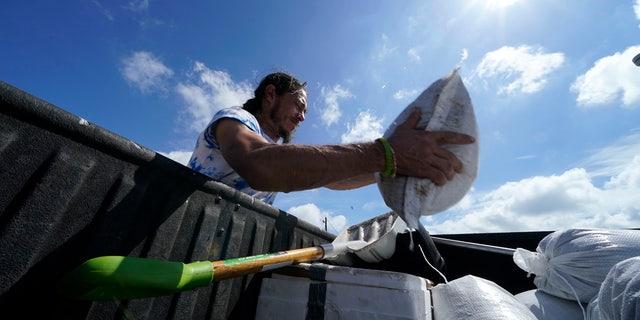 Residents fill sandbags to protect their home in anticipation of Hurricane Delta, expected to arrive along the Gulf Coast later this week, in Houma, La., Wednesday, Oct. 7, 2020.
(AP Photo/Gerald Herbert)

“I think that the stress is not just the stress of the storm this year, it’s everything – one thing after another,"  Vermilion Chamber of Commerce Executive Director Lynn Guillory told the Associated Press. “Somebody just told me, ‘You know, we’ve really had enough.’"

It's not only the residents who have had enough.

Even forecasters at the National Weather Service (NWS) forecast office in New Orleans noted in their forecast discussion on Tuesday they've had their limits as there are eight weeks of hurricane season left.

“Not seeing any signs of any additional tropical weather in the extended which is OK with us because we are SO DONE with Hurricane Season 2020,” they wrote.