MEXICO CITY (Reuters) – Mexico’s government on Wednesday showed dramatic video footage of the moment its forces briefly captured a son of kingpin Joaquin “El Chapo” Guzman this month before they were ordered to release the suspected trafficker to avoid a bloodbath. “I don’t want a mess, please,” Ovidio Guzman says in the video on a mobile phone to his brother, urging him to back down, as cartel gunmen converged on Guzman’s house.

With President Andres Manuel Lopez Obrador looking on, top security officials showed the video during a blow-by-blow account of the Oct. 17 arrest of Guzman, which sparked chaotic scenes in the northern city of Culiacan.

Facing threats against the public and relatives of the armed forces, the security cabinet ordered Guzman to be freed. This led to stinging criticism that the release had encouraged organized crime to hold the government ransom.

“What could have become a scene of war and the shedding of innocent blood was resolved in favor of a return to peace and protecting the population,” Security Minister Alfonso Durazo said during the presentations at a regular news briefing.

Shortly afterward, Defense Minister Luis Crescencio Sandoval played helmet camera footage of the operation by heavily armed military police on Ovidio Guzman in a residential compound near the center of Culiacan in the state of Sinaloa.

In the video, black clad, masked police with rifles advance on foot and surround the entrance. One drops to his knee, his gun cocked. Gunfire crackles in the background. Seconds later, the door opens and a young woman emerges with her hands up.

Behind the woman, the slim figure of Guzman stands in the doorway wearing a baseball cap. Soon after, he sidles out, briefly puts up his hands, and raises his cap.

For a few seconds, police hold him with his hands against a wall. By the time the camera pans away and returns, Guzman has straightened up and begun talking on a mobile phone.

“Stop everything, listen, stop everything, I’ve surrendered,” Guzman can be heard saying as police look on. “Tell them to fall back. I don’t want a mess, please.”

Sandoval said the call was to Guzman’s brother, who “says he won’t stop, he even threatens military personnel and their families.”

Cartel gunmen surrounded the residence and staged gun battles and set up burning roadblocks around Culiacan, causing widespread panic. Later that afternoon, police withdrew from the residence without Guzman.

For over an hour, the defense minister mapped out the chronology of events from when U.S. prosecutors last month called for Guzman’s arrest and extradition, up to the raid. 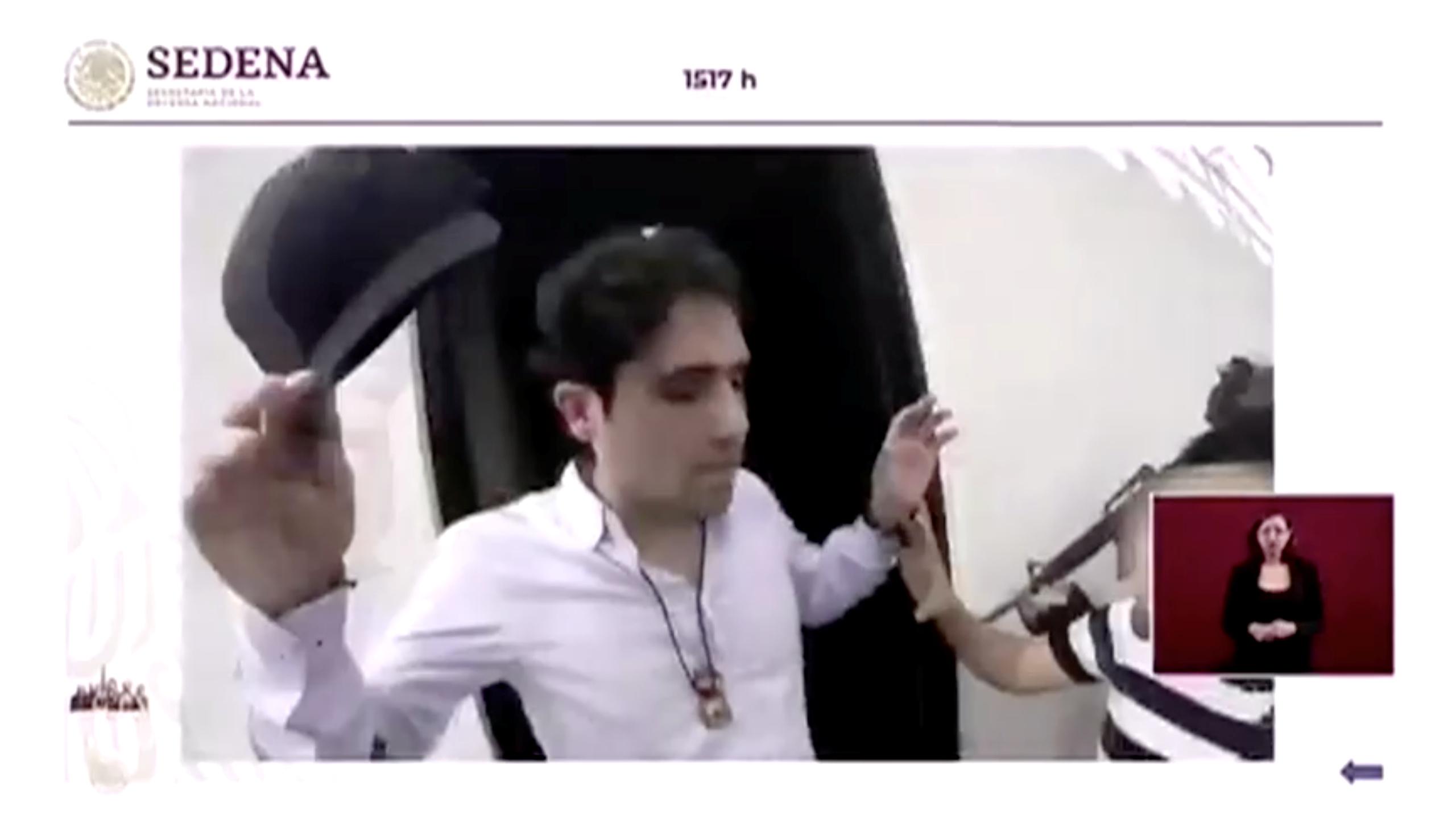 Aerial imagery of Culiacan demarcated the planning and positioning of security forces and showed where firefights broke out. In separate footage, truck after truck of gunmen were shown barreling over a bridge. Two buses pulled into an intersection to discharge frightened passengers. Sandoval said cartel members seized the vehicles to block the road.

In another video, a member of the military lies bleeding on the back of a pickup, his lower leg shattered.

Ovidio’s father, Joaquin “El Chapo” Guzman, led the powerful Sinaloa Cartel for decades, escaping prison twice before being arrested and extradited to the United States, where he was found guilty in February of smuggling tons of drugs and sentenced to life in prison.