WHEN she looks at photos of the mangled wreckage of her car, Kylie Benson still can't believe she escaped from it alive.

The 16-year-old had been driving to see her grandma when she collided with a huge speeding truck which dragged her car down the road, eventually causing it to burst into a fireball. 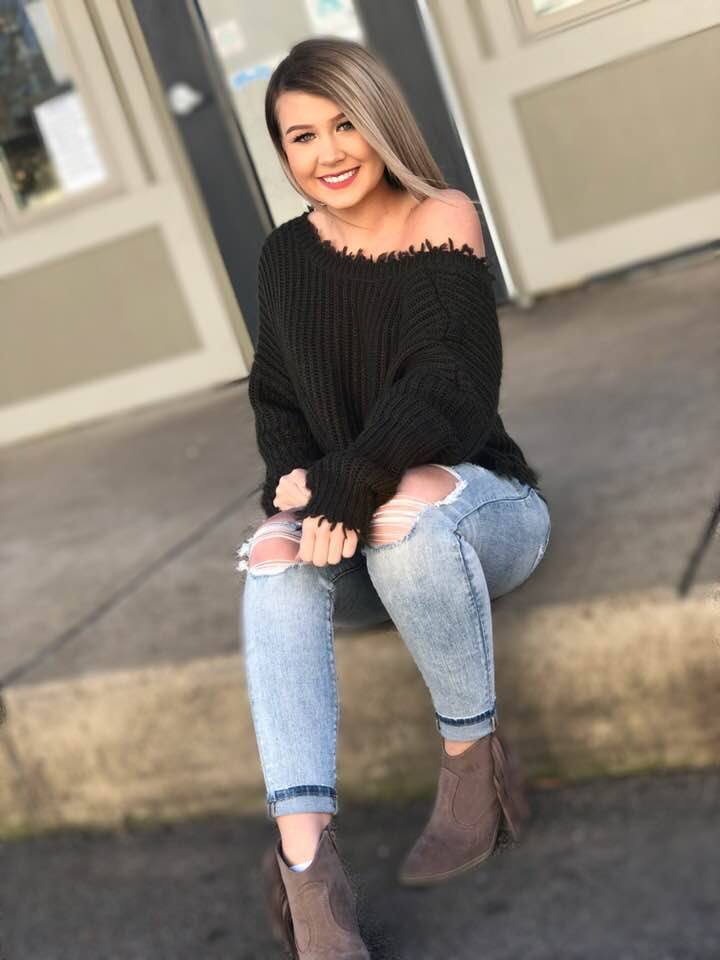 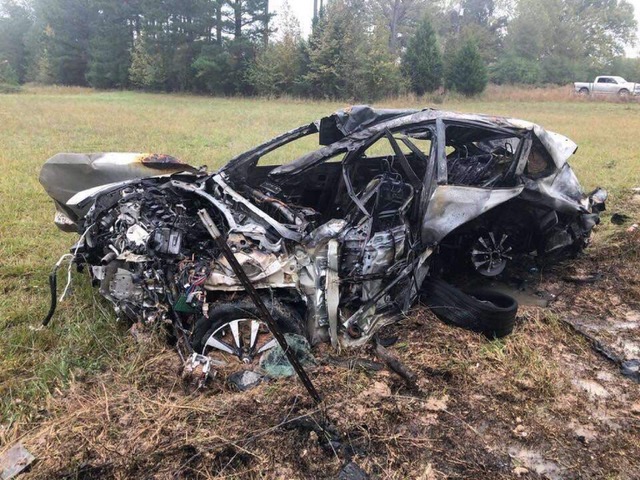 As her seatbelt melted to her body, Kylie's survival instinct kicked in and she crawled out of the smashed driver door window, before rolling on the grass to put out the flames licking her body.

It was a long road to recovery, with the teenager needing 19 operations to help her recover from 75 per cent third degree burns. She also lost most of her right hand and had to re-learn how to walk, talk, eat and write.

Now 18, Kylie, from Paris, Texas, hopes to become a burns counsellor and is sharing her inspiring story to help other survivors like her.

It was a cold, damp, foggy October day in 2019 when Kylie got in her car to make the 30-mile trip from her home in Valliant, Oklahoma to her grandma Jan Beene’s house in Spencerville.

Kylie wasn’t worried about the road conditions, having driven there many times.

“At the time I was taking a break from home schooling and I was looking forward to seeing my lovely grandma,” says Kylie.

“Besides being a full-time student, I was a photographer and I was planning to show her some of my pictures."

Kylie was making good time until she drove over the brow of a hill – at which point her life changed forever. 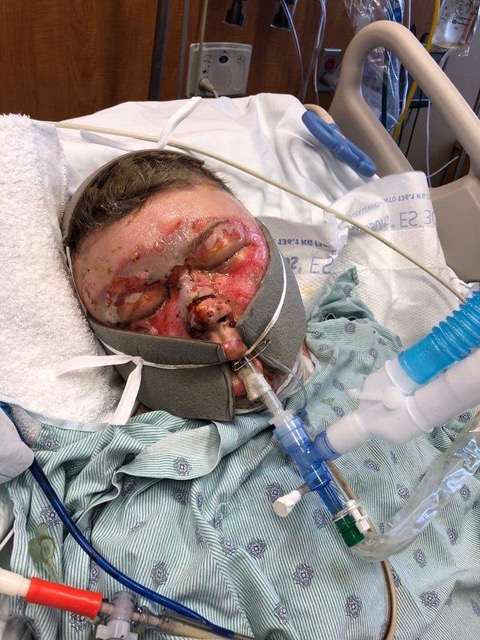 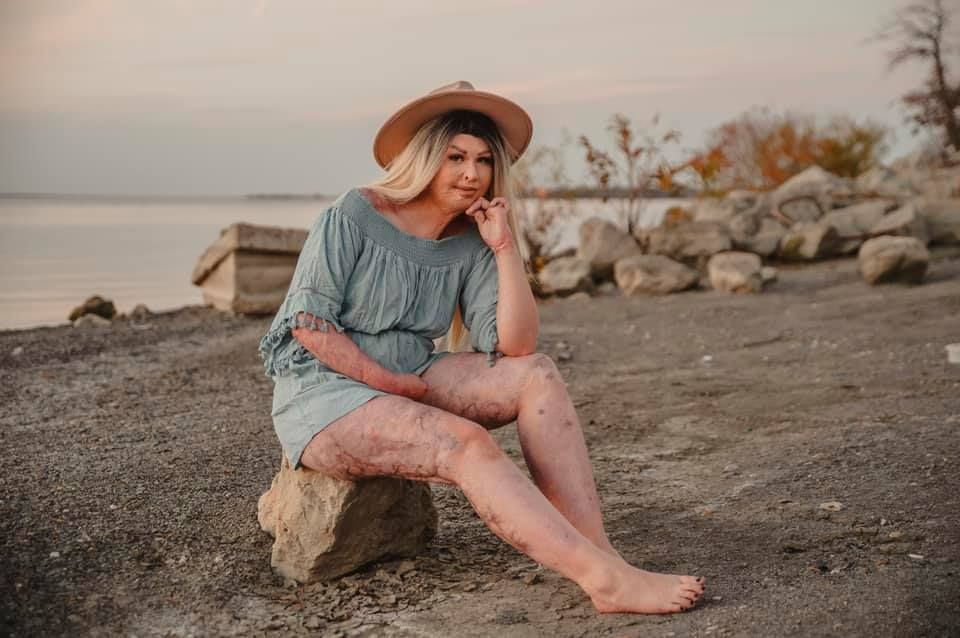 Due to the fog, Kylie didn't see a four-way stop sign until late, at which point she slammed on the brakes. As she did so, a huge truck came careering towards her travelling at 85mph.

The driver didn’t see Kylie and drove over her, wedging her car under its hub.

Kylie recalls: "I screamed, 'I don’t want to die like this!' The truck came to a standstill and fell on its left side which caused my car to shoot from under the lorry and across to the other side of the road where it burst into flames.

“It was so weird because I was fairly calm as I sat there with the seat belt melted to my body. I think it must have been the shock.

“I tried to get the seat belt off me and it did give way, so I crawled out of the smashed driver’s door window as the door was crushed, and I walked away on fire.

“It sounds crazy, but I’m not even sure I was aware that I was burning.”

It sounds crazy, but I’m not even sure I was aware that I was burning

Seconds after she walked from her crushed, blazing car, a woman pulled over at the side of the road.

Horrified to see Kylie on fire, she told her to roll on the grass to put out the flames.

As she did so, Kylie passed out, and when she woke up she was surrounded by firemen and paramedics.

She recalls: "I heard a fireman say, ‘It’s going to blow,’ and a split second later, my car blew up – I could feel the vibrations from the blast through the ground and in the air.

“I was so lucky that I wasn’t in it, because I would have died. To this day I still don’t know how the heck I walked out of that mangled, burning car. My guardian angel worked overtime that day!” 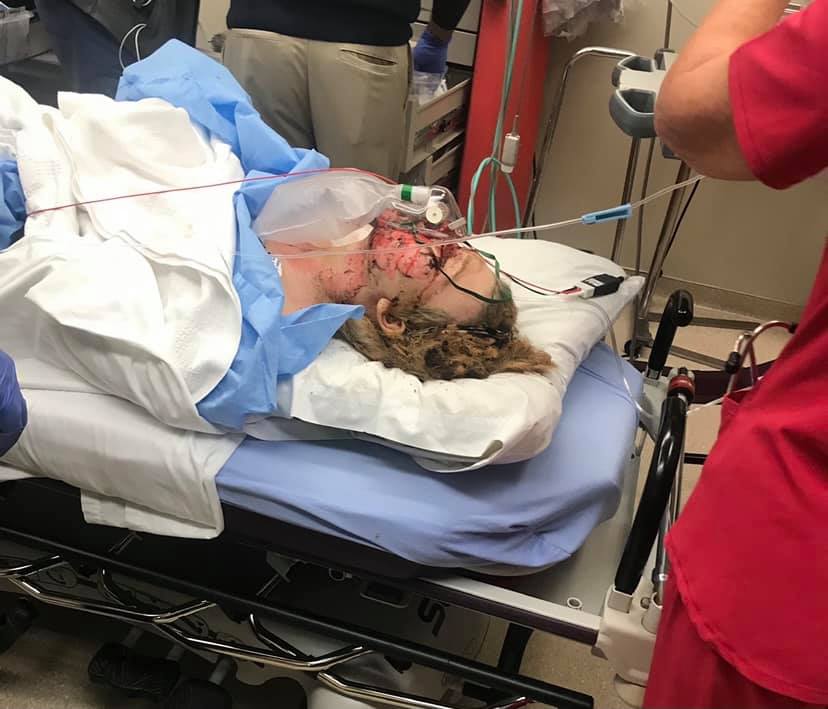 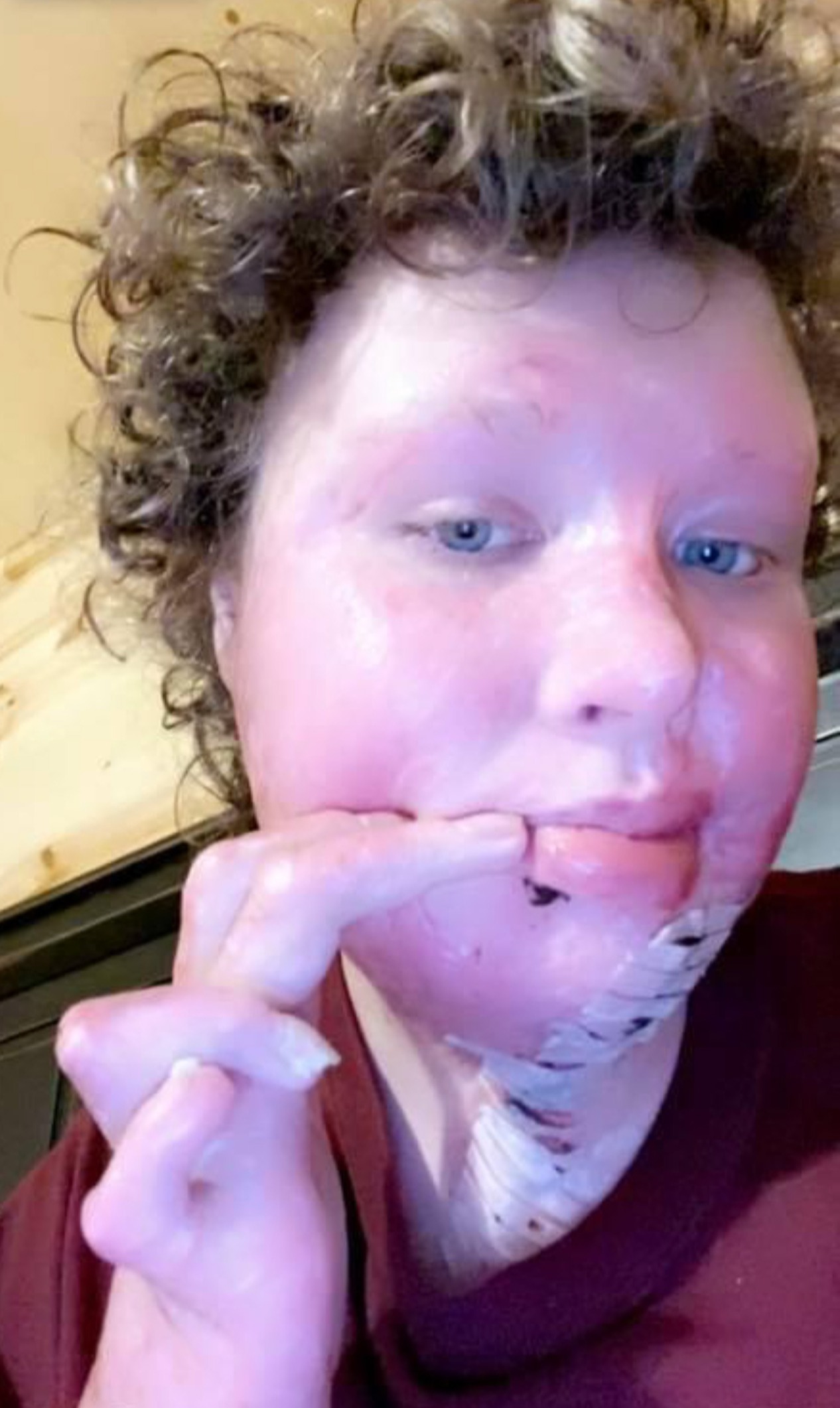 Kylie was rushed to a burns hospital for specialist treatment.

She was in such a state, barely alive as the doctors peeled off what was left of her clothes.

Her mum Alesha walked into the room crying, and Kylie asked if she was "going to see Trista" – her best friend who had sadly taken her own life four months earlier.

"Mum didn’t say anything but I knew it was serious by the way she looked at me," Kylie says.

"Doctors told my family if I made it through the night I had a 20 per cent chance of survival. The odds were definitely not in my favour.

Every rib in my body had been broken, a lung had collapsed and my spine was fractured in three places… it was touch and go whether I'd survive

“I was put in a coma for two weeks to help my body start to heal.

"Every rib in my body had been broken, a lung had collapsed and my spine was fractured in three places.

“I suffered third degree burns over 75 per cent of my body from my forehead to my knees.

"It was touch and go for days as to whether I would survive but every day somehow, I got a tiny bit stronger than the day before."

When Kylie woke up, wrapped head to toe in bandages, her step-dad John, who is her best friend and supporter, was sitting beside her.

She recalls: "All I said was, ‘Dad please don’t leave me again,” and he smiled in relief."

From then on, Kylie says life was "absolute hell".

Every two days, she was wheeled into a room called The Tank where the bandages were removed and her skin scrubbed.

She says: “The pain was excruciating despite the pain medicines they gave me. I just had to lie there and take it which was pure torture.

“My doctors started doing more skin grafts. The night of the accident, they had taken skin from my knees and left side to start the slow process. I have never felt pain like it and pray I never do again.”

Kylie was released from hospital after three months – but the week before, doctors were forced to amputate the fingers on her right hand from the knuckles down because they were infected.

It was another cruel blow to the brave teenager, but she was determined to recover.

After she went home, she had to learn to walk, write and eat again.

“It was like being reborn,” recalls Kylie. “Yet throughout it all, I kept my faith that this all happened for a reason and that gave me some sense of peace, even on the really difficult days when I was frustrated or in pain.

“One of the most difficult things was coming to terms with my scars. For a long time I refused to look at myself in the mirror.

“I felt ugly, like no one would ever want me. But gradually, after 19 surgeries, I have also found peace with that too.

“I’ve accepted that I am a different person now and that person is who I was meant to be. I think that my best friend Trista was my guardian angel that day and she saved me to help others.”

After 19 surgeries, Kylie is attending the University of Phoenix and she’s hoping to eventually become a burns counsellor because she knows first-hand that she can make a big difference.

“People ask me all the time how I can love my life the way that I do after everything I’ve been through.

"I tell them I think of all the people who have it worse than me and they inspire me to get up every day.

"It’s a miracle I’m alive! I’m incredibly lucky and I hope my story will inspire others to fight for the life that they want." 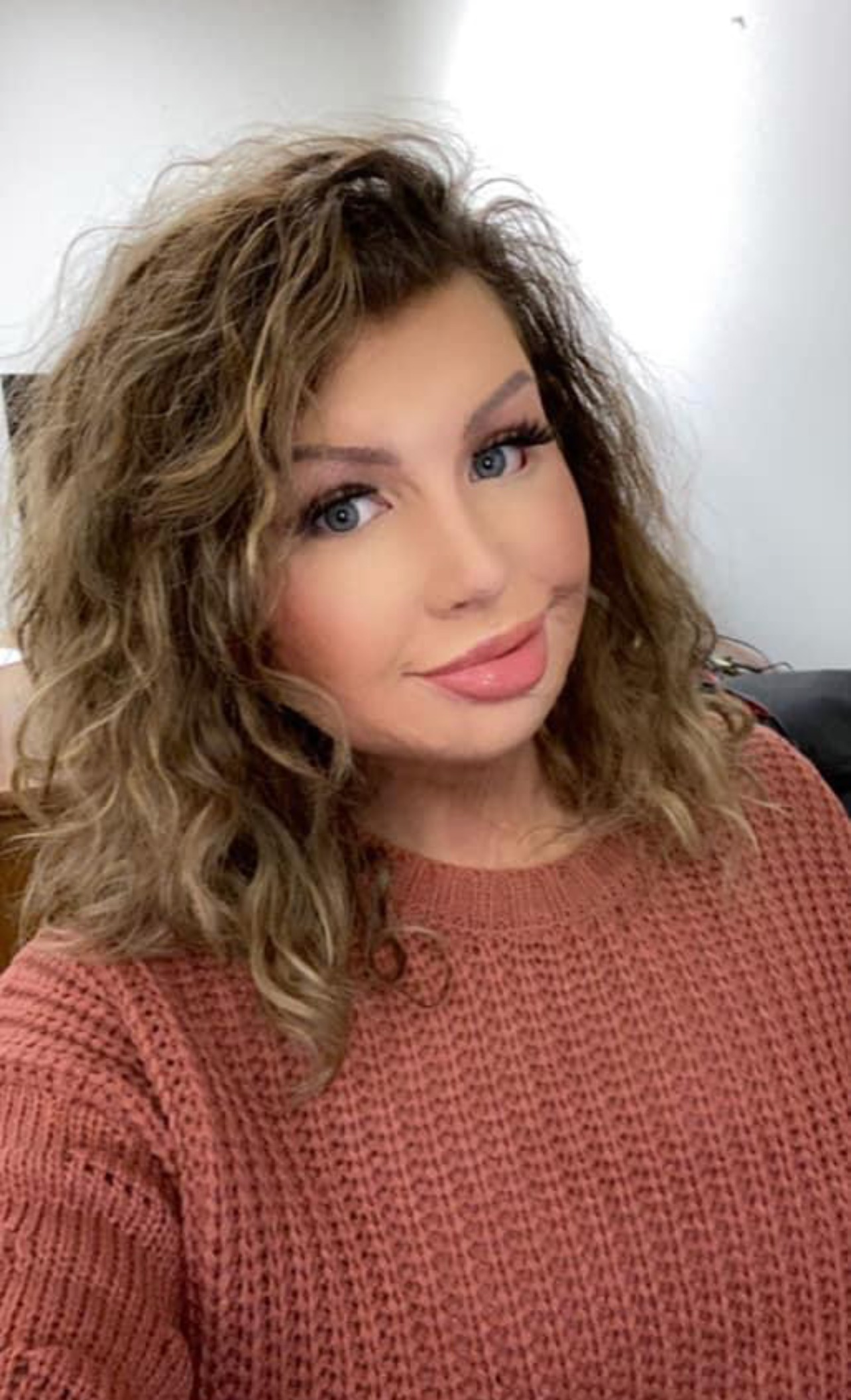 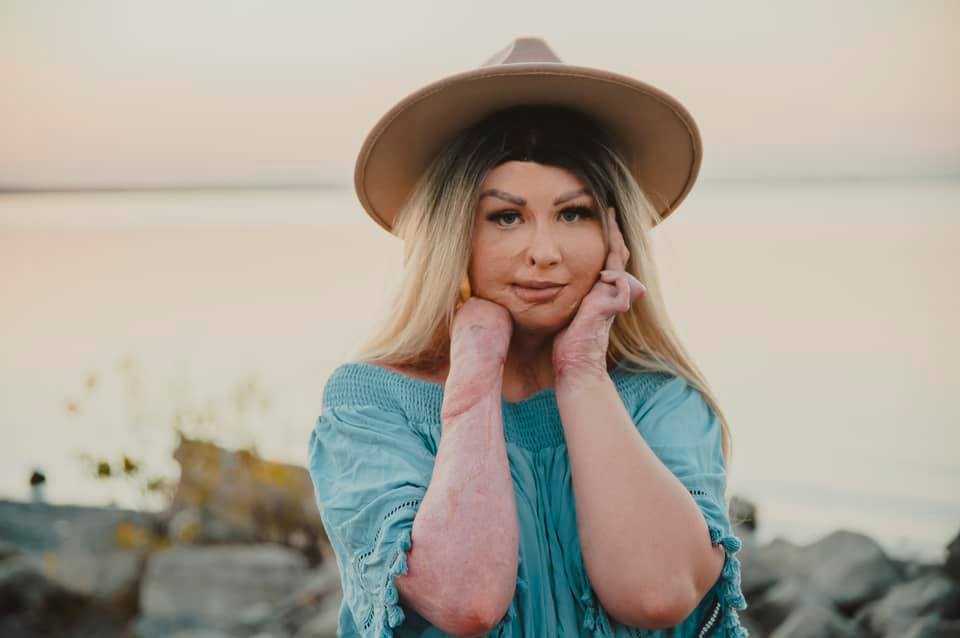 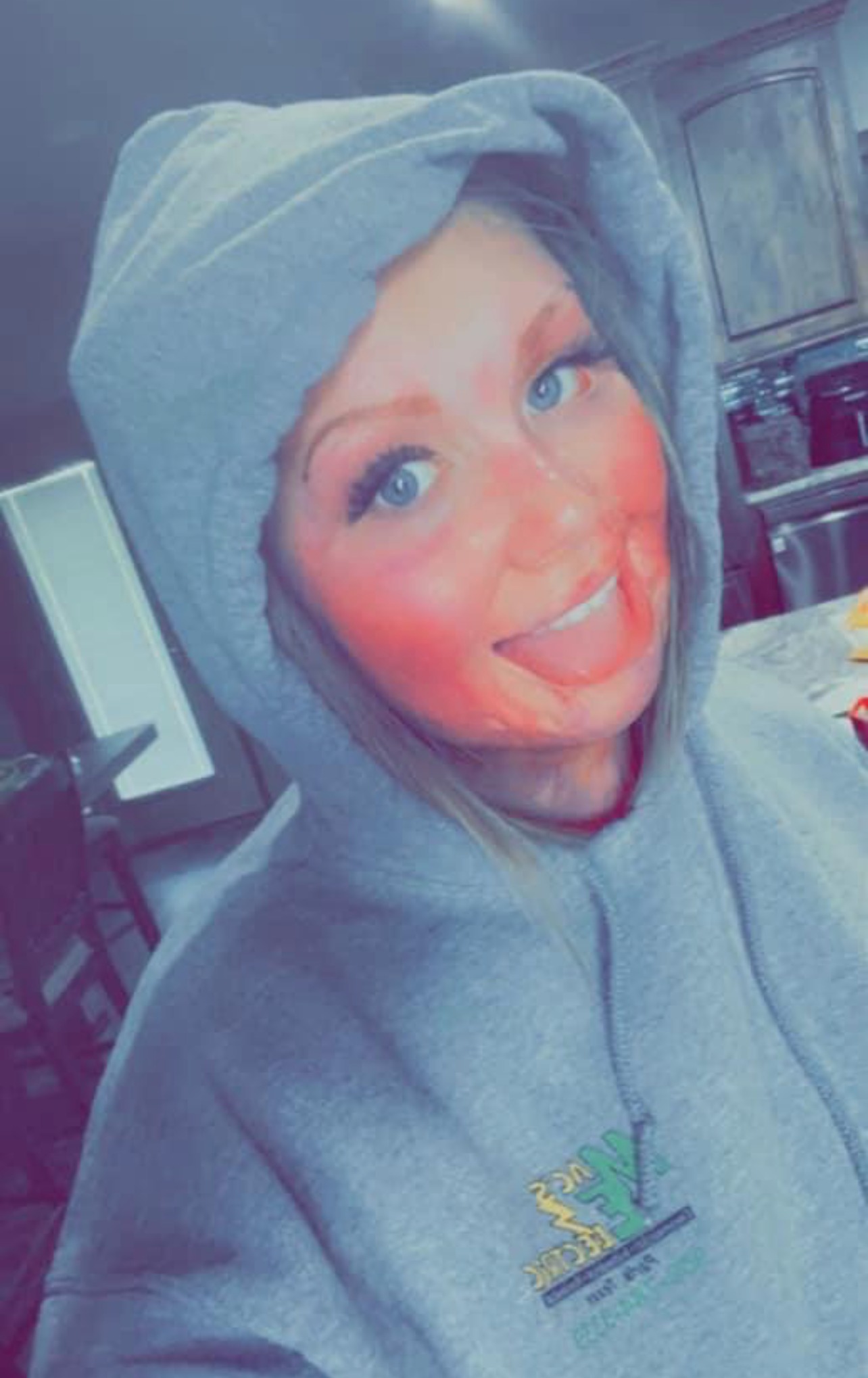