‘Manafort is hardly a menace to society’: Giuliani says Trump may pardon his former campaign chairman but not until after the Mueller probe ends, as he claims that impeaching the President would spark ‘a people’s revolt’

Donald Trump’s lawyer downplayed Paul Manafort’s conviction and says he believes the president may pardon him.

The president’s attorney, Rudy Giuliani, told the New York Daily News: ‘It’s a white collar crime, who the heck is in jeopardy, the American public?’

‘I have as much sympathy for Manafort as the President does.’

And he added that Trump may even pardon Manafort.

‘He has the power to do it.

‘(Manafort) is hardly a menace to society.’

However Giuliani said he had advised the president not to pardon his former campaign chairman, at least not until the special counsel concludes its entire probe.

He also cautioned impeaching the president would lead to a revolt – after the president warned it will crash the economy and deprive Americans of their savings.

Speaking to the Washington Post, Giuliani said that Trump’s legal team told him he ‘should wait until all the investigations are over.’

Giuliani acknowledged telling the president, ‘You have to be sensitive to public optics.’

He discussed rumors that Trump could be impeached in an interview with Sky News after the news outlet found him at a golf course in Scotland. The president’s attorney said ‘the American people would revolt’ if the sitting president were forcibly removed from office. 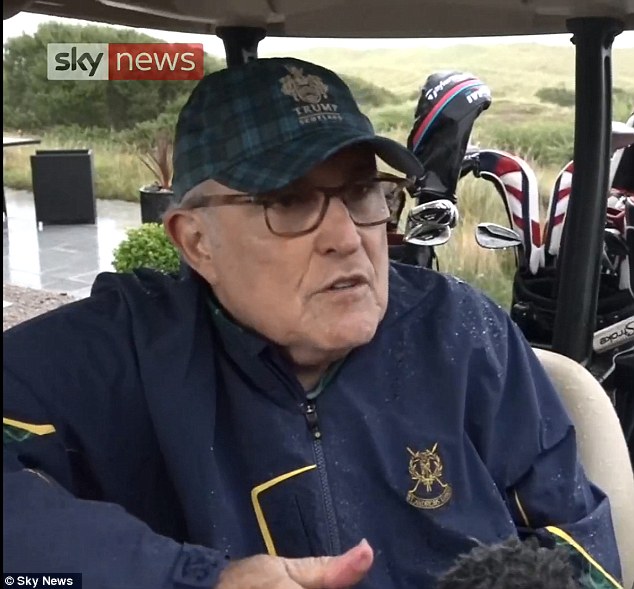 That dire warning, with implications of social upheaval, came after Trump issued a stark warning of his own – that an impeachment drive would end the nation’s economic run.

‘I will tell you what, if I ever got impeached, I think the market would crash, I think everybody would be very poor,’ Trump told ‘Fox and Friends’ in an interview that aired Thursday.

‘You would see — you would see numbers that you wouldn’t believe in reverse,’ he warned. ‘I don’t know how you can impeach somebody who has done a great job.’

The president made his warning as the bull market on Wall Street hit a record, after cheering drops in the nation’s unemployment rate for months.

Giuliani had been missing in action since the downfall on Tuesday of two former associates of the president, Paul Manafort and Michael Cohen.

As it turned out, the president’s personal lawyer was on a golf trip to Scotland.

He claimed Thursday, hours after Trump said he could not understand how somebody could be impeached who is ‘doing a great job’ like him, that the president had been completely cleared in the Cohen affair, and Congress has no reason to kick him out of office.

Trump had said in an interview with Fox & Friends, ‘If I ever got impeached, I think the market would crash. I think everybody would be very poor.’

‘I don’t know how you can impeach somebody who’s done a great job.’

Cohen pleaded guilty on Tuesday to eight charges, including campaign finance violations that he said he carried out in coordination with Trump.

The former lawyer to the president and his attorney accused Trump of directing criminal acts and said that Trump’s conduct makes him a felon. Giuliani, who is often a fixture on television, hit back in a statement denying Cohen’s claims but made no appearances on the president’s behalf. 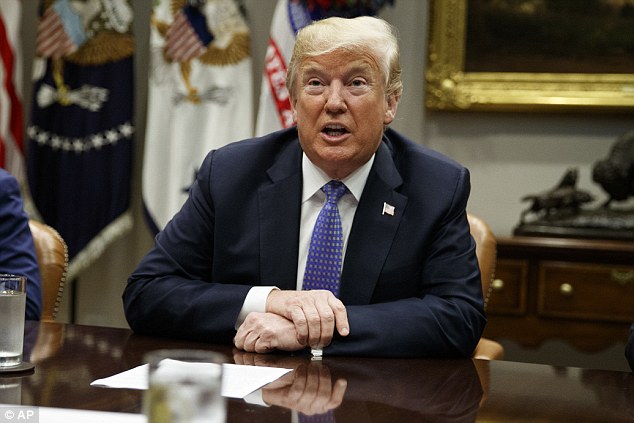 Trump said in an interview that aired on Thursday: ‘If I ever got impeached, I think the market would crash. I think everybody would be very poor’

Speaking to a Sky News journalist from Trump International Golf Links in Aberdeenshire, Scotland on Thursday, Giuliani said, ‘He didn’t collude with the Russians, he didn’t obstruct justice, everything Cohen says has been disproved.’

‘You could only impeach him for political reasons,’ Giuliani said, ‘and the American people would revolt against that.’

Giuliani can be seen wearing a Trump Scotland cap and speaking from his golf buggy in an interview clip in which he explains a discrepancy in Cohen’s claim that Trump directed him to try to buy the silence of Playboy model Karen McDougal and the president’s allegation that he only found out about the attempt after.

He told the broadcaster: ‘The tape recordings say very clearly that Cohen did it on his own, didn’t tell the president until much later.

‘It demonstrates that Cohen’s a liar and the U.S. attorney in the southern district of New York extraordinarily called him a liar.’

He added: ‘The reality is that the president has completely been vindicated by the whole Cohen incident.’

Giuliani also spoke to the Washington Post on Thursday.

He revealed a request for advice from the president on pardoning Manafort, who was convicted on eight counts of fraud on Tuesday, a few weeks back.

The president’s personal attorney said that he and the legal team advised Trump to hold off until the Mueller probe was finished and give potential pardons at least ‘3 to 5 weeks’ of breathing room.

‘He said yes,’ Giuliani told the Post. ‘He agreed with us.’

The reason for waiting he said is that Mueller could use it against Trump.

;We sat him down and said you’re not considering these other pardons with anybody involved in the investigation. He said yes, absolutely I understand,’ Giuliani said. ‘The real concern is whether Mueller would turn any pardon into an obstruction charge.’

His claim in that interview that he’d talked to Trump about pardoning Paul Manafort contradicted a statement a day prior from Trump’s White House spokeswoman. She said a pardon had not been discussed at the White House, although she did not explicitly rule one out during an exchange on Wednesday with DailyMail.com.

Trump jumpstarted the conversation about a pardon with a tweet on Wednesday morning sympathizing with his former associate who will otherwise spend the rest of his life in prison.

‘He feels Manafort has been mistreated. Nobody in a case like this gets raided in the middle of the night, put in solitary confinement,’ Giuliani said. ;They tried to crack him and it didn’t work. Over the last two to three weeks, he’s expressed anger and frustration about how he’s been treated.’