WASHINGTON (Reuters) – U.S. President Donald Trump on Tuesday proposed the creation of a Palestinian state with a capital in eastern Jerusalem, in an effort to achieve a peace breakthrough with Israel that will be a tough sell for Palestinians.

In exchange, Israel would agree to accept a four-year freeze on new settlement activity while Palestinian statehood were being negotiated.

“Today, Israel has taken a giant step toward peace,” Trump said, adding that he had sent a letter about the proposal to Palestinian President Mahmoud Abbas.

“This is a historic day,” Netanyahu said, comparing Trump’s peace plan to former President Harry Truman’s 1948 recognition of the state of Israel.

“On this day, you became the first world leader to recognize Israel’s sovereignty over areas in Judea and Samaria that are vital to our security and central to our heritage,” he added, using the Biblical names for the West Bank.

Palestinian leaders had rejected Trump’s long-delayed plan even before its official release, saying his administration was biased towards Israel.

The absence of the Palestinians from Trump’s announcement is likely to fuel criticism that the plan tilts toward Israel’s needs rather than theirs.

Israeli-Palestinian talks broke down in 2014, and it was far from clear that the Trump plan will resuscitate them.

Palestinians have refused to deal with the Trump administration in protest at such pro-Israeli policies as its moving the U.S. Embassy in Israel from Tel Aviv to Jerusalem, he east of which is sought by the Palestinians.

U.S. senior administration officials said they expected initial Palestinian skepticism over the plan but hoped that over time they will agree to negotiate. It places high hurdles for the Palestinians to overcome to reach their long-sought goal of a state.

“Strip away the domestic and Israeli political considerations that determined the timing of the plan’s release, and the message to the Palestinians, boiled down to its essence, is: You’ve lost, get over it,” said Robert Malley, president of International Crisis Group and a former U.S. National Security Council official.

It remains to be seen also how Israel responds, given the pressures its right-wing prime minister, Netanyahu, faces going into his third attempt at re-election in less than a year.

Both Trump and Netanyahu face political challenges at home. Trump was impeached in the House of Representatives last month and is on trial in the Senate on abuse of power charges.

On Tuesday, Netanyahu was formally indicted in court on corruption charges, after he withdrew his bid for parliamentary immunity from prosecution. Both men deny any wrongdoing. 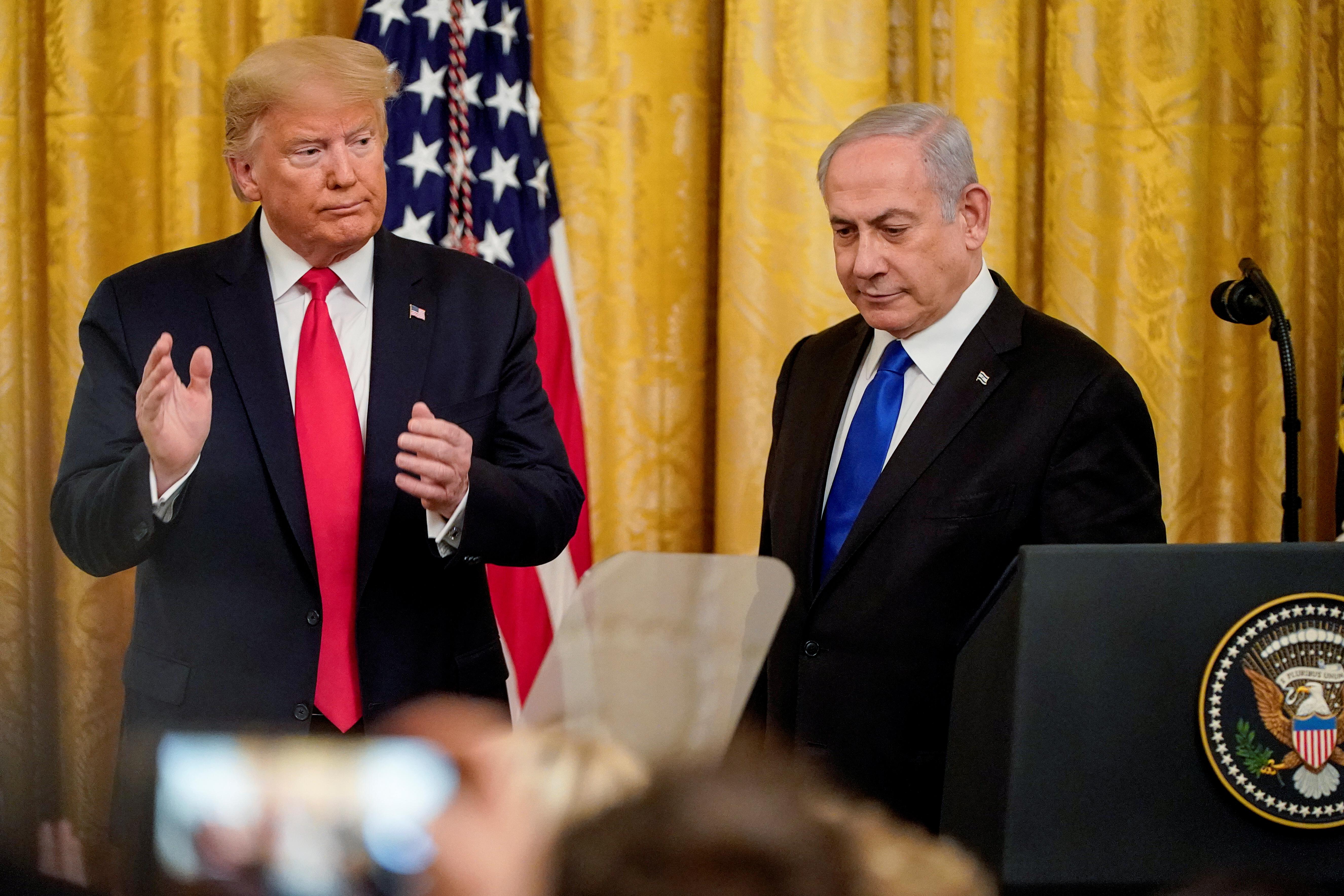 The U.S. plan represented the most dramatic and detailed attempt to break the historic deadlock between Israel and the Palestinians in several years, the result of a three-year effort by Trump senior advisers including his son-in-law Jared Kushner.

Trump has endorsed a proposed map outlining the two states, U.S. officials said. The Palestinian state would be double the size of land that Palestinians currently control and would be connected by roads, bridges and tunnels, they said.

Israeli leaders have agreed to negotiate on the basis of the Trump plan and agreed to the map, the officials said. Israel’s agreement on statehood for Palestinians is dependent on a security arrangement to protect Israelis, they said.

A U.S. official said the question for Palestinians is will they “come to the table and negotiate?”

If they agree to negotiate, there are some areas that can be compromised in the future, the official said without offering details.

Palestinian statehood would be dependent on Palestinians taking steps for self-government, such as respect for human rights, freedom of the press and having transparent and credible institutions, the officials said.

Trump’s plan calls for Palestinians to be able to return to a future state of Palestine and creates a “generous compensation fund,” one of the officials said. About Israel retaining the settlements, a U.S. official said: “The plan is based on a principle that people should not have to move to accomplish peace … But it does stop future settlement expansion which we consider to be the most realistic approach.

Before the Trump announcement, thousands of Palestinians demonstrated in Gaza City and Israeli troops reinforced positions near a flashpoint site between the Palestinian city of Ramallah and the Jewish settlement of Beit El in the West Bank.

On Monday, Palestinian leader Abbas said he would not agree to any deal that did not secure a two-state solution. That formula, the basis for many years of frustrated international peace efforts, envisages Israel co-existing with a Palestinian state.