There’s only one thing I’m going to miss about Melbourne’s lockdown. Freedom to be bored. That sense of a vast quantity of time rolling out in front of me.

I haven’t been bored like this since I was 13 with the summer holidays stretching out seemingly interminably. 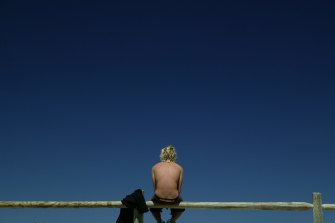 The boredom was like when as a child summer holidays seemed to last interminably.Credit:Andrew Quilty

Boredom is discomforting. You feel an urge to fix it. Fill the time in, any way possible. But in the worst of our second lockdown, Netflix palled, self-improvement activities seemed pointless. And when I put my bad-news device away in another room, I was just left with time, undiluted time. Acres of the stuff.

Busyness fell away. Neighbours on my street hoisted a beer from their yard after work. The bustle of it all, gone.

At first, my kids went spare. Swimming and gymnastics, gone. School and kinder, gone. Playdates, gone. The whole structure we’d constructed for them just disappeared. It was us and them, stuck in one house, going slightly crazy. 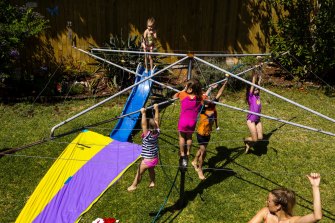 The kids had no school, no activities and no catch ups with friends so we were all going slightly crazy in the one house.Credit:Nic Walker

But then, they too settled into the new confines of what was possible. My son papered entire walls of his room with his drawings of animals and became obsessed with bird-watching. My daughter came up with elaborate running-jumping couch routines. The toddler ate dirt, taught herself to climb trees and harassed snails.

On my walks, I saw the result of this new boredom in neighbourhood kids. Wild-haired teenage siblings who threw a rope over a branch and spent their precious outside time swinging over the creek. Others turned unloved parts of parks into BMX tracks, building their jumps little by little over weeks. Adults, too. The golf course near me was temporarily turned over to the public, and people flocked to it, letting the trees soak up their time.

But now that life is resuming, there’s this natural tendency to fill the void of time. Fill it with activities, socialisation, distraction. Life is speeding up again. Weekends already clogging up with organised activities. The possibilities offered by boredom are fading. 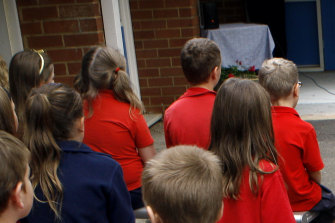 As life returns to normal we are all getting busy again.Credit:Glen McCurtayne

In 1945, a seven-year-old girl wrote in her diary: ‘I can’t keep track of all the days so maybe I shouldn’t right everyday because I have home work and music lessons and guitar lessons and Brownies and many other things.’ Her diary entry is recorded in American historian Howard Chudacoff’s history of children’s play, which traces the rise – and fall – of unstructured play.

From the second half of the 20th century, he writes, free play began to dwindle. Increasingly, parents took over, introducing our own competitive cult of busyness to our children. We protect them from risk and cultivate their futures. Extracurricular activities balloon, like a finishing school before they even start. If you don’t keep your kids busy, motivated and pointed at success – are you even parenting?

The downside, of course, is that a child becomes a wholly owned subsidiary of their parent. We direct, coax, wheedle. It’s exhausting – another job on top of all the rest. 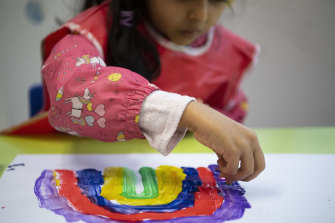 For me, lockdown was a brief detour into an alternative history. Watching my kids wrestle with that unfamiliar thing – boredom – felt almost precious. They seemed to grow like weeds, branching out this way, trying things, abandoning them, changing, combining.

It reminded me of a trip I took to a village outside Madang, in Papua New Guinea. The adults were working, while their children ran free as a laughing, curious mob. Sea-swimming, tree-climbing, game-making, teasing and running, testing themselves against the world. They had nothing formal to do but they were far from bored.

By luck, my own childhood had resembled theirs a little – a mob of neighbours, running house to house, playing down at the creek, coupled with a little benign neglect from our parents.

But with my own kids, it felt different. The world felt more competitive. Less certain. Until the ultimate uncertainty arrived, and left us all behind invisible walls in our own houses, playing a new game called The World is Lava.

In 2018, Australian parenting expert Julie Green said this of boredom: “It can really be worth parents holding their nerve when the kids complain about being bored. It shows children it isn’t the end of the world to be a bit bored and to work through it.”

So now, as all of Melbourne makes up for lost time, I’m left wondering. Were our lost months a total waste, after all? Perhaps not.

As life swirls us away into our own routines, I’m hoping to keep a little of the lockdown alive for my kids – by keeping time aside for boredom and the space it opens up.

Doug Hendrie is a Melbourne writer.