Indian forces have detained a Chinese soldier on a disputed Himalayan border where the two nations fought a deadly battle last year, the military said today.

The arrest marks the second detention on the high altitude border since their deadliest confrontation in decades broke out in June, in which at least 20 Indian soldiers were killed.

The face-off began in early May with a fierce brawl before exploding into hand-to-hand combat with clubs, stones and fists on June 15 which is also understood to have caused a number of Chinese casualties.

Both India and China have since heavily militarised each side of the Ladakh region.

It was said today that a People’s Liberation Army soldier was ‘apprehended’ on the Indian side of the area, known as the Line of Actual Control.

The Indian army said in a statement the man was detained in the early hours of Friday and taken into custody. 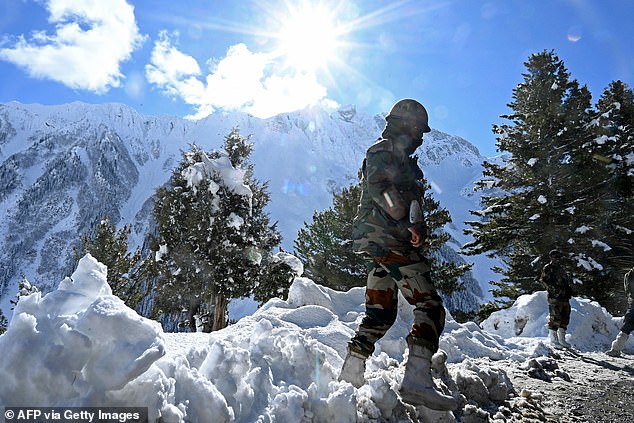 Indian army soldiers stand on a snow covered road after snowfall near Zojila mountain pass that connects Srinagar to the union territory of Ladakh, bordering China

‘The PLA soldier is being dealt with as per laid down procedures, and circumstances under which he had crossed the LAC are being investigated,’ a statement said.

The People’s Liberation Army Daily, which is run by China’s military, said the soldier went missing in ‘the darkness and complicated terrain’ and insisted India was informed.

‘India should strictly abide by the relevant agreements between the two countries, and promptly transfer the missing person to China, to help with cooling and de-escalating the China-Indian border situation,’ the military newspaper added.

Another Chinese soldier was briefly held by Indian forces in the same region in October.

Tensions flared between China and India last June when a clash along the disputed Himalayan border led to the death of at least 20 Indian soldiers.

In the following months, the nuclear-armed neighbours deployed tens of thousands of soldiers across India’s Ladakh region and China’s Tibetan plateau. 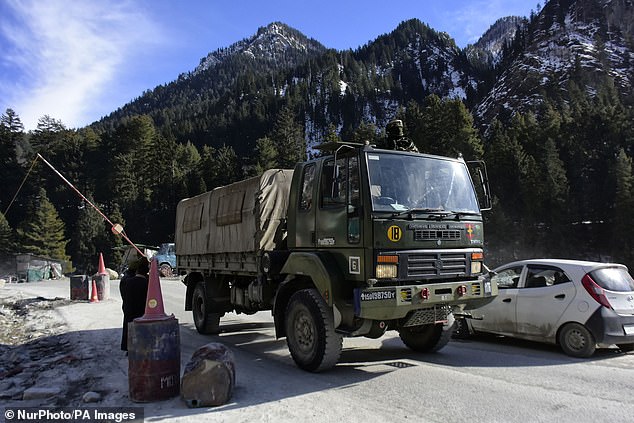 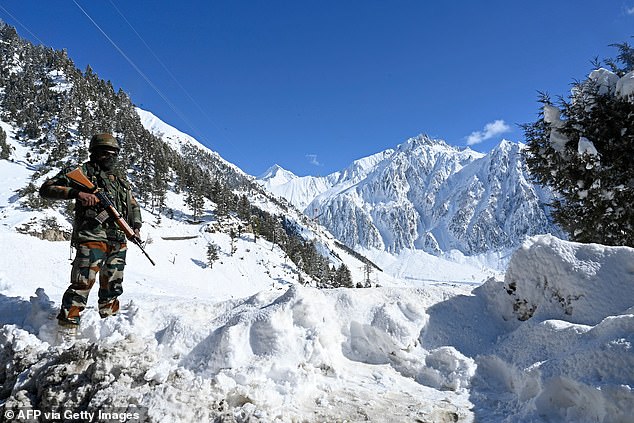 An Indian army soldier stands on a snow covered road after snowfall near Zojila mountain pass that connects Srinagar to the union territory of Ladakh, bordering China

India and China inherited their territorial disputes from the period of British colonial rule.

Three years after India’s independence in 1947 and a year after the communists came to power in China, the new government in Beijing began strongly asserting its claims and repudiating earlier treaties it says were signed under duress, but which India says are fixed.

Beijing’s approach has strengthened under Xi Jinping, China’s most powerful leader in decades who has sworn not to surrender even an inch of territory.

In the 1950s, China started building a strategic road on the uninhabited Aksai Chin Plateau to connect its restive regions of Tibet and Xinjiang.

India objected and claimed Aksai Chin as part of Ladakh, itself belonging to the former principality of Kashmir now divided between India and Pakistan.

Relations were further strained after India allowed Tibet’s spiritual leader, the Dalai Lama, to establish a self-declared government-in-exile in the northern Indian town of Dharmsala after he fled his homeland in 1959 during an abortive uprising against Chinese rule.

The differences led to a bitter monthlong war in 1962. Firefights broke out again in 1967 and 1975, leading to more deaths on both sides.

They’ve since adopted protocols, including an agreement not to use firearms, but those protocols have fractured in this year’s clashes.

China, in the meantime, began cementing its relations with India’s archrival Pakistan and backing it on the issue of Kashmir.

The fiercely contested LAC separates Chinese and Indian held territories from Ladakh in the west to India’s eastern state of Arunachal Pradesh, which China claims in its entirety. It is broken in parts where the Himalayan nations of Nepal and Bhutan border China.

According to India, the de facto border is 3,488 kilometers (2,167-mile) long, although China promotes a considerably shorter figure.

As its name suggests, it divides the areas of physical control rather than territorial claims.

In all, China claims some 90,000 square kilometers (35,000 square miles) of territory in India’s northeast, including Arunachal Pradesh with its mainly Buddhist population.

India says China occupies 38,000 square kilometers (15,000 square miles) of its territory in the Aksai Chin Plateau, which India considers part of Ladakh, where the current face-off is happening.