OFFICIALS are searching a suspect's home and trying to identify the gunman who allegedly killed eight and then himself.

The shooter pulled the weapon out of his trunk and started shooting for up to two minutes during a FedEx night shift change, witnesses claimed. 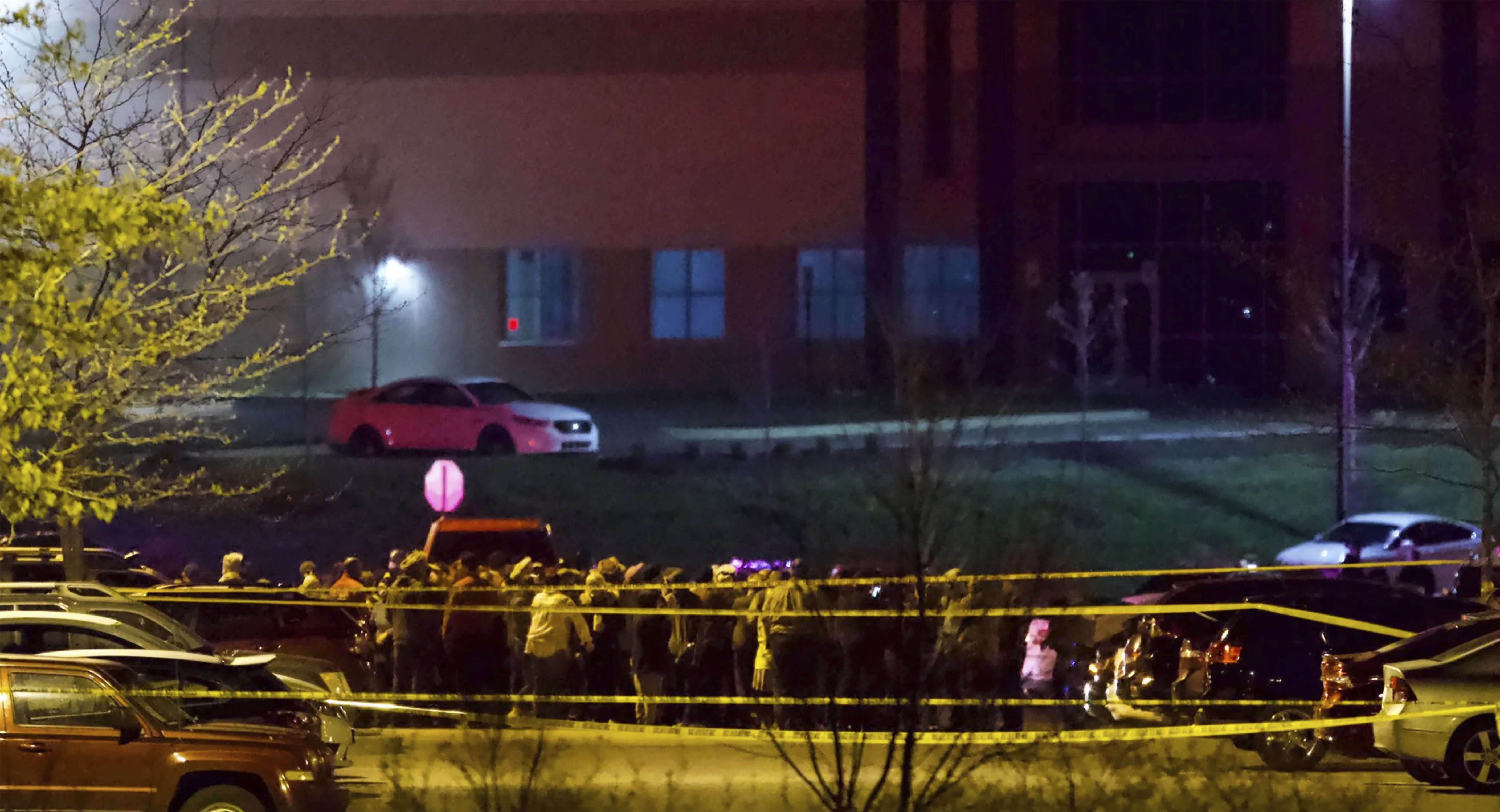 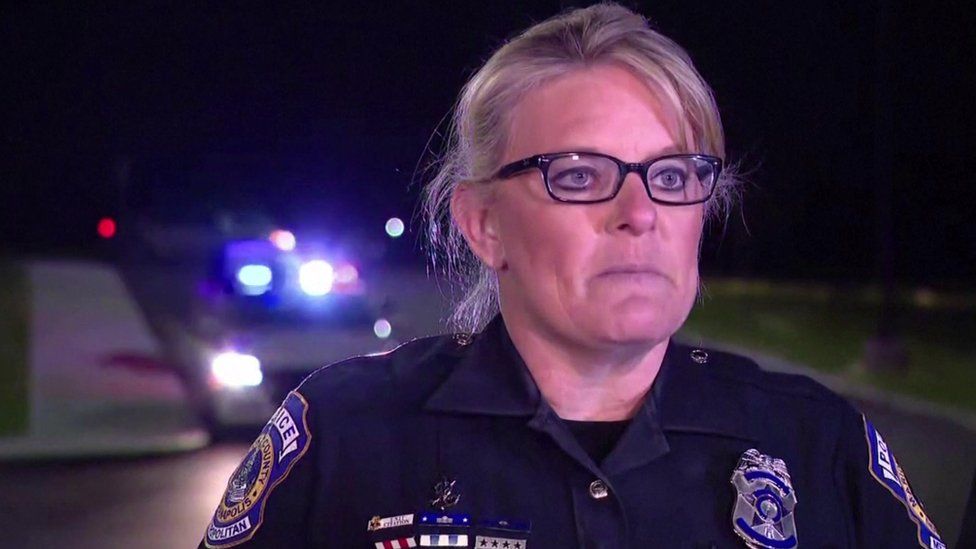 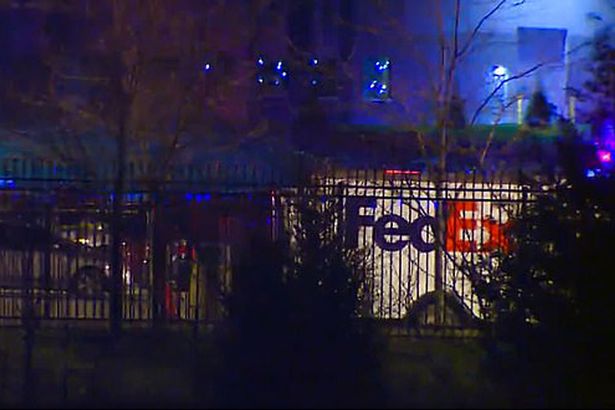 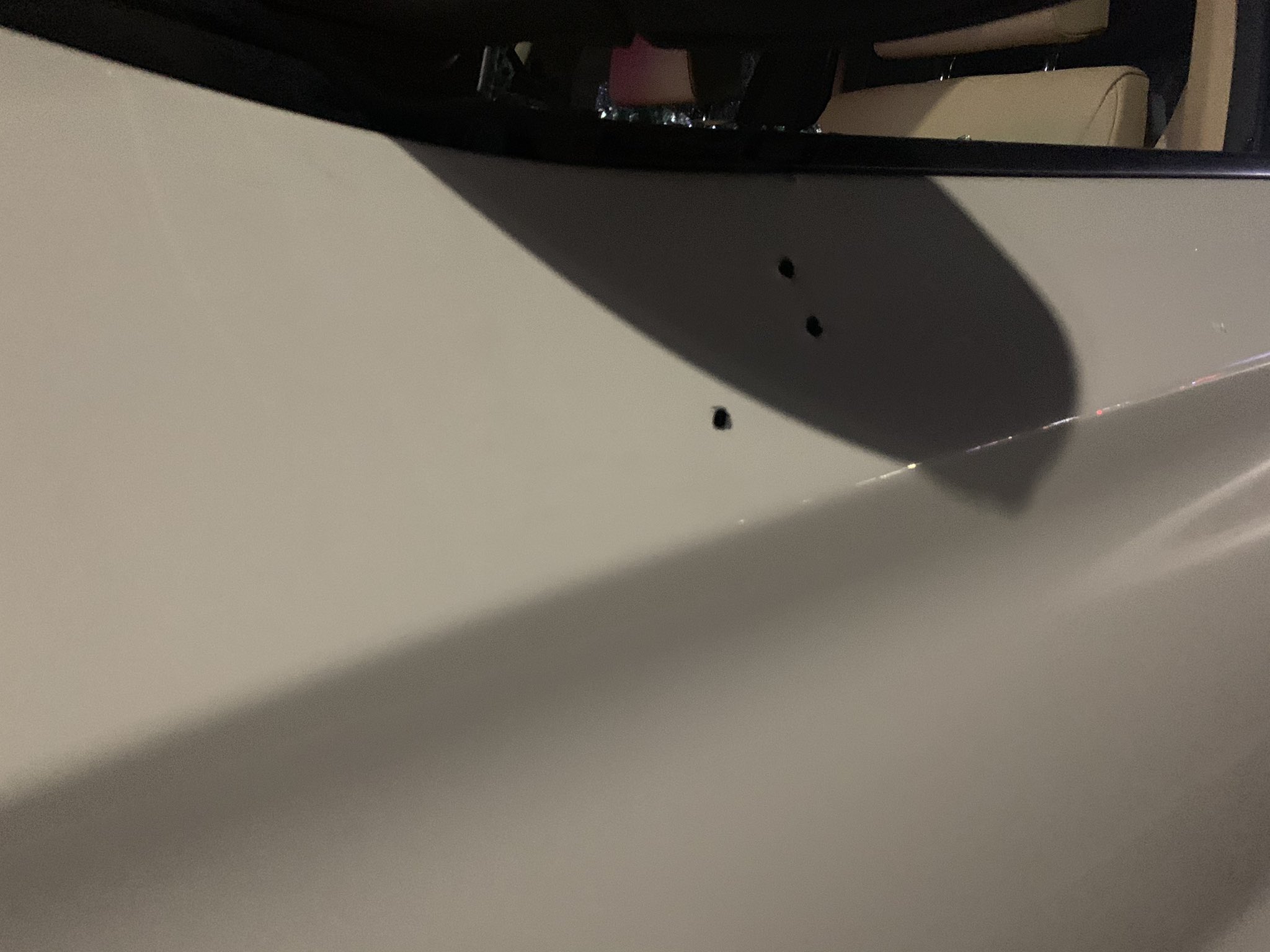 Employee Levi Miller told the Today show that his friend saw a man trying to thwart the shooter.

"My friend at the time witnessed a man who was not part of the incident but also pulled out a gun from his truck to try and engage the shooter and he died because of it," Miller said.

Miller claimed that the gunman was a "well-known worker," however this has not yet been confirmed by police.

Victims were heard screaming for their lives as the lone gunman wreaked havoc with a hail of bullets last night. 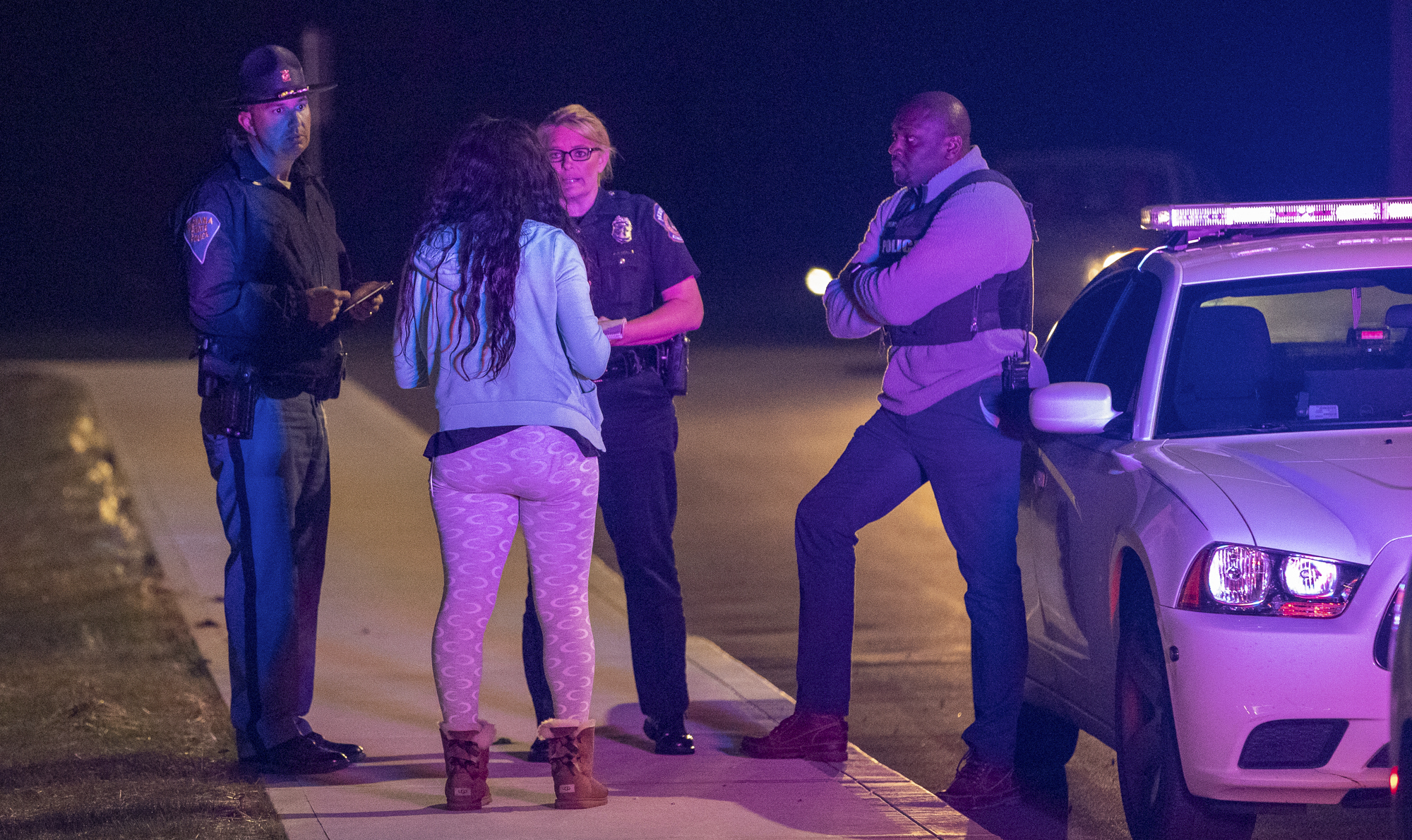 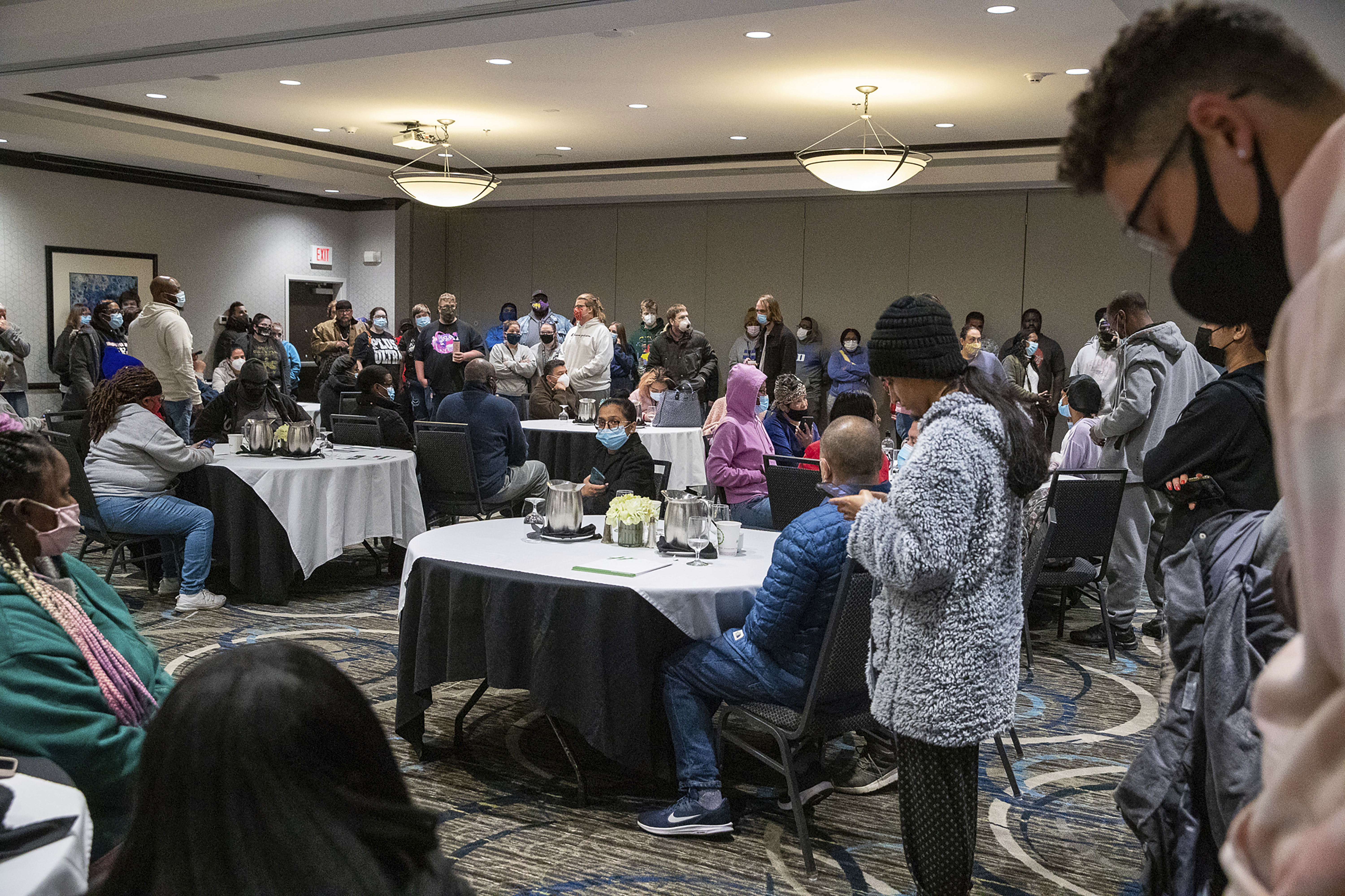 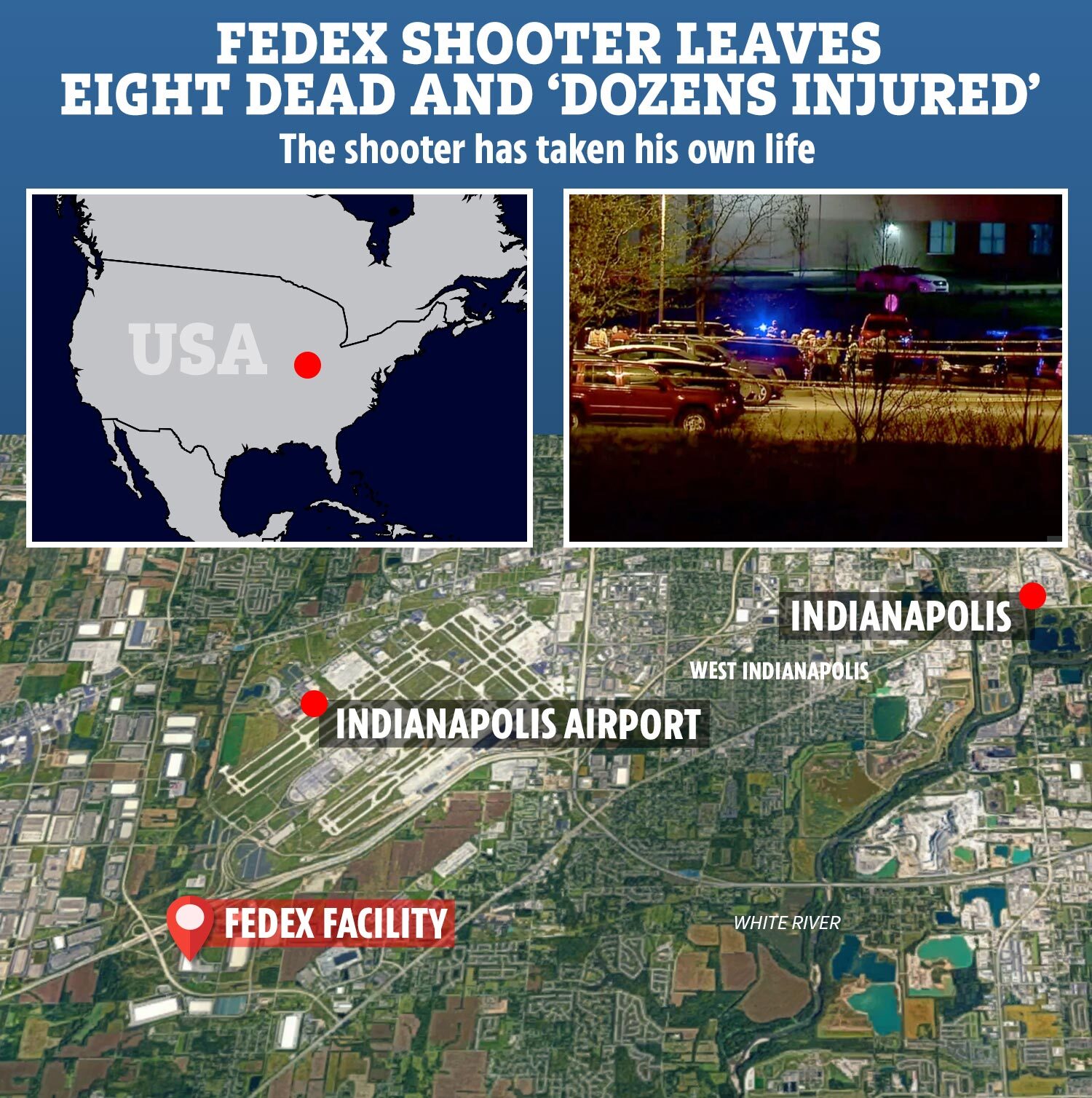 Cops were met with a scene of horror as they searched the warehouse for survivors with bloody bodies strewn across the floor.

It is believed at least five were injured in the massacre with at least one person fighting for their life in a critical condition.

Officers were called to the "active shooter incident" at 11pm last night after reports of shots being fired at the FedEx site on Mirabel Road in Indianapolis.

"After a preliminary search we have located eight people at the scene with injuries with gunshot wounds," Indianapolis police spokesperson Genae Cook told reporters this morning.

"Those eight were pronounced deceased at the scene."

Four victims were found outside of the building and five, including the suspect, were inside, police confirmed.

It was confirmed this morning that the shooting only lasted for one to two minutes.

In police dispatch audio initially published by Heavy, the suspect was described as a "white male wearing a hat" or hoodie and carrying a rifle type weapon.

The suspect was found dead after shooting himself in the head about 10 to 15 minutes after cops were first called to the bloodbath.

Cops later confirmed the suspect had a .223 rifle, according to the audio.

At least one rifle was confirmed, with police looking into reports of a second weapon.

However, according to the initial dispatcher call, police believed there were two rifles.

"We have the suspect here inside it looks like. Looks like he has a gunshot wound to the head. Two rifles here," an officer said in the audio. 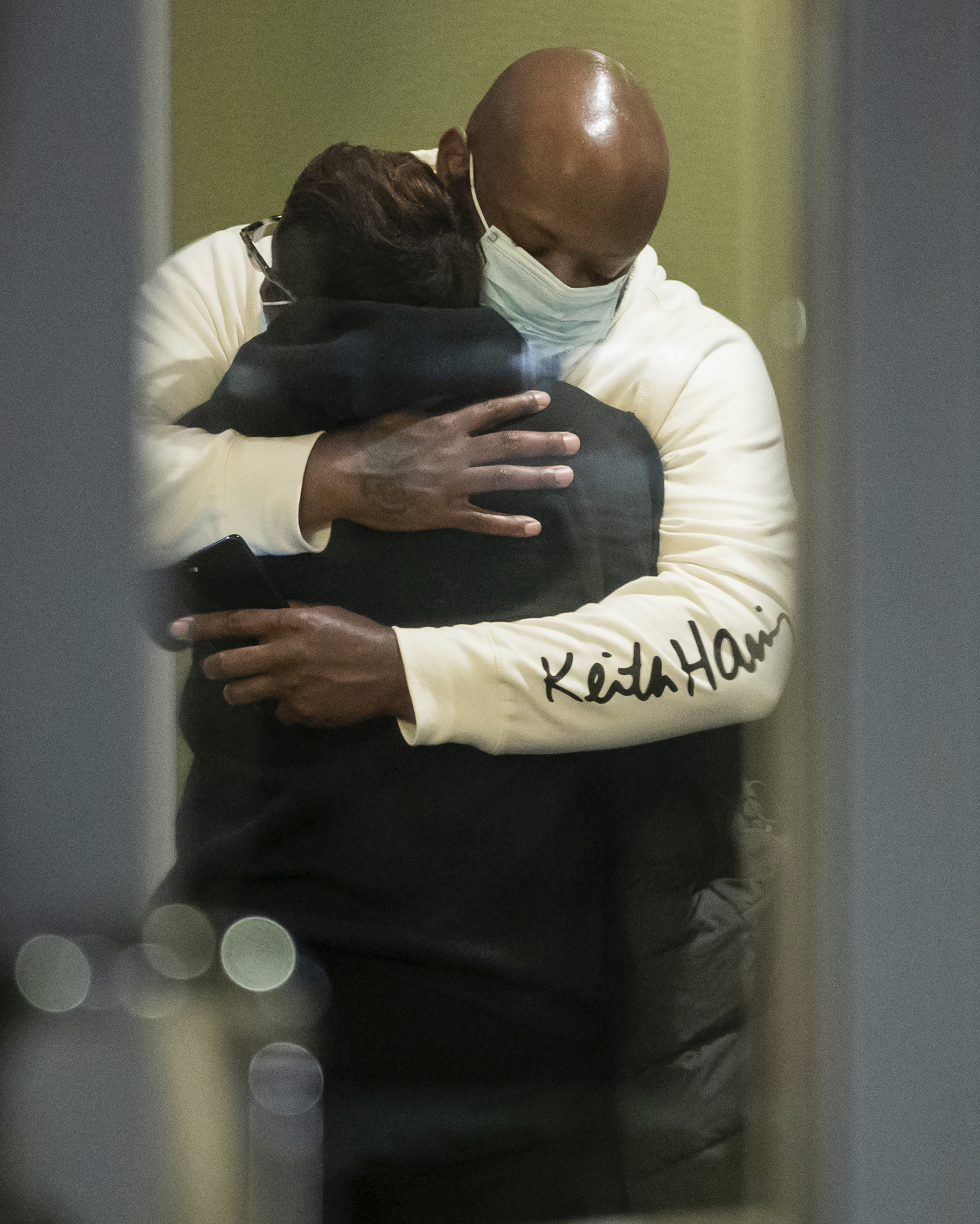 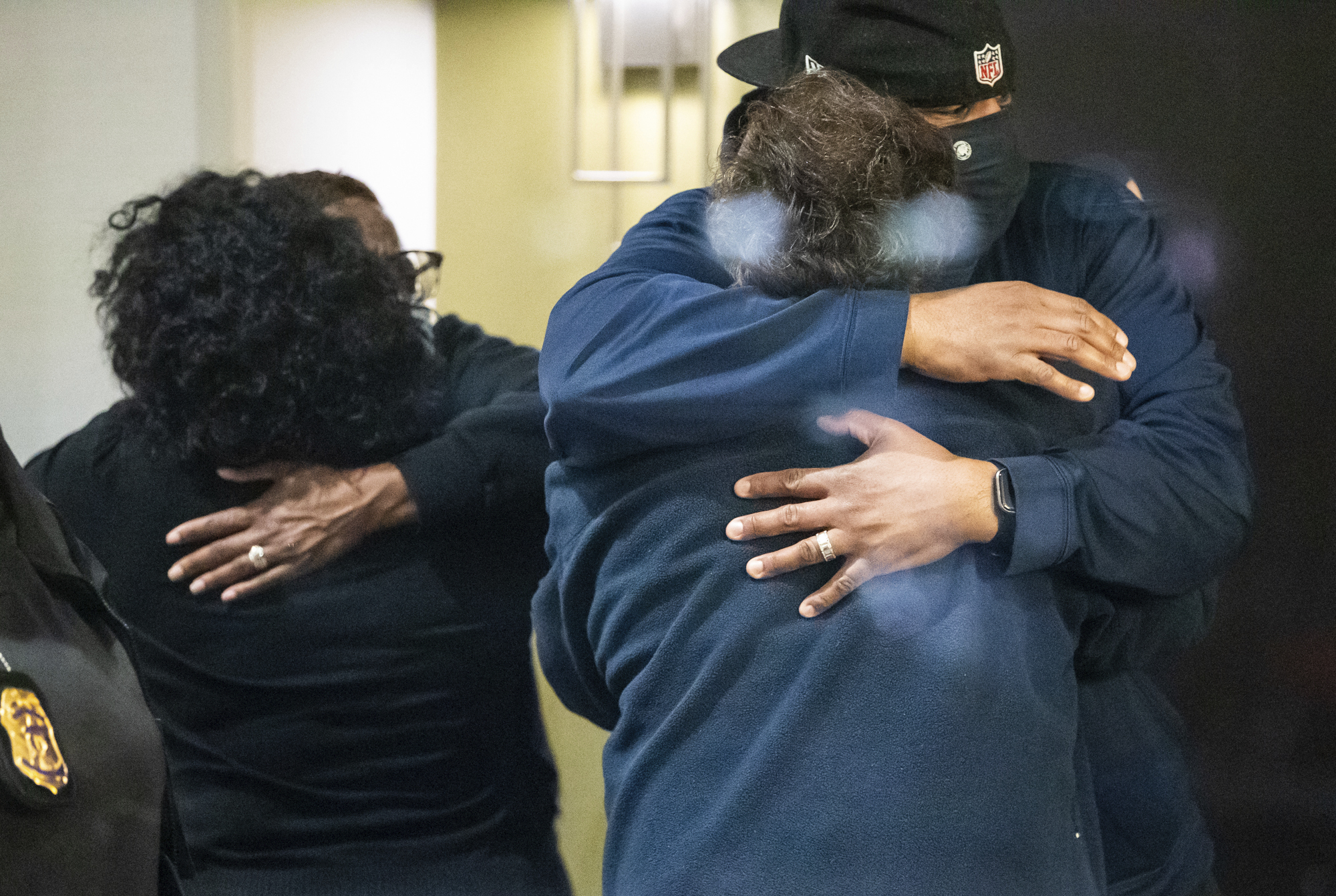 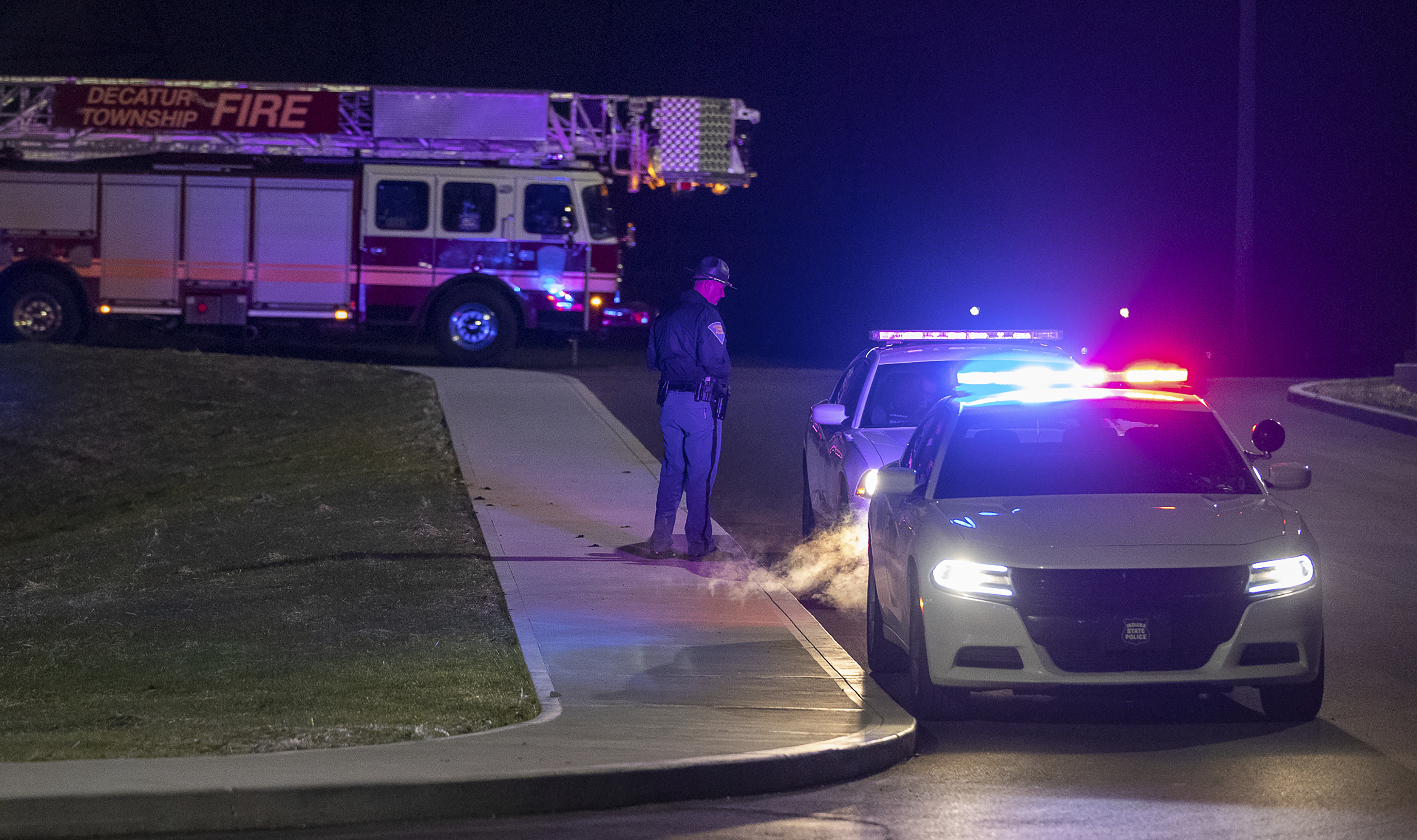 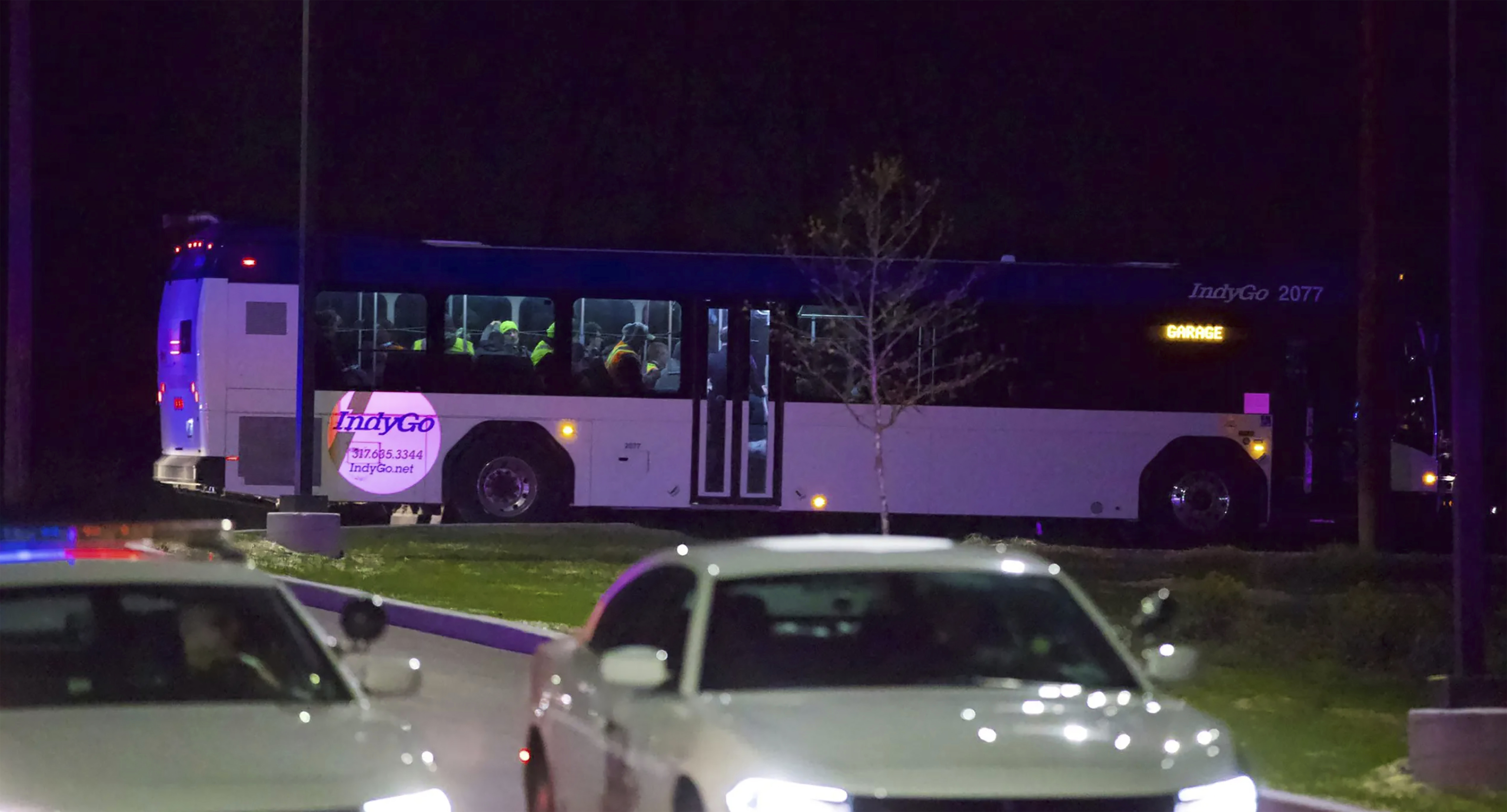 One witness said that he was unable to see the shooter's face in detail, but claimed he was holding an AR and started shouting before six shots were fired "rapidly."

During a press conference on Friday, Special Agent Paul Keenan confirmed that officers were searching the suspect's home.

White House officials said that President Biden will be briefed today on the shooting.

Governor Eric Holcomb confirmed that the flags will be lowered to half-staff until sunset on Tuesday.

Police spokesperson Cook said: "Today it is very heartbreaking and, you know, in the Annapolis Metro Police Department, the officers responded, they came in, they went in and they did their job.

"And a lot of them are trying to face this because this is a sight that no one should ever have to see."

No officers were injured in the shooting, Cook confirmed.

She said officers are still working to identify the shooter, adding: "This is going to go long into the morning."

She said it was too early to tell whether the shooter was a FedEx employee.

"We're still trying to ascertain the exact reason and cause for this incident," Cook said.

FedEx released a statement following the mass shooting this morning: "We are deeply shocked and saddened by the loss of our team members following the tragic shooting at our FedEx Ground facility in Indianapolis.

"Our most heartfelt sympathies are with all those affected by this senseless act of violence.

"The safety of our team members is our top priority, and we are fully cooperating with investigating authorities."

US Congressman Andre Carson, a representative for Indiana, said: "I am heartbroken by the mass shooting at the FedEx facility here in Indianapolis and praying for all affected by this tragedy.

"I am communicating with local authorities to get all details of the attack and my office stands ready to help everyone affected in any way we can." 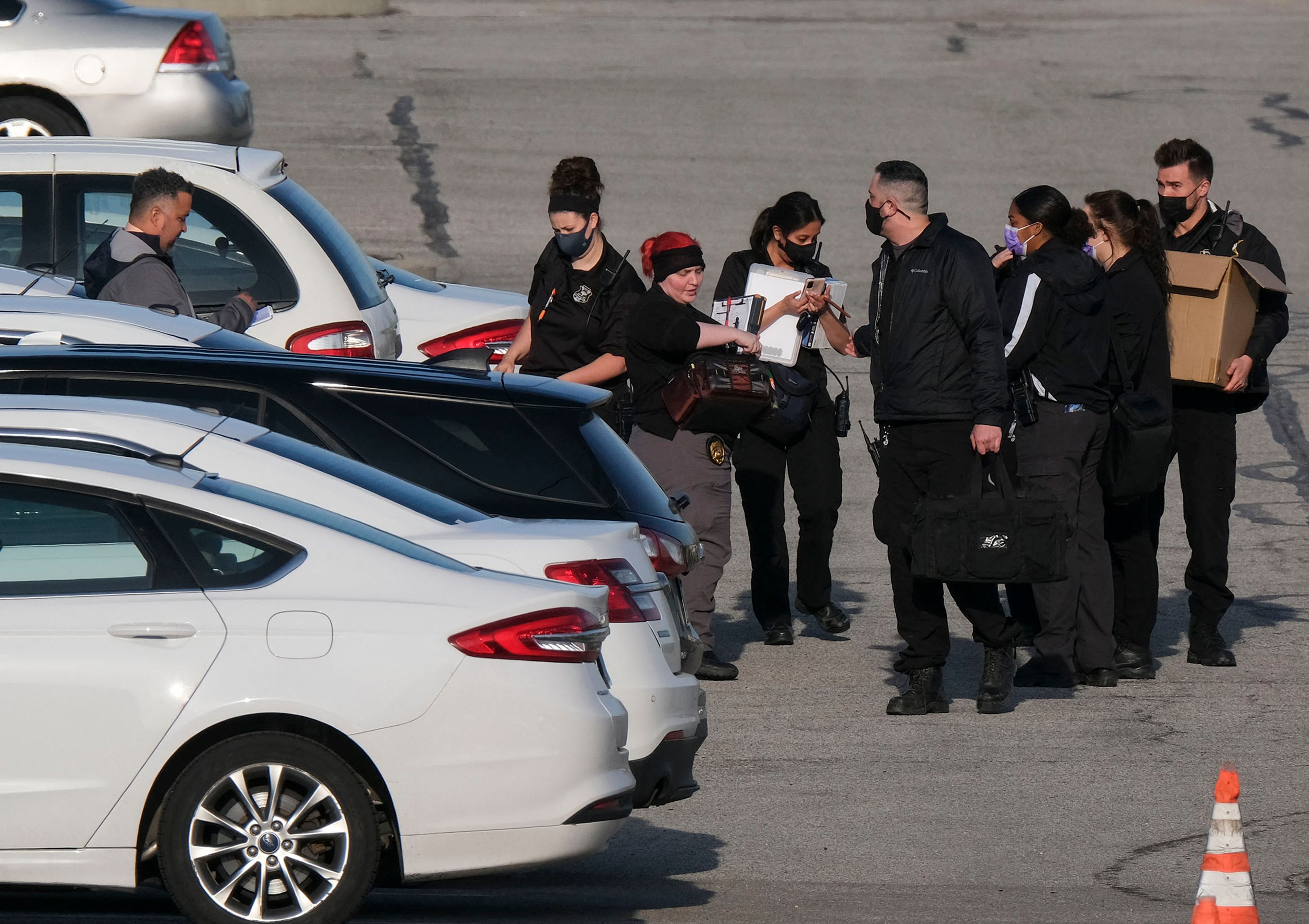 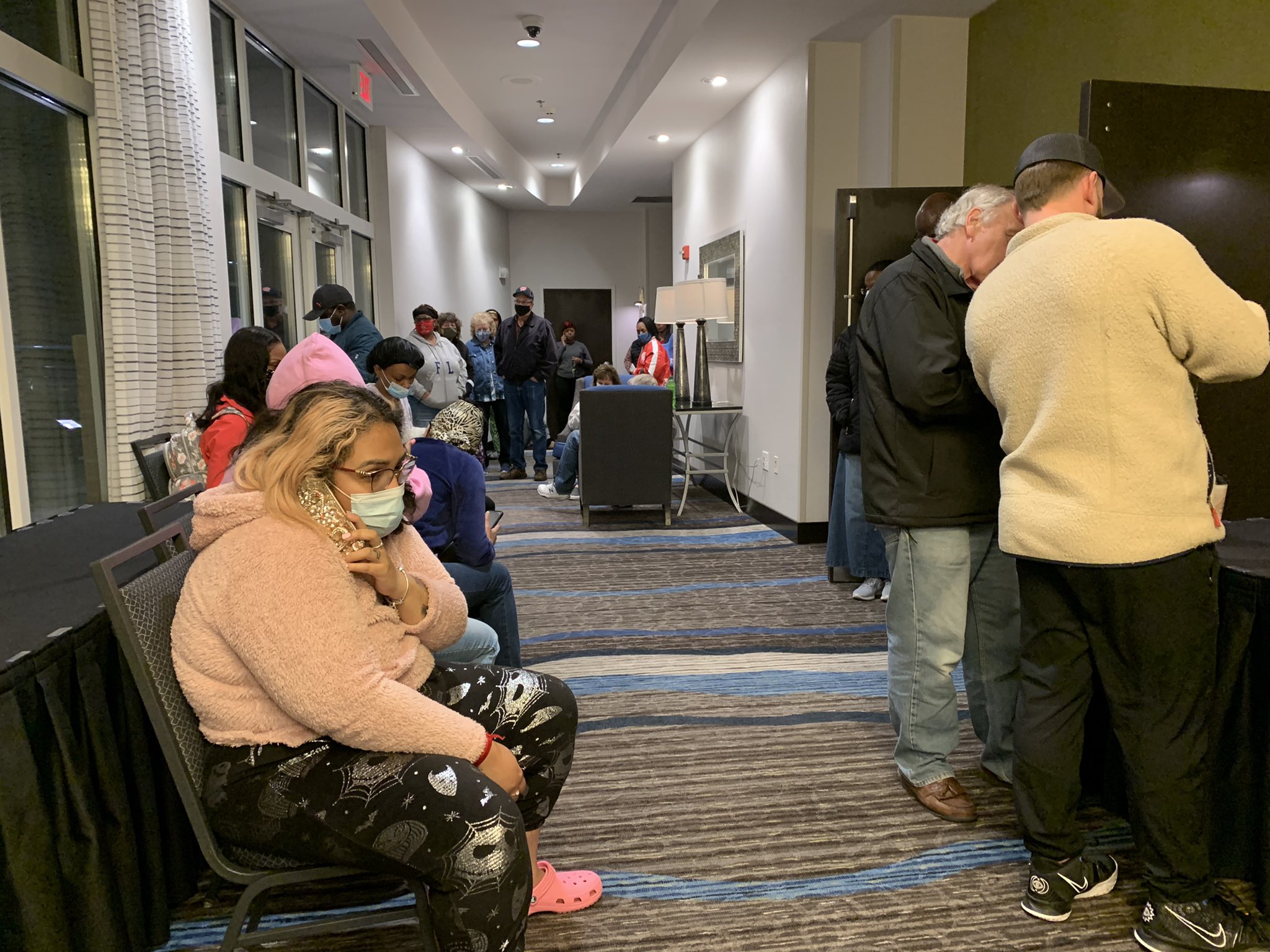 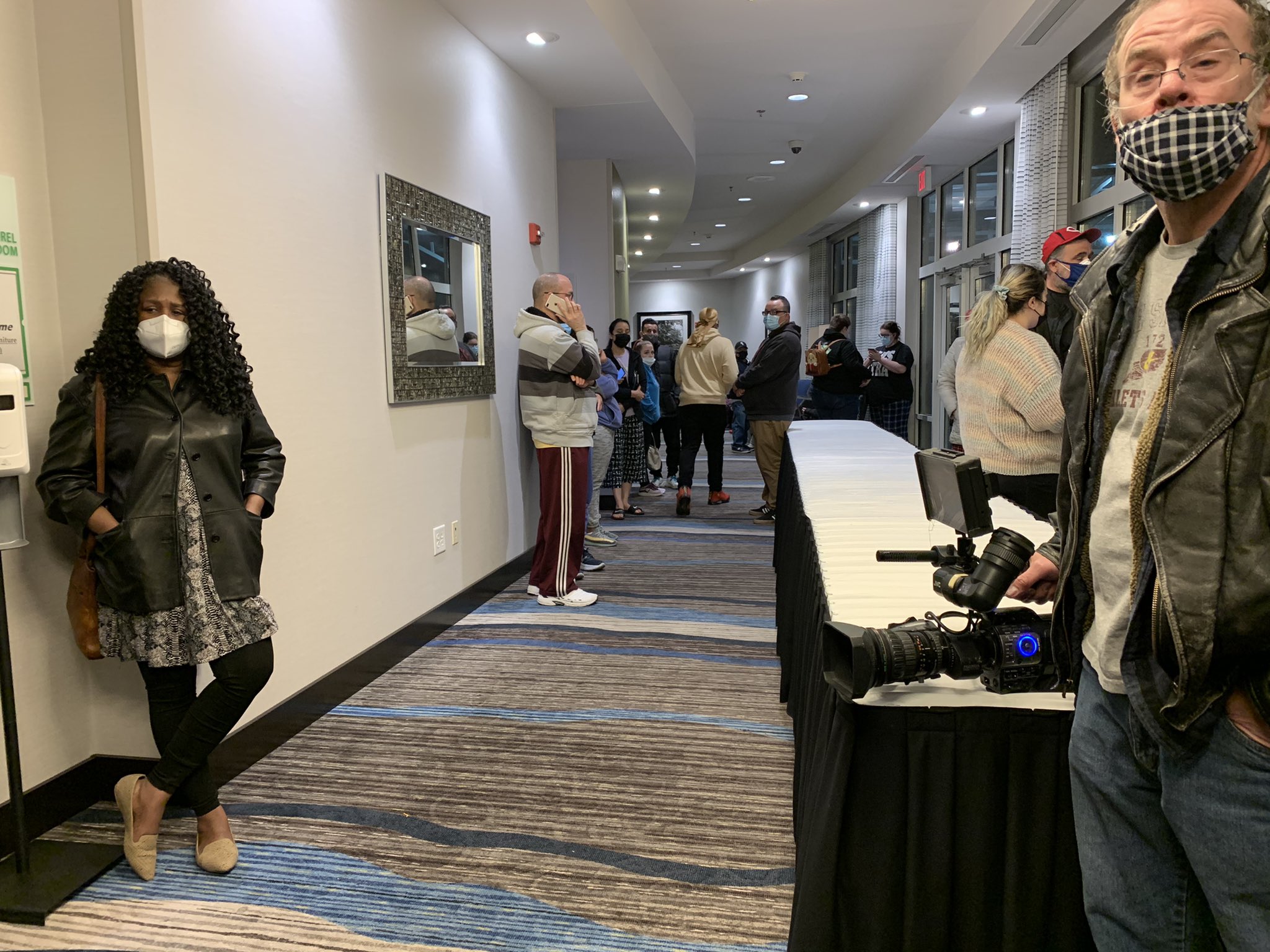 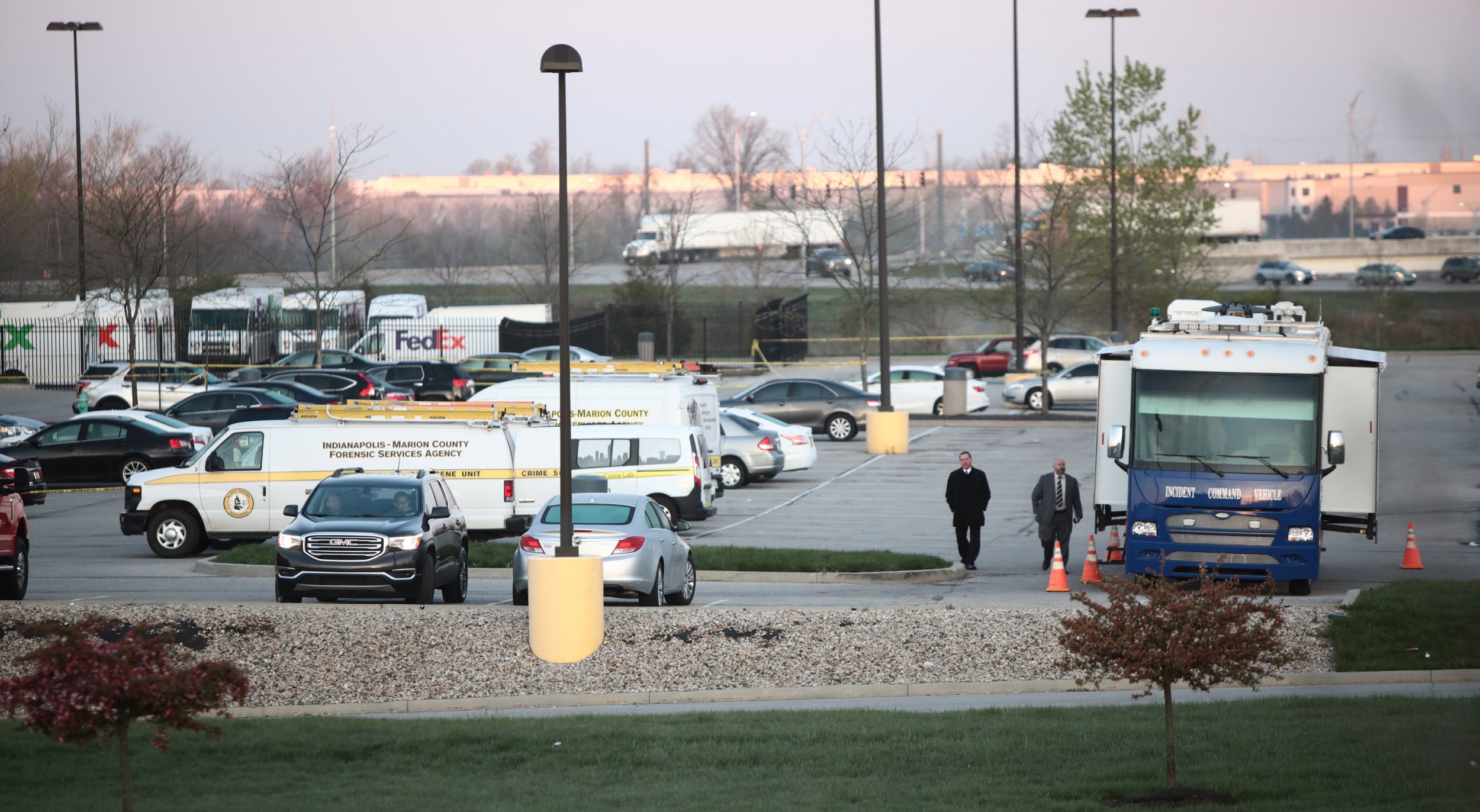 Terrified victims revealed how the crazed gunman sent bullets flying into parked cars while FedEx workers said they were forced to dive beneath conveyor belts to hide.

Employee Jeremiah Miller was within feet of the attacker inside the building.

He told WISH: "I saw a man with a submachine gun of some sort, an automatic rifle, and he was firing in the open.

"I immediately ducked down and got scared and my friend's mother, she came in and told us to get inside the car."

"They didn't sound like gunshots at first. Then we heard three more shots.

"And then my buddy Levi saw somebody running out of the building and then more shots went off," he added.

"Somebody went behind their car to the trunk and got another gun, and then I saw another body on the floor."

Ian Johnson, whose wife works at the building, told WTTV that she messaged him to say that there was an active shooter at the facility.

"She texted me to tell me there's an active shooter and we communicated back and forth for a while. She's since notified me she's OK," he said.

"After I communicated with her for a while, then it went silent for a while, so I came here just to see what was going on and she texted me I'm OK."

Live video from news outlets at the scene showed crime scene tape in the parking lot outside the building. 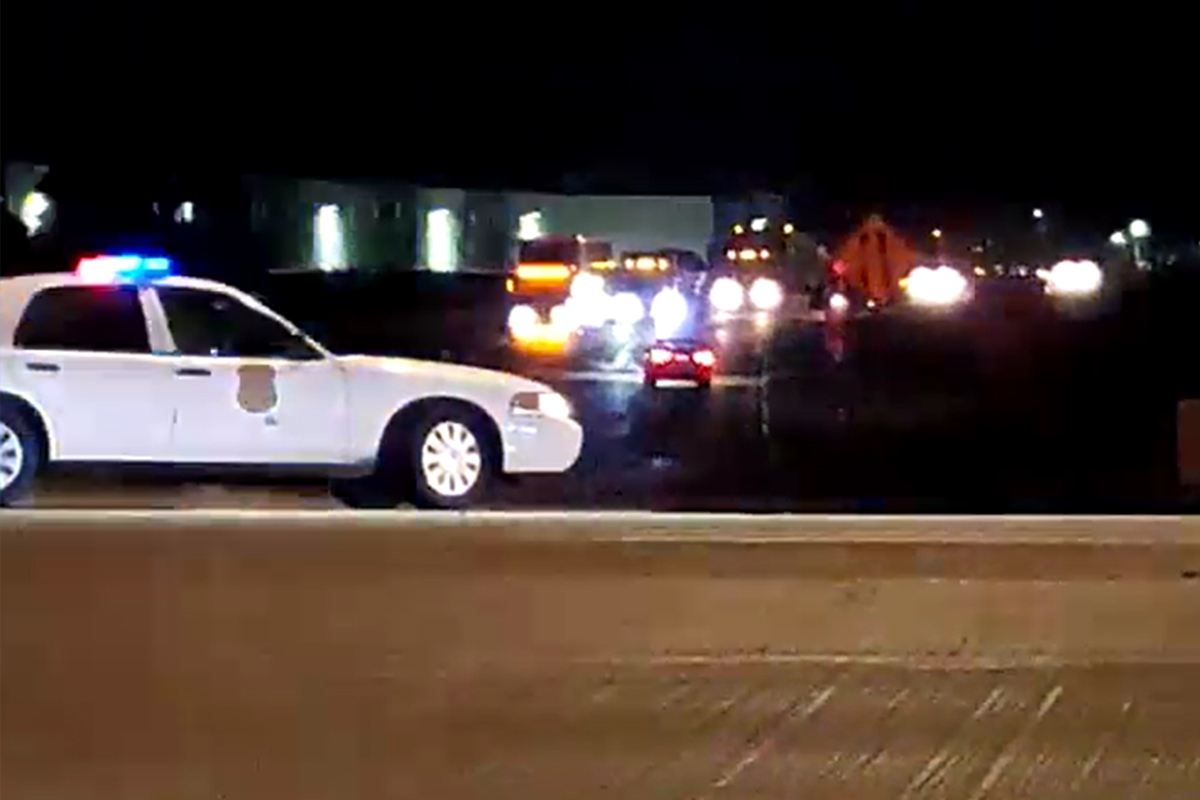 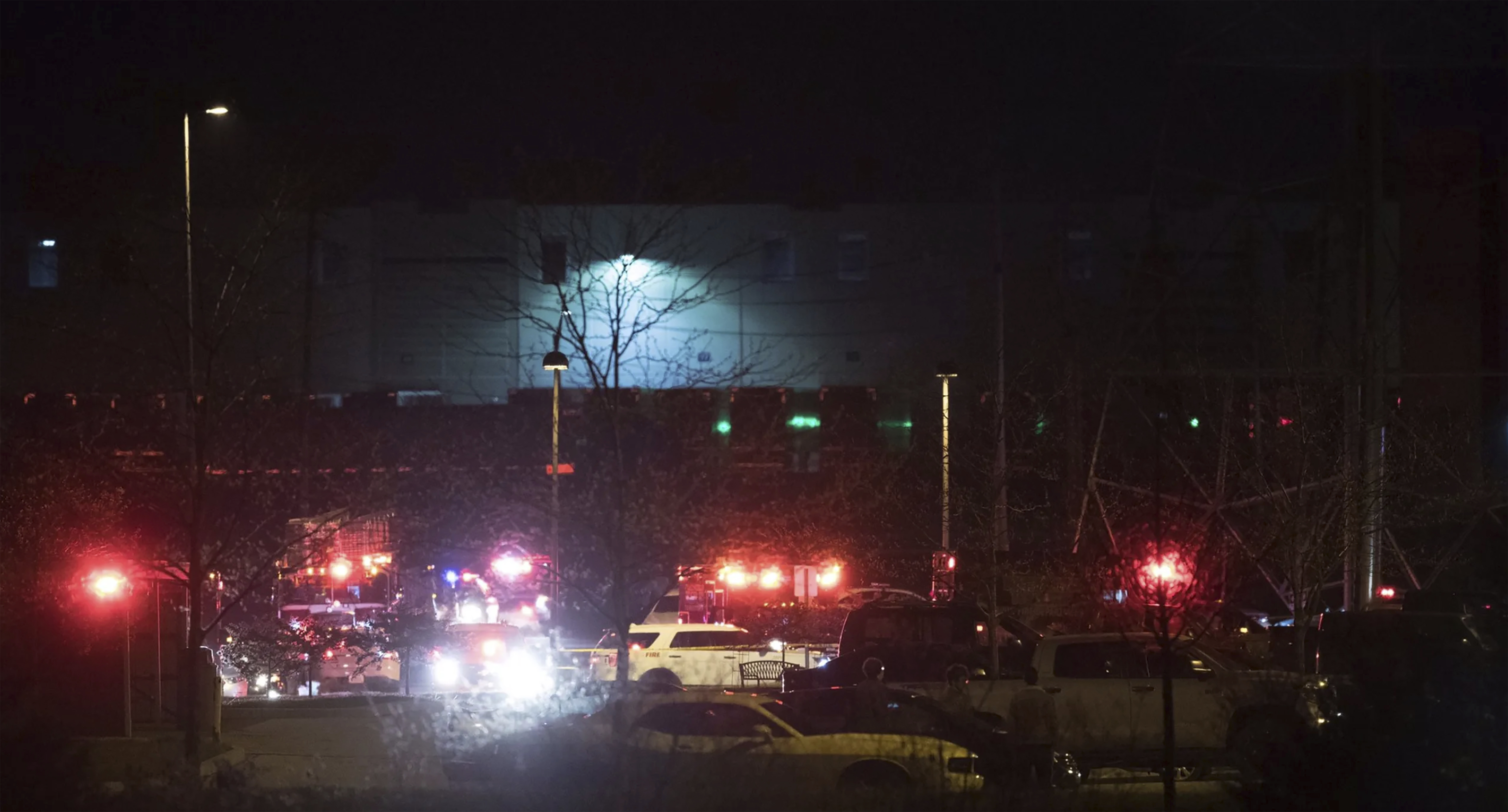 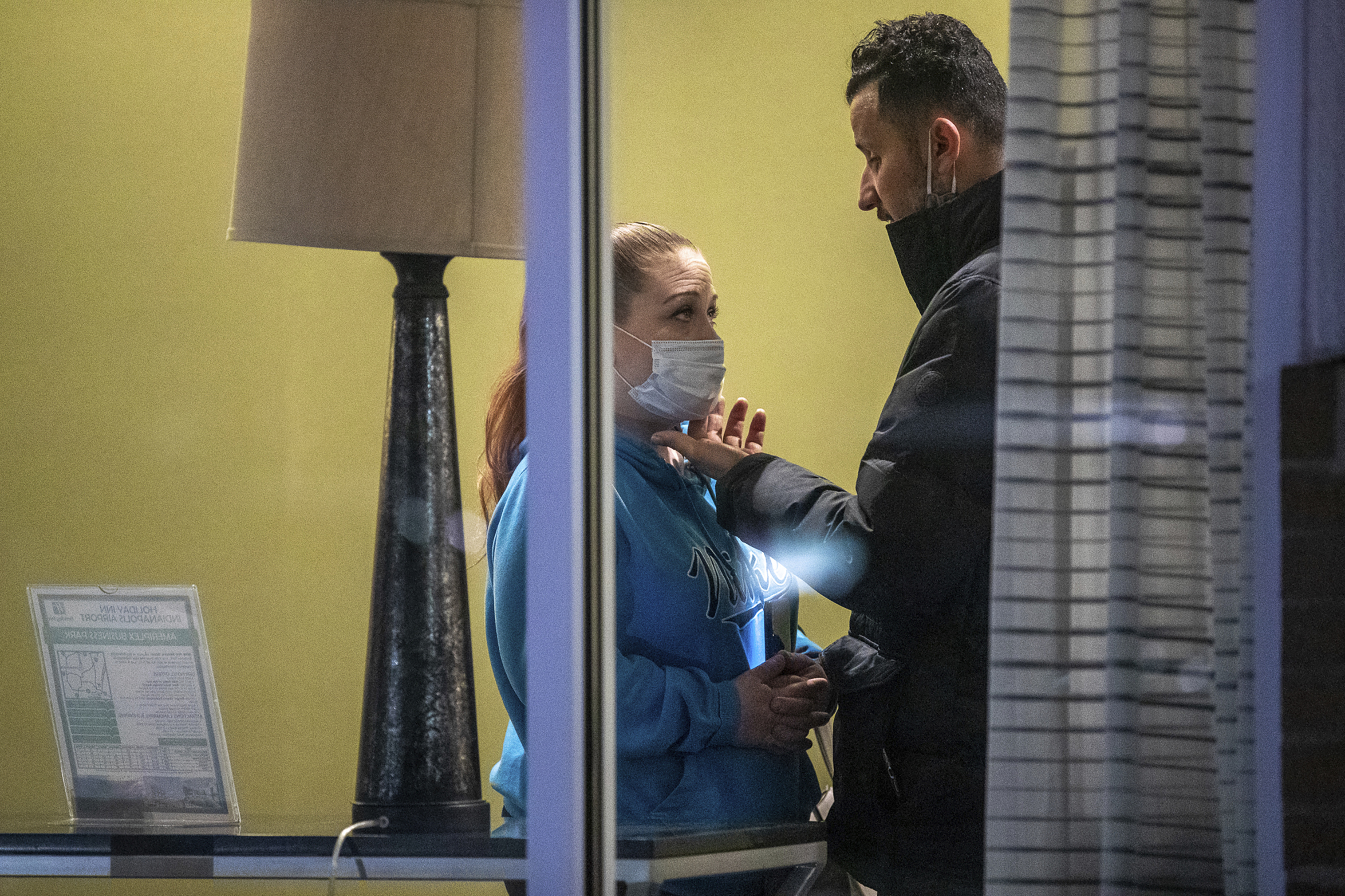 The Deputy Chief confirmed that the suspect "came into the parking lot, exited his vehicle and quickly began shooting."

It was also confirmed that "it wasn't precipitated by an argument or disturbance."

One victim's uncle, Parminder Singh, told WTTV his niece had been sitting in her car when she was shot in the upper left arm and she was recovering in hospital.

The FedEx facility employs more than 4,500 people – it is the company's second largest hub in the world.

Families of employees who may have been affected were told to go to a nearby Holiday Inn Express where police would be on hand to offer assistance last night.

At 2.45am on Friday, about 110 people were anxiously waiting for news at the hotel, the New York Times reports.

Christina Valor said her sister, Natalie, worked at the facility and had not been in touch.

"We’re hoping for the best," she told the newspaper. "But we don’t know anything."

According to WISH, FedEx employees were meeting with family members to help them find workers and the American Red Cross was providing snacks and drinks. 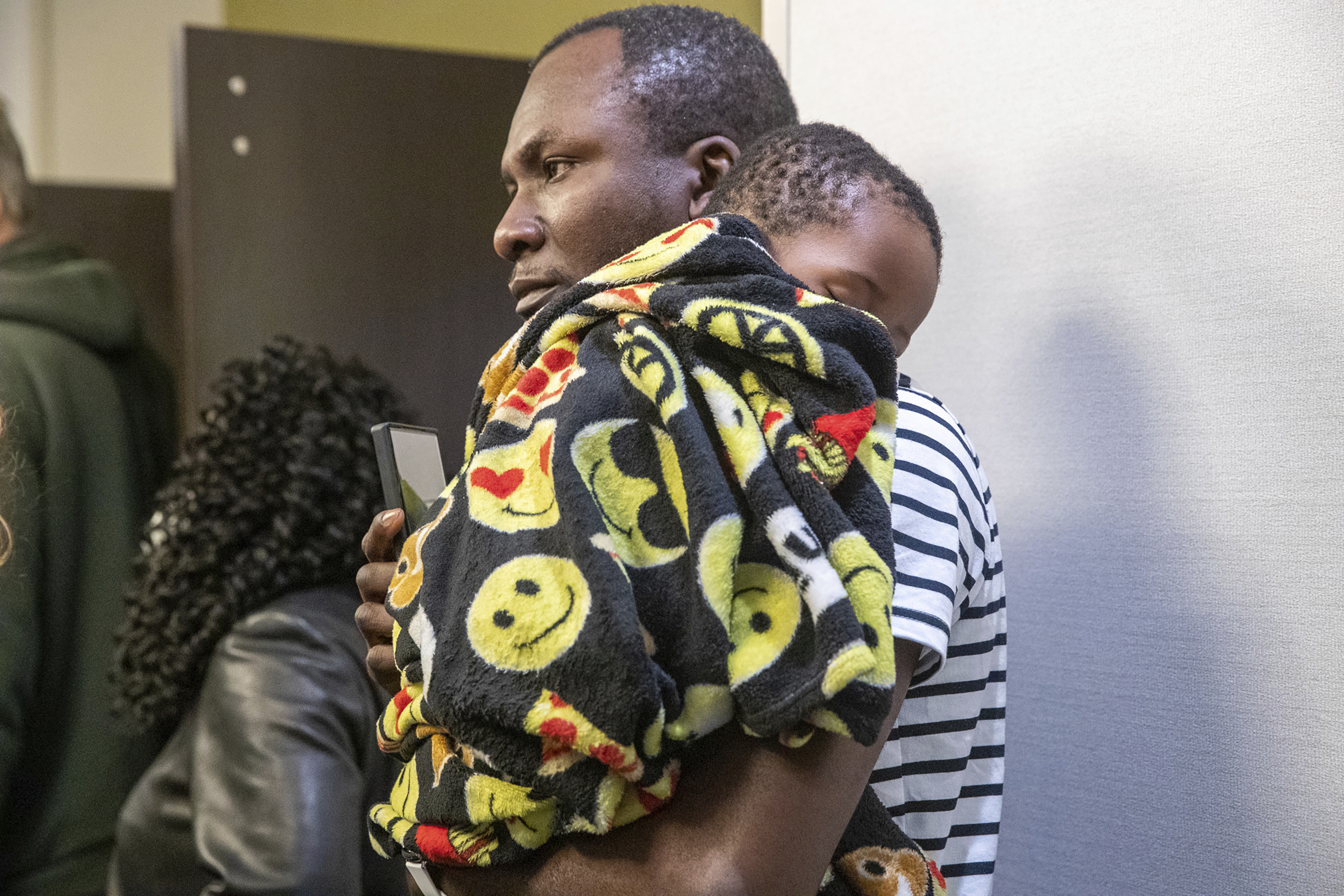 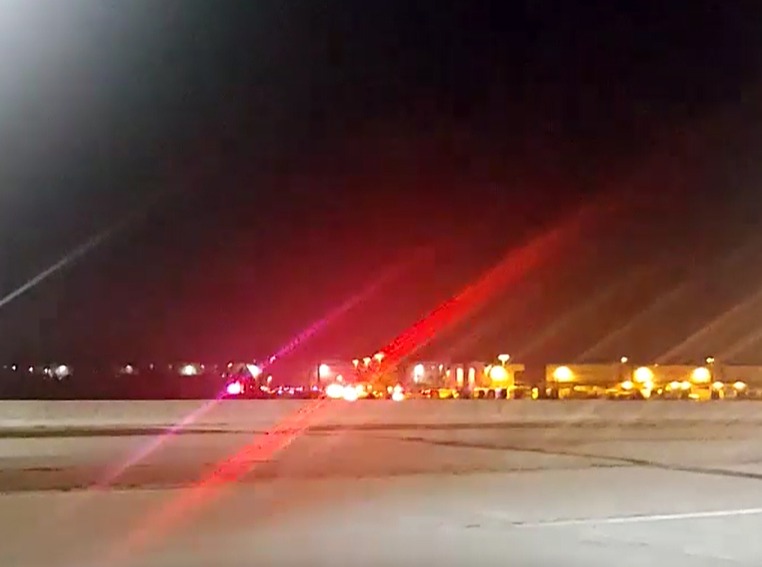 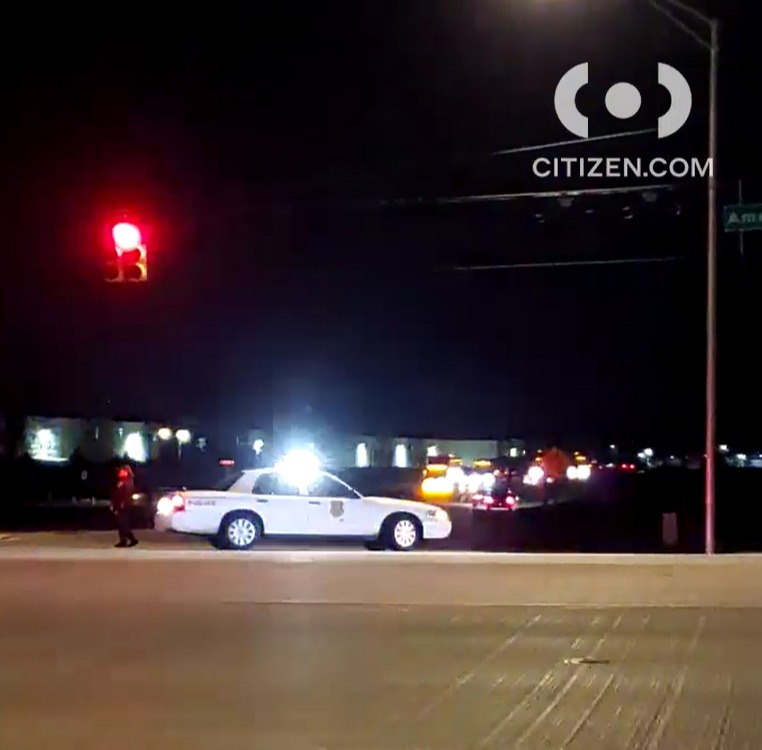 A FedEx spokesperson said: "We are aware of the tragic shooting at our FedEx Ground facility near the Indianapolis airport.

"Safety is our top priority, and our thoughts are with all those who are affected.

"We are working to gather more information and are cooperating with investigating authorities."

An Indiana State Police Public Information Officer tweeted that the Interstate 70 highway – off which the FedEx facility is located – had reopened without access to Ameriplex Parkway from either direction.

According to dispatches heard by WISH-TV, the scene was declared as a "mass casualty Level 1" area.

Emergency responders rushed to the scene to provide support and footage showed a myriad of cop cars with officers' guns pointed at the facility.

At least two ambulances were dispatched to the scene by the Decatur Township Fire Department.

As of Friday morning, the FBI has begun assisting the police and emergency services.

This is the third mass shooting this year in Indianapolis.

Five people, including a pregnant woman, were shot and killed in January, and a man was accused of killing three adults and a child before abducting his daughter during at argument at a home in March.

And the shooting was the latest in a string of mass shootings across the United States in recent months.

Eight people were fatally shot at massage businesses across metro Atlanta, and ten died in gunfire at a supermarket in Boulder, Colorado last month.