Pintupi artist Patrick Tjungurrayi left behind a formidable to-do list when he died in 2017 of kidney failure.

To continue work that began 21 years ago when an auction at the Art Gallery of NSW raised $1 million from the sale of Central Desert works to launch Aboriginal health service Purple House, he listed tiny communities that still needed dialysis units to keep elders with renal failure alive and on country.

It was too late for him, but a new and small exhibition called Purple House at the Art Gallery of NSW until next February and a fundraising appeal may see his final wish come true. 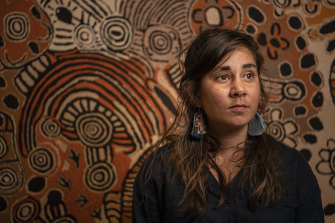 A new exhibition will open at the Art Gallery of NSW, curated by Coby Edgar and called The Purple House. Artwork by Marrapinti, Umari, Tjintjintjin. Credit:Wolter Peeters

Sitting with Purple House’s chief executive Sarah Brown before he died, Tjungurrayi urged her to put dialysis units in Balgo, Nyirripi and Ernabella.

Since then, a dialysis unit in Ernabella, population 412, in South Australia is open, says Purple House.

Planning is in progress for Nyirripi, population 236 and 440 kilometres north of Uluru.

As for dialysis in Tjungurrayi’s hometown of Balgo, population 358, in the Tanami desert in Western Australia, that will be determined by the success of the new Balgo Purple House appeal.

Coby Edgar, the AGNSW’s curator of Aboriginal and Torres Strait Islander art, describes the Purple House exhibition as a celebration of what the Aboriginal-led organisation had achieved and the generosity of the Pintupi and Luritja peoples.

“From wanting just one dialysis unit then, they now service 18 communities. They were told in the early days, ‘don’t even try to get a dialysis unit out to a place with no good water’,” she said.

Purple House also operates two buses providing mobile dialysis. It has been a long slog, though. Ms Brown remembers the early days when she took just enough salary to pay the mortgage. 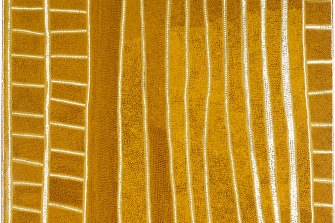 For years, she lobbied federal, state or territory governments to fund dialysis for end-stage renal failure on country because it was cheaper, more effective and humane than in hospitals located in big cities and towns.

In 2018, she succeeded after showing how it could be done, and the Medicare Benefits Schedule added a new item. “Number 13105,” Ms Brown repeats, the number tripping off her tongue like an elixir.

“That means if you do dialysis in a really remote community, with the help of a nurse or an Aboriginal health work, you get money from Medicare.”

Kidney disease is three times as high in remote communities as in the rest of Australia.

“By getting people back out to community on dialysis, they get to pass on their cultural knowledge, strengthen the next generation and help their communities have a vision for the future.”

“Everyone says this project is about keeping our spirit alive and strong,“Ms Brown said.

The new exhibition includes three large collaborative works that were painted for the first show.

“Doing major collaborative pieces is hard work, getting everyone organised to see who is going to paint which sites,” said Ms Edgar.

Eleven men painted one and nine painted the other. And it was hard to see where one artist picked up and another stopped, she said. “They’re quite gorgeous, amazing pieces, and large and significant works for that time.”

Like Tjungurrayi, many of the artists who painted the collaborative works have since died of renal failure. Many were also shareholders of Papunya Tula, a company and art gallery owned and directed by traditional Aboriginal people from the Western Desert, predominantly of the Luritja/Pintupi language groups.

Ms Edgar writes that Pintupi artist Morris Gibson Tjapaltjarri sped around his community on his mobility scooter with his 13 dogs following. Despite being on dialysis for 10 years, “he was always up for a laugh. He died on country, wearing his favourite t-shirt that read ‘Can’t lose’.”

Bobby West Tjupurrula, a director of Purple House, was famous for cooking feral cat on the open fire. “He made patients, staff and visitors pussycat sandwiches for lunch. Before you ask… it tastes a bit like lamb.”