Inflation rises from 0.4% to 0.7% in March after surge in fuel and clothing prices

The UK’s rate of inflation hit 0.7 per cent in March after rises in fuel and clothing costs.

The CPI measure was up from 0.4 per cent in February, although it remains well below the Bank of England’s 2 per cent target.

Inflation had unexpectedly the previous month, in part because of the biggest annual fall in clothing and footwear costs since 2009.

There was less discounting in March, according to the Office for National Statistics, but it was still higher than normal for the season.

‘However, food prices fell back on the year, as prices of some staples were lower than at the start of the pandemic.’ 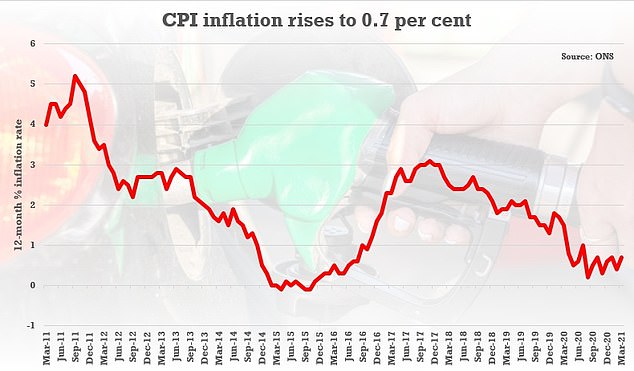 The CPI measure was up from 0.4 per cent in February, although it remains well below the Bank of England’s target

The CPI reading in January was 0.7 per cent.

Inflation is expected to increase this year, as the UK and other countries around the world emerge from the pandemic.

Bank of England forecasts have inflation reaching around 2% by the end of 2021.

A consensus of analysts supplied by Pantheon Macroeconomics was that CPI would rise to 0.8 per cent in March.

Pantheon’s chief UK economist, Samuel Tombs, believes that CPI will reach the Bank’s 2 per cent target rate as early as May.

‘Looking ahead, CPI inflation looks set to jump to about 1.7 per cent in April, driven primarily by a large semi-annual increase in electricity and natural gas prices, as well as the anniversary of the collapse in oil prices at the start of the pandemic,’ he said.

‘April’s data also will be collected after shops reopened and hospitality businesses resumed outdoor service, so the inflation rates for clothing and food service activities probably will both rise.’

The ONS said that CPIH, an inflation measure that includes housing costs for owner-occupiers, rose from 0.7 per cent in February to 1 per cent in March.