BAGHDAD  — Iraqi security forces have killed a senior commander of the Islamic State group, the prime minister said on Thursday, a week after the rare, twin suicide bombing by IS militants killed dozens in Baghdad.

The Islamic State group had quickly claimed responsibility for the Jan. 21 blasts at a busy open-air market in the Iraqi capital. At least 32 people were killed and more than 100 were wounded.

The country’s security forces have faced mounting pressure after the Jan. 21 attack in central Baghdad, with many saying the attack — the first to strike the Iraqi capital by the militant group in three years — was a failure of Iraq’s intelligence.

“I gave my word to pursue the Daesh terrorists, we gave them a thundering response,” al-Kadhimi said, referring to IS by its Arabic acronym. 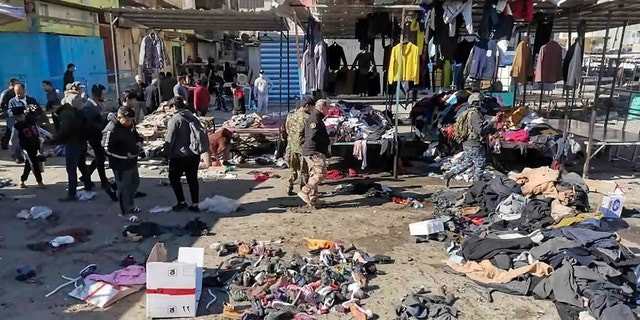 <br>
People and security forces gather at the site of a deadly bomb attack in a market selling used clothes, in Baghdad, Iraq, Jan. 21, 2021. (Associated Press)

Al-Issawi, born Jabbar al-Issawi, was killed in an operation west of the city of Kirkuk where IS militants are known to still have a presence. The operation was lead by Iraq’s elite Counter-Terrorism Service, in cooperation with Iraqi intelligence. Iraqi forces clashed with IS militants and al-Issawi was killed in the firefight, the counter-terrorism agency said on its Facebook page.

The Baghdad attack also came as the U.S.-led coalition forges ahead with plans to withdraw troops from the country. U.S. troops have gradually withdrawn from bases across Iraq to consolidate in Baghdad and the Ain al-Asad airbase in Anbar.

However, Iraq remains heavily reliant on U.S. weaponry and surveillance technology and expertise to root out IS presence across the country’s north and the vast western desert.