Is budget swagger justified? We’ll have to wait to find out

Just over a week after the federal budget, the Victorian government has offered its own take on how to revive the battered economy. Considering the divergent political leanings of the two governments, their approach is surprisingly similar.

Both budgets delivered a big-spending headline driven by royal commissions: the federal government is shovelling billions into aged care as Victoria ramps up spending on mental health. Both budgets accept that government must lead the way in stimulating growth, and that racking up substantial debt in that endeavour makes sense. But there is one clear divergence. 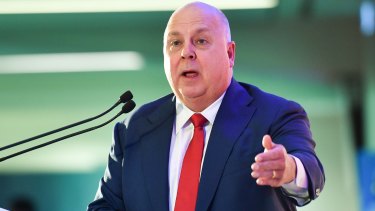 The dominance of Labor in Victoria means attacks on its big spending and taxing ways will be brushed aside – after all, big spending is hardly ideological these days, and it is in Victorian Labor’s bones to improve public services, which also can have an economic pay-off. The party has never been ashamed of government spending.

Mr Pallas should be given credit for offering a path back to surplus by 2023. He boasted that if the economy was roaring back to life in Australia, it is this state that provides the “tiger in the tank”, with economic growth to be 6.5 per cent next year, outstripping the rest of the country.

He is less optimistic about employment. In Victoria’s view, unemployment over the next four years will bottom out at 5.25 per cent, a figure higher than federal Treasurer Josh Frydenberg is targeting.

There are factors that will continue to drag on Victoria’s economy. International students are not expected to start trickling back until the middle of next year and overseas migration is not expected to reach pre-pandemic levels until mid-2025. The influx of people into the state had long been one of its most substantial drivers of economic growth.

There is a long way to go before we will have seen the back of this crisis. The substantial investments in social housing, education, mental health, transport, infrastructure and the like are welcomed and will hopefully have a long-term social as well as economic pay-off. But the headwinds are there, the fragility of our economy is clear. There was an element of swagger in this Victorian budget. We won’t know for some years whether it was justified.

The Age’s editor Gay Alcorn writes an exclusive newsletter for subscribers on the week’s most important stories and issues. Sign up here to receive it every Friday.