Is Trump leaving hospital a masterstroke or fatal miscalculation?

London: US President Donald Trump may be out of the hospital, but as his doctor cautiously pointed out, he is not out of the woods. A four-day recovery time for coronavirus would be, frankly, astonishing.

Boris Johnson was in hospital for 16 days, and needed several weeks to recover afterwards. It could be that the President's infection was less severe than the British Prime Minister's. But being given oxygen, remdesivir and dexamethasone is highly unusual for a mild case. All three suggest that at one point his condition was looking fairly serious. 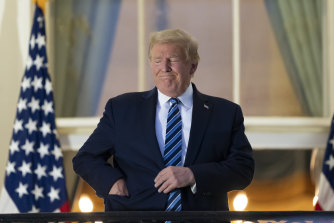 US President Donald Trump puts his mask in his pocket as he stands on the Blue Room Balcony at the WHite House after leaving hospital.Credit:AP

Trump was flown to hospital after developing a fever and fatigue. For a President so obsessed with the "optics" it is unlikely he would have been persuaded to leave the White House had his condition been mild.

Even with mild cases, the average time for recovery for a man of his age is around two weeks. Antibodies to the virus will not kick in for another few days — they normally emerge after about a week — so he is still very vulnerable to his conditioning deteriorating.

There is also the risk he could pick up a greater viral load now he is back in the White House, where increasing numbers of infections are emerging.

The main concern is if antibodies do not build sufficiently, coronavirus can become much more serious. This tends to happen about seven to 10 days into the infection and the transformation can be sudden.

As the body ramps up the immune system to try to fight off the viral replication, the lungs become inflamed and breathing grows difficult. This immune storm can start to wreak long-term damage on the body's organs. At that point, intensive care is usually required, and even ventilation if the patient is unable to breathe for themselves, at which point they will be placed in an induced coma. The coming weekend will be crucial in determining if Trump really has beaten the virus.

There is also growing evidence that COVID-19 patients can end up with organ damage from the disease and should be monitored in the long term.

Men especially have been found to have heart pumping problems, which could be particularly dangerous for the President, given that he is believed to be suffering from heart disease.

Doctors also recommend that anyone testing positive for COVID-19 should have no contact with others until two negative tests have been recorded at least 24 hours apart. Trump is still positive, and is almost certain to be shedding the virus.

So far from being out of the woods, the President may be putting himself and those around him at risk by leaving hospital so soon. Only time will tell if the decision proves a political masterstroke, or a fatal miscalculation.

Sarah Knapton is science editor at the London Telegraph.