It should be a time for celebrating, but …

As we say in Melbourne, that was quite a week. Most of the time, most of the stories we publish are straightforward. There’s an announcement that needs context or analysis. There’s an issue that needs further exploration as to how it will affect people. There’s a court case or a report that needs summarising in a way that highlights the most important elements. There are events that need reviewing or celebrating.

But sometimes, what is happening is so fast moving and fraught that the responsibility to cover it fairly without avoiding the complexity makes the stakes high. This has been one of those weeks.

After such long months of lockdown, it is understandable that there is division in our community, a high level of emotion and disquiet, even as we start to lead fairly normal lives.

We can pat ourselves on the back for such outstanding vaccination rates, which have made the easing of restrictions possible. We can dance! We can have a wedding with as many guests as we like! If you want a party for 100 people, go for it! I went out to restaurants for dinner twice this week!

These are everyday things, but they have been restricted for so long that we seem to be emerging blinking hard, not quite sure of ourselves. It’s a relief that small businesses can crank up again, that perhaps our city won’t look so dead soon, and that our children – thank goodness – are at school where they belong.

Just as we emerge, the government’s proposed pandemic laws and the resultant protests have brought into focus that there are deep scars from this pandemic, that “moving on” will be longer and harder than we had hoped.

The right to protest is fundamental in a democracy and those held in September – banned under public health orders at the time – were suppressed by police in a way that made some Melburnians uneasy. Others were furious at the protesters’ irresponsibility. Some of us felt both things at once, and that’s what made the story challenging to cover.

There was an ugly, violent aspect to them, including heart-breaking scenes at the Shrine of Remembrance, but there was also frustration at the cost of the lockdowns on some members of our community – the pandemic was never an equal playing field – and a resistance to vaccination mandates.

At The Age, we discuss these issues all the time, and there are different views. Our position has been to support vaccine mandates for certain industries – health care and education, for instance – but to question any blanket mandate and query their necessity once vaccination rates are at 90 per cent for those eligible. We are sceptical that it is feasible or proportionate to lock out the unvaccinated from normal life forever.

Many of our readers will disagree with this position, and have good reasons for doing so, but there is no doubt that this is a legitimate debate. At The Age, all staff must be vaccinated and the vast majority of staff agree with that – I have not received a single complaint.

The protests over the state government’s proposed pandemic laws have been disturbing. There is little doubt, in our view, that the laws had serious flaws that reflected an overreach by the government, even though they have many laudable aspects, including greater transparency about health advice.

As columnist Jon Faine wrote, the government has handled this badly. Instead of consulting to get this important law right, it “curtailed debate, crunched the numbers and piled pressure on the crossbench independents in the upper house to fix their mess”.

The balance between civil liberties and public health is a difficult one, but after such long lockdowns with such severe restrictions of civil liberties, many Victorians are wary for good reasons.

Now that protests are thankfully legal again, there is nothing wrong with demonstrations against these laws, and against vaccine mandates. Protests are rarely subtle, and some of the claims are hyperbolic and ill-informed. They include a grab bag of complaints, from reasoned concerns about the proposed laws, a general mistrust of governments to nonsense about the evils of vaccines. However, it would be wrong to dismiss them as irrelevant fringe concerns. 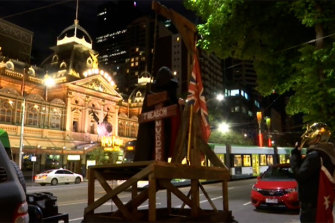 Gallows spotted at a rally against the pandemic laws on Monday.

During the past week, there has been a growing menace to these protests. The gallows and nooses became a symbol of something that had gone beyond legitimate protest towards a threat of violence that has no place in Melbourne. The fear – and it is a reasonable fear – is that ugly words turn into actual violence, against our elected representatives and members of the public.

We have reported this week of the infiltration of protests by far-right extremist groups seeking to organise, recruit and radicalise protesters. Counter-terrorism officials have charged a Victorian man who allegedly encouraged anti-lockdown protesters to bring firearms to State Parliament and execute Premier Daniel Andrews.

This is appalling and a wake-up call for all us. It is a warning to everyone involved in public debate. Any political party or interest group that seeks to inflame and exploit legitimate concerns for political purposes through inflammatory and divisive rhetoric or through flirting with extremists in the crowd is on notice. We need our politicians in particular to hold themselves to standards that put our democracy and peaceful disagreement beyond any cynical short-term gain.

All this has placed a shadow over what should have been a wonderful week for Victoria. It’s not the end of the pandemic – we all know that – but it should be the end of harsh and long lockdowns. As we emerge from our homes to get on with life, let our debates be passionate and robust, but let us have them with respect.