A mother jaguar who had caught an anaconda for dinner found herself fighting with her own cub over the tasty treat.

The cub and the mother were seen locked in a tug of war on a riverbank in Porto Jofre in the wetlands of Pantanal, southwest Brazil.

The adult jaguar had caught the anaconda and had gotten help from her cub to carry it across the river, when the five-month-old cub suddenly challenged her on the shore, according to the photographer who captured the battle. 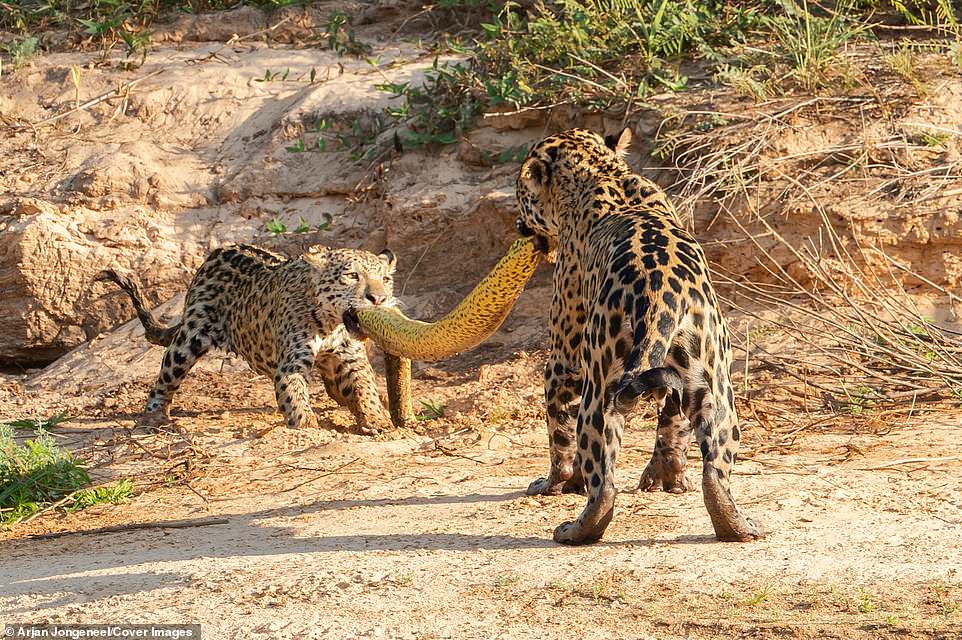 My anaconda: This mother jaguar and her cub were spotted fighting over an anaconda in Porto Jofre in Pantanal, Brazil 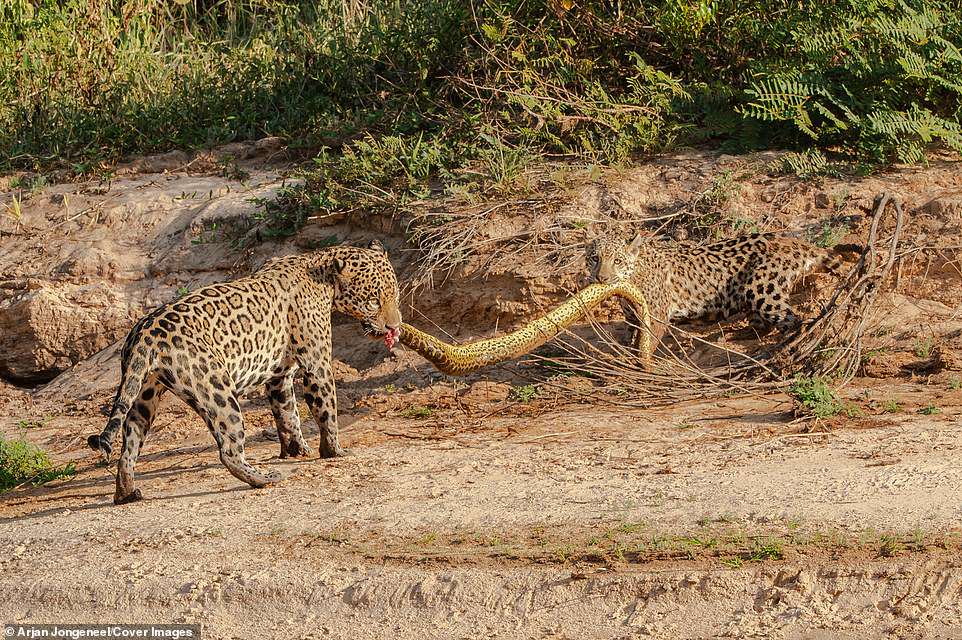 You caught us: The jaguars appear to be looking sheepishly straight into the camera while biting into the long snake

‘After a few hours looking for jaguars near Porto Jofre we came across a female jaguar and her five-month-old cub, says photographer Arjan Jongeneel, from the Netherlands.

‘We followed these charismatic cats for some time as they walked on the banks of the river looking for a prey.

‘Soon, the mum and cub disappeared in the bushes, and after a few minutes, there was lots of noise from the dry leaves on the ground.

‘We waited patiently and after a few minutes mum appeared on the edge of the river, slid down from the two metre (6ft 6in) high riverbank into the water. The cub followed and also went into the river.’ 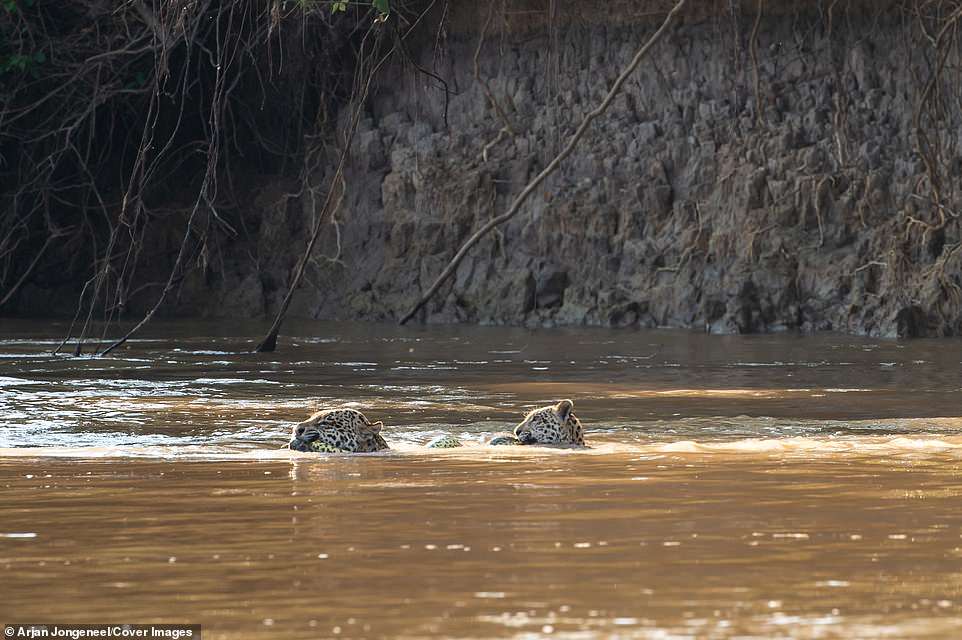 Dinner time! The pair were spotted swimming through the lake with the 16ft anaconda in their mouths 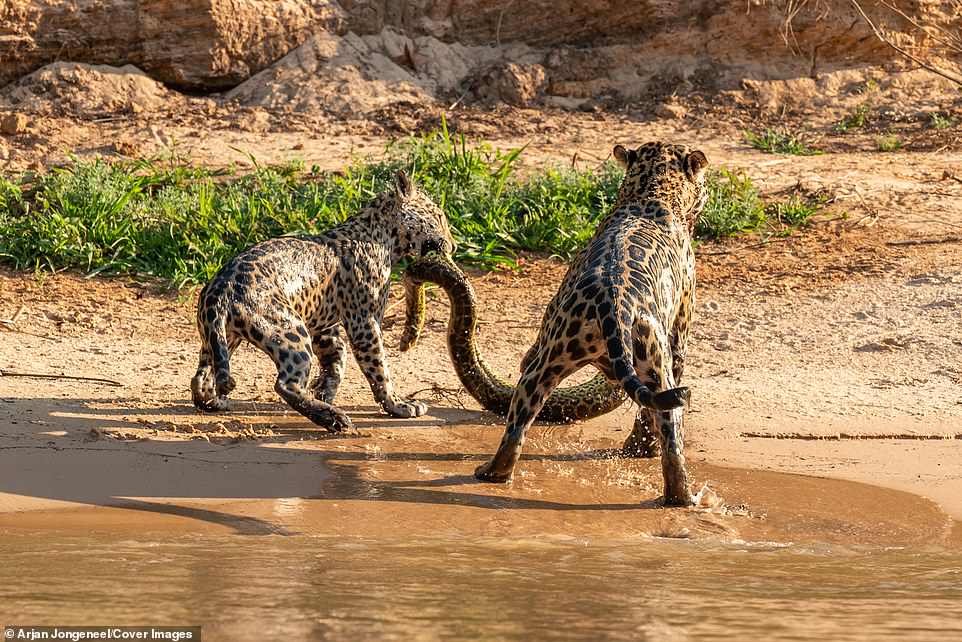 So it begins: They appeared to get along fine as they lugged the long yellow anaconda out of the river together 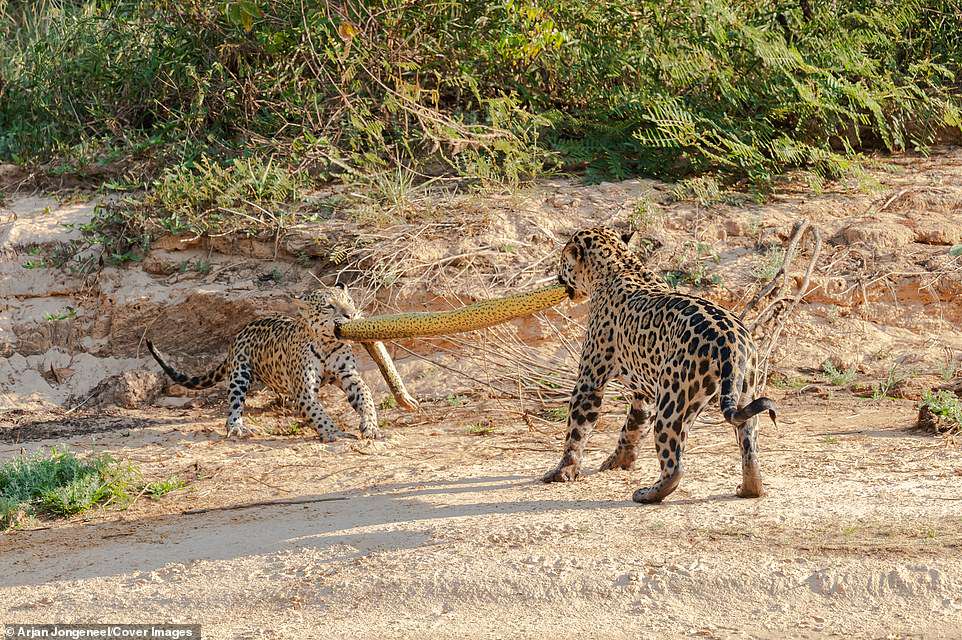 Mine! However, the mother and cub soon got locked into a tug of war, both pulling at the dead snake 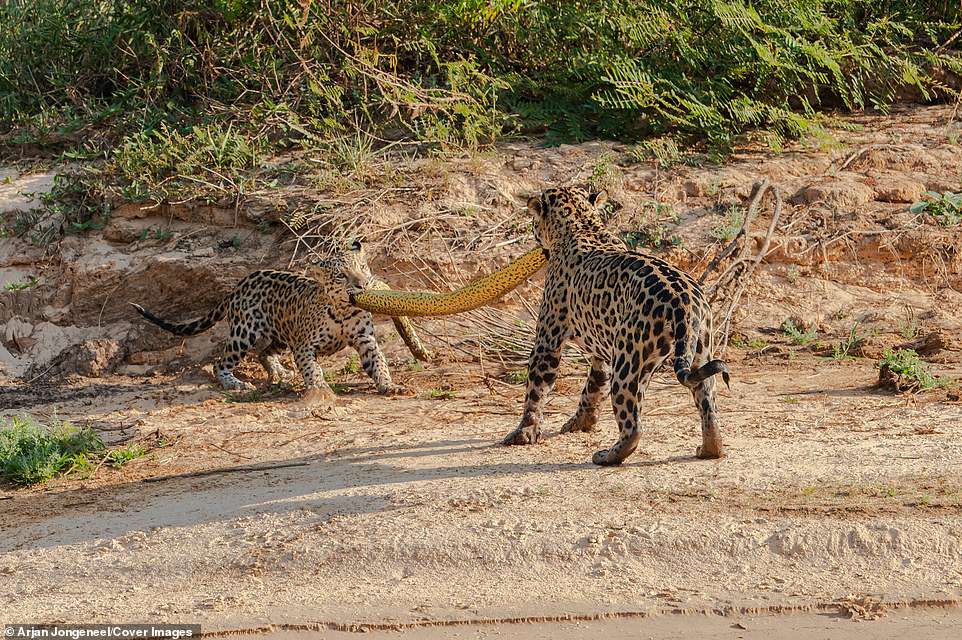 Give it to me! Photographer Arjan Jongeneel says the mother eventually let go of the snake and the cub disappeared with it

‘Both jaguars crossed the river. During the crossing, we noticed that the mum had something in her jaws.

‘As we looked closely, we saw that it was a large yellow anaconda; about five metres long (16ft). Swimming to her mother, the cub grabbed the anaconda with her jaws.

Mr Jongeneel said the pair arrived on the beach on the other side of the river, with both of the jaguars hanging on to the anaconda and refusing to let go.

‘The battle started, and both mum and cub were hanging onto the yellow anaconda, not giving in. After a while. mum let go and the cub proudly and swiftly disappeared with its prey’.