JANET STREET-PORTER: Prince Andrew is now so irrelevant he was invisible at his own daughter’s wedding but, be honest, ladies – haven’t most middle-aged men outlived their usefulness?

Prince Andrew is now so irrelevant he was invisible at his own daughter’s wedding but, be honest, ladies – haven’t most middle-aged men outlived their usefulness?

We know the Royals don’t do things like the rest of us, but Princess Eugenie’s wedding last weekend was a first. The father of the bride was nowhere to be seen. Normally, the royals like being photographed going about their business, supporting charity workers, launching boats, meeting pensioners and school kids and touring new hospitals. It shows they are ‘working’ and nurturing the special bond they have with commoners who contribute so much to their upkeep.

In so far as you could say royals have a ‘job’, work consists of being seen looking interested and alert, even when bored rigid. That’s the price they have to pay for the palaces, the flunkeys and all those lovely hats and frocks.

The exceptions are Harry and Meghan, who seem to have a love/hate relationship with the press, only wanting to be seen when it suits them, which is fine, now they have stepped down. 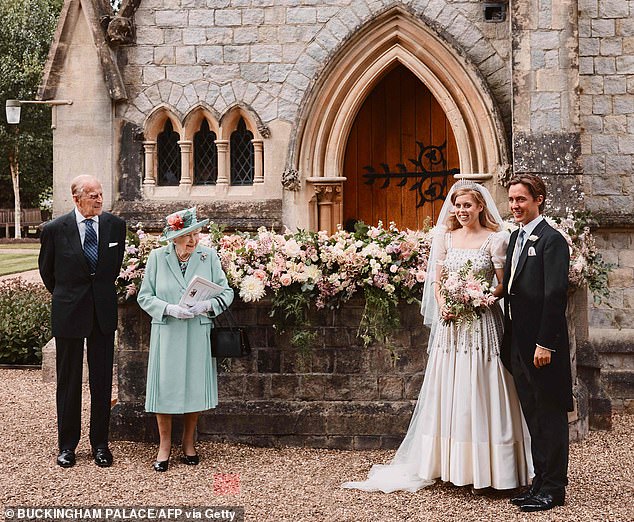 Prince Andrew is now so irrelevant he was invisible at his own daughter’s wedding but, be honest, ladies – haven’t most middle-aged men outlived their usefulness? Pictured: Princess Beatrice and her husband Edoardo Mapelli Mozzi stand next to the Queen and Prince Phillip on their wedding day

The Queen’s son, Prince Andrew, is in the top tier of royalty and his daughters- whether you think they are a couple of nice but dim Sloanes or not – are called Princesses, with all the pomp and deference that title delivers. The title gets the girls into all the best parties, private clubs, and fun events for the upper classes and in return they attach their names to various charities and good causes.

In toff circles, weddings are unmissable events where they all meet and flaunt their jewellery and designer shoes, while the rest of us ogle from afar.

For a pretty dim chap, Prince Andrew has managed to achieve a world first (at least in the circles his family moves in) by attending his daughter’s wedding AND BEING TOTALLY INVISIBLE. We’re told that he walked his daughter up the aisle – not very difficult as it took place in a small chapel, not a cathedral.

But he did not appear in any photographs. He was not seen arriving or leaving the ceremony or quaffing a beverage or nibbling on the finger food at the small drinks party held in his garden afterwards. All of which begs the question – was he really there at all?

As Andrew continues to stonewall US prosecutors by refusing to be interviewed about his friendship with Jeffrey Epstein, he has become a major embarrassment to his loyal mother, the Queen.

Now, his ‘close friend’ Ghislaine Maxwell sits in a horrible prison cell in Brooklyn, refused bail until her trial next year on charges of procuring under age girls for a paedophile (Epstein), even though her family were willing to provide millions for bail. 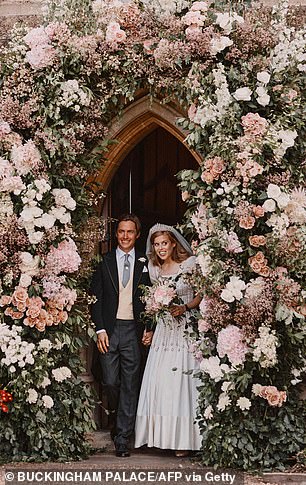 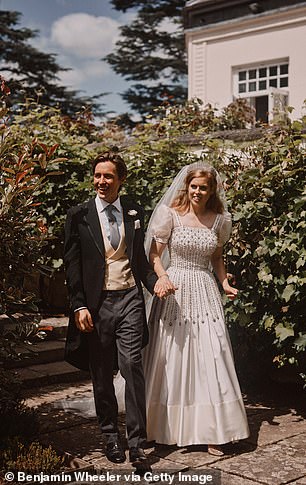 We know the Royals don’t do things like the rest of us, but Princess Eugenie’s wedding (pictured) last weekend was a first. The father of the bride was nowhere to be seen

Andrew is also condemned to internment, albeit in more salubrious surroundings. His crime is – at the very least – pig-headed stupidity and a serious lack of judgment.

Covid-19 provided a handy smokescreen, because Andrew could legitimately spend weeks legitimately ‘isolating’ at home in Royal Lodge, a few hundred yards from mum hunkered down in Windsor Castle.

Now lockdown has eased, he’s still in hiding. A while back, a picture of Andrew packing a bag of charity freebies for health workers was posted on social media, taken by a PA who works for his ex-wife. It also featured Sarah who (what a co-incidence) has a book coming out and is reading stories to children online.

A recent picture was snatched of Prince Andrew driving from the castle grounds, with a forced grin on his face, as if to say ‘look, I’m just going about my normal daily business’. He’s fooling no one.

So what does Prince Andrew actually do with his time? Charities have dumped him, and the golf courses where he used to spends most days have only recently opened – I suspect he’s spent the last few months playing computer games and listening to Sarah’s stories.

It’s obvious that he had very little (if anything) to do with his darling daughter’s wedding. Granny provided a beautiful frock as well as a couturier to remake it into a high fashion talking point which will no doubt end up in Vogue. The Queen’s son, Prince Andrew (pictured driving in Windsor on the day of the wedding), is in the top tier of royalty and his daughters- whether you think they are a couple of nice but dim Sloanes or not – are called Princesses, with all the pomp and deference that title delivers

Granny also provided an exquisite tiara. Elton John’s florist did the wonderful flowers. The groom was handsome and perfectly mannered. After the drinks party the Queen left early to bestow a knighthood on lovely Captain Sir Tom Moore – who shames her son in every way, by raising almost £33 million for NHS charities aged 100).

And perhaps things probably have got a bit more ‘exuberant’ in the hands of Sarah and co, with an iPod disco and glamping in the shrubbery at Royal Lodge.

In Andrew’s defence, it’s true that most fathers do nothing towards making weddings work – they don’t plan them, choose the clothes, the food, or the guests.

All they have to do is pay the bills, hold out their arm and walk a few steps supporting their daughters, without looking stupid. I presume even Andrew managed that.

My own father failed miserably when I married at Chelsea registry office. As we arrived, he was so nervous he shut my leg in the car door, leaving me screaming in pain as he went off to find a parking space.

Eugenie’s wedding was clearly planned and executed by a trio of well-organized women – the Queen, Sarah, Duchess of York and the groom’s mother – and it’s made me think, what use do men of a certain age have at all?

Lockdown and being confined to a restricted space with someone we might have fancied several decades (or even months) ago, exposes you to their faults in agonizing detail.

Andrew’s job, since the Emily Maitlis interview – in which he managed to dig a hole so big he can never crawl out of it- is to do what?

He doesn’t do housework or home decorating. He was someone who made friends with dubious characters (like Epstein) in order to get free meals and travel and meet more rich people who he could hang out with. Honestly, is that a career?

His daughters at least have real jobs (although they too have inherited his love of holidays) and his ex-wife is a never ending-catalogue of new projects and enterprises, all aimed at balancing her famously precarious grip on sensible spending. She’s flogged weight loss products and slimming clubs. She keeps on trying, and you could never accuse Sarah of not pushing herself forward. I love her, for this woman wears her faults on her sleeve. Andrew’s job, since the Emily Maitlis interview (pictured)- in which he managed to dig a hole so big he can never crawl out of it- is to do what?

How galling it must be at the home the couple share in the Royal Lodge, where Sarah is pounding out another story to bring in the cash and Andrew is slumped in a chair. All over the country, women can relate to that situation. Middle aged men are brilliant at . . . . can you even complete that sentence? Women work all hours as well as running the home. Men work on their expanding waistlines.

Prince Andrew has no skills, no mates and no redeeming features. And so many modern middle aged (and over) blokes are like that. That’s why women have drinks parties with their mates on zoom, binge watch Netflix…and only laugh when they’re talking to gay men or their girlfriends.

Young women have seen the future and are planning ahead- freezing their eggs and picking male donors from catalogues.

Soon, most men will be redundant. Andrew is just ahead of his time.