Washington: Before becoming President Joe Biden spoke so often, and with such nostalgia, about the old days of bipartisanship in the US Congress that some progressives in his party feared he was out of touch with the hyper-partisan realities of modern politics.

During the Democratic primaries Biden got in trouble for reminiscing about working with openly racist southern senators as an example of his ability to strike deals with his ideological adversaries. 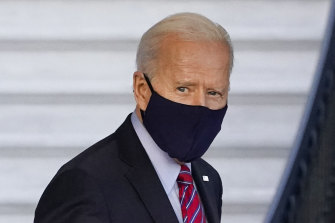 In a hurry: US President Joe Biden walks to board Marine One on the South Lawn of the White House.Credit:AP

During the presidential election campaign, Biden said: “We need to revive the spirit of bipartisanship in this country.”

Not long before his inauguration, he said: “I got criticised from the beginning for saying this, I think the nation’s looking for us to be united… I think I can work with Republican leadership in the House and the Senate. I think we can get things done.”

Some Democrats— burnt by Republican obstructionism during the Obama years — feared Biden would prioritise bipartisan deal-making over policy ambition.

From what we’ve seen so far from his presidency, they needn’t have worried. The self-styled pragmatist is governing as a progressive who’s in a hurry to get things done.

Biden has issued so many executive orders – including one banning the construction of a major oil pipeline and another allowing transgender Americans to serve in the military — that The New York Times editorial board has urged him to ease up.

And rather than demand a cross-party deal on his proposed COVID-19 relief package, Biden has given the go-ahead for Democrats to pass a massive spending bill along strict party lines.

In the early hours on Saturday (AEDT) Vice-President Kamala Harris cast her first tie-breaking vote in the Senate to ensure passage of Biden’s $US1.9 trillion ($2.4 trillion) COVID relief plan. No Republicans voted for the Senate bill and it was the same story later in the day when the House of Representatives approved the plan, which includes expanded unemployment benefits and tens of billions of dollars for vaccine distribution and school re-openings.

The relief plan has not yet become law, but House Speaker Nancy Pelosi said that could be achieved within weeks. 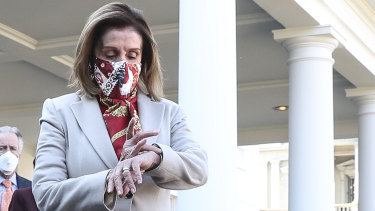 Time for action: US House Speaker Nancy Pelosi leave the White House after a meeting with President Joe Biden on the COVID relief package.Credit:Bloomberg

Democrats used a fast-tracked process known as “budget reconciliation” that allows the passage of legislation with a simple majority in the Senate rather than the usual 60 vote thresholds.

While Biden held a cordial two-hour meeting with 10 Republican senators in the White House last week, it’s clear he doesn’t think there’s a realistic chance of striking a sufficiently bold deal with them. The 10 moderate Republicans had proposed a funding package just a third of the size of Biden’s.

Biden is also adamant that the package must include $US1400 stimulus cheques to most Americans, though he was open to means-testing so that they are targeted to low and middle-income workers.

And Larry Summers, who served as Bill Clinton’s treasury secretary, penned an op-ed on Saturday (AEDT) saying Biden’s package was too expensive.

Republicans will use Biden’s lofty talk about bipartisanship against him – and they’ll have a valid point.

But Biden is banking on the fact that Americans care more about outcomes than process. He’s convinced that, while voters would like to see Republicans and Democrats work together, they’re more interested in getting cash in their pockets, their schools open again and the coronavirus pandemic brought under control.