Key events of US election day

The US election was still in the balance overnight. These are just some of the significant moments in an extraordinary day of politics.

Or so it goes. The last time Ohio got it wrong was the 1960 election of John F Kennedy. In fact, no Republican has ever won the presidency without claiming Ohio.

The Associated Press called the state, which has a tidy 18 Electoral College votes, for Trump just before 4.30pm AEDT, or 12.30am on the US eastern seaboard. 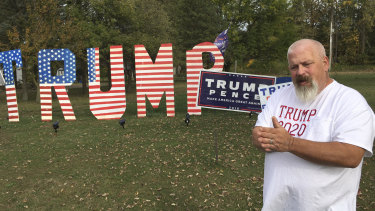 Mike Devore poses near a sign he made to show his support for President Donald Trump in Wayne, Ohio.Credit:AP

With 29 electoral votes, Florida was the nation’s most prized battleground state. It was heavily leaning Trump shortly after polls closed and was called by the AP about 4.30pm (AEDT). 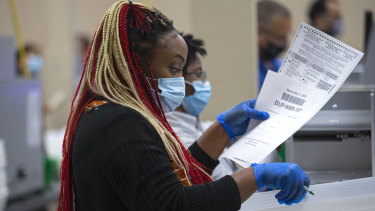 Election officials counting votes in Lauderhill, Florida, as the electoral prize of Florida appeared to slip out of reach of Joe Biden. Credit:AP

In a short post-midnight address to supporters from Wilmington, Delaware, Biden told Democrats to "keep the faith" and be patient for results.

Crucial swing states were still in play when Biden made his remarks. Florida had been officially called by the AP just minutes earlier.

"We knew this was going to go on, but who knew we were going to go into maybe tomorrow morning, maybe even longer" he said. "Look, we feel good about where we are."

Biden also declared the Democrats would take the swing state of Pennsylvania. 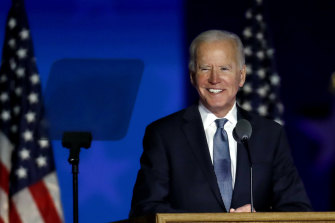 Trump won Texas and its 38 electoral votes, breaking the hearts of Democrats who believed they could flip the state to Biden.

While always a difficult task for the Democrats (Trump won Texas by 9 percentage points in 2016), an avalanche of early votes showed Biden running unusually close. 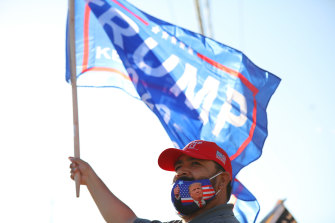 A person in a protective mask waves a flag in support of US President Donald Trump outside at a polling station in Houston, Texas.Credit:Bloomberg

Trump has never said he would leave the White House peacefully if results went to Biden. After midnight (EST) the President further stoked the flames on Twitter.

"We are up BIG, but they are trying to STEAL the Election. We will never let them do it. Votes cannot be cast after the Polls are closed!" Twitter labelled the post as potentially misleading.

Despite a strong push by Trump, Biden carried the state narrowly won by Hillary Clinton in 2016.

While only offering 10 Electoral College votes, Minnesota was seen as one of the major battlegrounds and up for grabs by either candidate.

Trump came within 1.5 percentage points of carrying it in 2016, with Republicans investing considerable time and money in an effort to turn the state this time around. 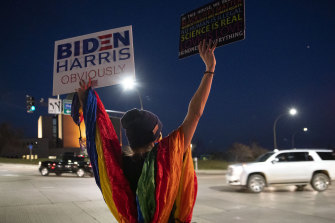 By noon on the US eastern seaboard, the cyber security agency at the Department of Homeland Security said there were no outward signs of any malicious activity.

No other major problems arose on Tuesday, outside the typical glitches of a presidential election. Some polling places opened late and robocalls provided false information to voters in Iowa and Michigan.

However, Republicans in Pennsylvania were trying to block the counting of thousands of ballots that arrived in county offices on Wednesday, Thursday and Friday. 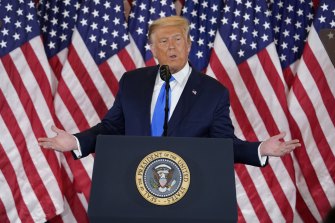 President Donald Trump speaks in the East Room of the White House, early on Wednesday.Credit:AP

In a 2.30am press conference at the White House, Trump claimed he would win the election, while sowing more doubt about the vote counting.

"As far as I'm concerned, we already have won," he said.

He claimed North Carolina, Georgia and said Pennsylvania was "not even close".

"We don't need all of them," he said, listing all the battleground states in which he expected to claim victory.

"And all of a sudden everything just stopped," he claimed. "This is a fraud on the American public. This is an embarrassment to our country. We were getting ready to win this election. Frankly, we did win this election," he said adding he would launch legal action to stop vote counting.

"We want all voting to stop. We don't want them to find any ballots at four in the morning and add them to the list, OK?"