The sick clip was circulated on social media and shows a young man throwing the terrified pet into the water off the coast of Falmouth, Cornwall.

Shrieks of laughter can be heard from the person filming the shocking incident.

The helpless dog is seen flailing in the air before splashing into the cold sea below.

It then swims towards the shore, although the footage ends before it shows whether or not the poor pooch makes it to safety. 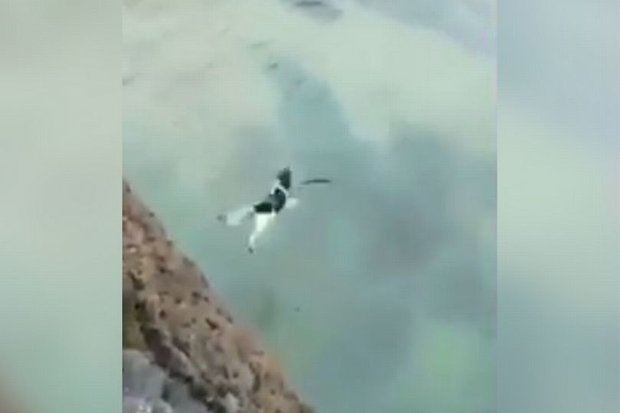 Despite rumours circulating on social media that the dog had broken its back and been put to sleep, cops later confirmed the dog was uninjured.

Police reminded people again not to seek vengeance on those responsible.

“We are aware of threats that have been made online would urge members of the public to leave this investigation with the police, and not to take the law into their own hands,” it said in a statement.

The RSPCA said: “We’d like to thank everyone who has reported this to us so far and would urge any eyewitnesses or anyone with further information to ring the RSPCA inspectorate appeal line on 0300 123 8018 to help us with our ongoing investigation.”