Beirut: Lebanon and Israel have agreed to open their first negotiations on nonsecurity issues in three decades, a rare if limited breakthrough between hostile neighbours that are technically at war and have no formal diplomatic relations.

Talks aimed at ending an enduring dispute over their maritime boundary in a patch of the Mediterranean Sea rich with natural gas are expected to begin this month, officials from both countries said on Thursday. 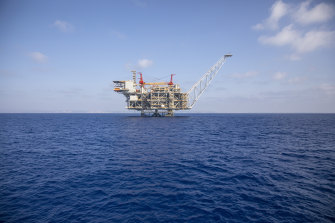 Israel’s offshore Leviathan gas field in the Mediterranean Sea. Lebanon and Israel have reached an agreement on a framework of indirect talks over a longstanding disputed maritime border between the two countriesCredit:AP

The talks, to be held under the auspices of the United Nations and mediated by the United States, were announced just weeks after the United Arab Emirates and Bahrain normalised relations with Israel, becoming the third and fourth Arab countries to do so. But officials involved in the maritime talks said a diplomatic accord between Lebanon and Israel was not on the table.

Secretary of State Mike Pompeo congratulated the parties on the agreement, saying in a statement that the talks "have the potential to yield greater stability, security and prosperity for Lebanese and Israeli citizens alike."

The United States has sought to mediate the dispute for years, with little progress. But senior US officials, including Pompeo, visited Lebanon this year and have repeatedly raised the issue with Lebanese officials.

The breakthrough came as Lebanon faces a punishing economic crisis and could benefit from the undersea gas. Its currency has lost 80 per cent of its value over the past year, poverty and unemployment have spiked, and its ratio of debt to gross domestic product is about 170 per cent, one of the highest in the world. 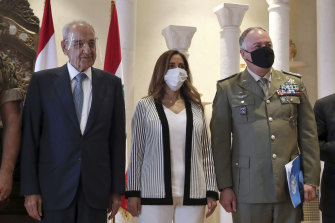 In August, a powerful explosion in the port of Beirut killed more than 190 people and destroyed large swaths of the capital, compounding the misery.

Nabih Berri, the speaker of Lebanon's parliament and the country's senior Shiite politician, announced the agreement in Beirut, suggesting that gas from near the disputed area could "help us pay our debt."

The dispute is over 855 square kilometres of the Mediterranean that Israel and Lebanon both claim to be within their exclusive economic zones.

The stakes of the disagreement have risen as Israel and Cyprus have begun exploiting offshore gas in the eastern Mediterranean, leaving the Lebanese searching for a similar, and much-needed, boost to their economy.

Israel's offshore gas has enhanced its energy independence and earned it export contracts with Jordan and Egypt worth billions of dollars, although demand has flagged this year because of the coronavirus pandemic.

The amount of gas in Lebanon's offshore zone remains unclear, although the government has signed exploration contracts with foreign firms.

Israel's Energy Ministry said in a statement that the talks would be the first negotiations between the two countries on a civilian matter in 30 years.

Officials from the two countries meet regularly under the auspices of the United Nations in southern Lebanon to address security issues along their shared border.

That appeared to be the template adopted for the maritime border talks, which will be held in a UN headquarters in the Lebanese town of Naqura, near the Israeli border, David Schenker, the US assistant secretary for near eastern affairs, told reporters.

The talks were expected to start the week of October 12, he said, although the exact date had not been determined. Nor was it clear how long they would last.

"We hope Lebanon will be a global capital of natural gas and will develop all of its natural resources," said Yuval Steinitz, Israel's energy minister, who will lead the Israeli delegation in the talks. "We don't want to see Lebanon collapse."

He did not expect the talks to lead to swift breakthroughs on other issues dividing the two countries.

"I don't think Lebanon is going to become Abu Dhabi because of this," he said, referring to the capital of the Emirates. "I don't have any illusions."

It was not immediately clear who President Michel Aoun of Lebanon would appoint to represent Lebanon.

Israeli forces invaded Lebanon twice to try to uproot Palestinian militants during Lebanon's 15-year civil war, which ended in 1990, and Israel occupied a chunk of southern Lebanon until 2000. In 2006, Israel fought a bloody 34-day war with Hezbollah, the Lebanese militant group and political party that the United States, Israel and other countries consider a terrorist organisation.

Since then, the border has been mostly quiet, but the rancour remains. Lebanese television stations often refer to Israel as "the enemy" and most Lebanese avoid mixing with Israelis abroad for fear of being accused of treason at home.

Berri, the speaker of Lebanon's parliament, heads a political party closely allied with Hezbollah, and the US Treasury Department sanctioned one of his top aides, Ali Hassan Khalil, last month for supporting Hezbollah.

The mechanics and scope of the talks appeared to be unsettled.

Steinitz, the Israeli energy minister, said the talks would be "face to face," while Lebanese officials said they would not speak directly to Israelis.

Assaf Orion, a retired Israeli brigadier general who took part in postwar talks with Lebanon starting in 2006, said that when those meetings began, the Lebanese "made a fuss" about sitting in the same room as the Israelis but then settled for separate Israeli and Lebanese tables, with a UN table in the middle.

Initially, the Lebanese refused to speak directly to the Israelis, telling the UN officials what message to pass along, even if the Israelis could hear the Lebanese speaking, he said. Eventually, they started speaking to each other directly.

Berri said the negotiations would also touch on the disputed land border, while Israel and the United States mentioned only maritime borders.

In response to a question, Schenker said the United States would welcome any steps by Israel and Lebanon to reach agreement on the land border.

The new talks are significant, Orion said, because they would go beyond security issues.

"This is the first time we are going beyond the narrow scope of military, security and defence issues and moving to a wider scope of energy and border discussions," he said.

The resulting agreement could even exclude offshore facilities from being targeted in war, he said.